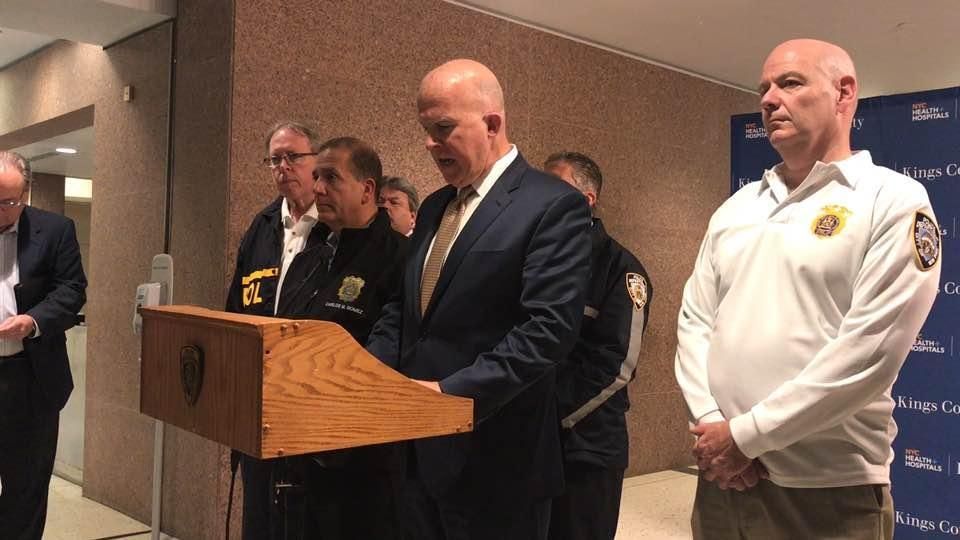 NYPD Police Commissioner James O'Neill spoke Sunday, June 4, 2017, at Kings County Hospital in Brooklyn, where NYPD Officer Dalsh Veve was hospitalized with injuries after he was dragged for more than two blocks by the driver of a stolen car from Valley Stream. (Credit: Newsday / Matthew Chayes)

A decorated NYPD officer from North Baldwin was “fighting for his life” and remained in critical condition early Monday from injuries he sustained when he was dragged by a stolen car for two-and-a-half blocks in Brooklyn, authorities said.

Officer Dalsh Veve, 35, a nine-year veteran, fired his gun as he was being dragged Saturday night and struck one of the stolen car’s occupants, a 15-year-old boy, in the face, police said.

“It appears that Police Officer Veve was able to discharge his service weapon twice while being dragged,” NYPD Commissioner James O’Neill said at a news conference just after sunrise Sunday at Kings County Hospital Center, where Veve was taken for surgery.

The 15-year-old later “walked into Brookdale Hospital [and] said he was shot,” O’Neill said. The NYPD said Monday morning the teen was in stable condition. His identity was not immediately released.

O’Neill declined to elaborate on how the NYPD connected the teen to the stolen car, a black Honda sedan, or whether investigators believe the wounded boy was the driver or a passenger.

Two other people in the Honda, which was stolen from Valley Stream a few days ago, have been charged with hindering prosecution, police said Monday morning. The two people, both women, were identified as Eboni Clinton, 19, and Jeron Oliver, 18, both of Brooklyn, police said.

Mayor Bill de Blasio said Sunday that Veve — a married father of a 2-year-old girl described by his superiors as an “exemplary” officer — had surgery and was “fighting for his life.”

Veve, assigned to the 67th Precinct in East Flatbush, is considered a “superstar” there, according to a law enforcement source.

“This is a young man who, according to everyone I spoke to last night at the hospital, including his precinct commander, has had an exemplary career over the last nine years as an NYPD officer — one of the most commended and decorated members of his precinct,” de Blasio said.

“He represents the American dream: an immigrant child who came here and joined the greatest police force in the country and has been an exemplary officer,” the mayor said.

De Blasio said of Veve’s wife, who was at the hospital along with other family members Sunday: “Her strength was clear. And her pain was clear as well.”

On Veve’s Baldwin block Sunday, he was praised as an ideal neighbor — friendly and always willing to assist with chores like snow removal or moving furniture.

In the winter, he used his ride-on plow to clear neighbors’ walks and helped with other chores, usually without being asked, said Martha Forrisi, who lives two doors down.

On Mother’s Day this year, Veve bought Forrisi a hanging plant with vibrantly colored flowers, delivering it to her doorstep with his 2-year-old daughter.

“It’s horrible,” she said of Veve being injured. “I just hope he’ll be OK. He’s such a good person.”

Officials declined to specify Veve’s injuries, but New York City Councilman Mathieu Eugene, a Veve family friend, said outside the hospital Sunday afternoon that the officer was resting after surgery.

Eugene said he knows Veve and his family from Cap-Haïtien, Haiti, where they lived in the same neighborhood.

The officer’s brother, Jean Pierre Veve, described the wounded officer as a “great man” in brief comments as he left the hospital Sunday afternoon.

“This is a great family,” he said.

O’Neill, in the news conference, said the chain of events began at about 11:50 p.m. Saturday, when six cops in plainclothes from the 67th Precinct went to Tilden Avenue and East 53rd Street to investigate three 911 calls reporting gunshots. Upon interviewing people there, the officers concluded that the noise had been fireworks from a nearby party. The Honda was parked across the street at a fire hydrant, and Veve began questioning the occupants. That’s when it sped off, “dragging Police Officer Veve for two-and-a-half blocks before the officer became free and fell on the street.”

Veve discharged his weapon twice, then fell, and the car kept going but soon crashed at East 53rd Street between Snyder and Church avenues, O’Neill said. The occupants abandoned it and fled.

The 15-year-old Veve shot is a Brooklyn resident and has a significant arrest record for his age — the most recent arrest was last month for grand larceny, a law enforcement source said.

Patrick Lynch, the president of the rank-and-file’s labor union, said at the hospital that the other officers on the scene acted “heroically” when they “lifted him up and got him here.”

Neighbor Dorothy Stephan, 63, said she prayed for Veve when she went to church Sunday morning. “If you need help, he will offer,” she said. “He’s in everybody’s prayers.”

Jim Gover said his dog often played with Veve’s two pit bulls and he had loaned the officer tools as he worked to renovate his house, where he moved about five years ago.

Gover, 60, said Veve told him he worked plainclothes on narcotics and gangs. He didn’t talk too much about work, but when neighbors pointed out “sketchy” people and when there were gang tags on a stop sign, Veve told him: “I’m aware of it.”

The fact that a police officer lived on their block, neighbors said, gave them a strong sense of security. But Veve’s community spirit and always-willing-to-help attitude made him extra special, they said.