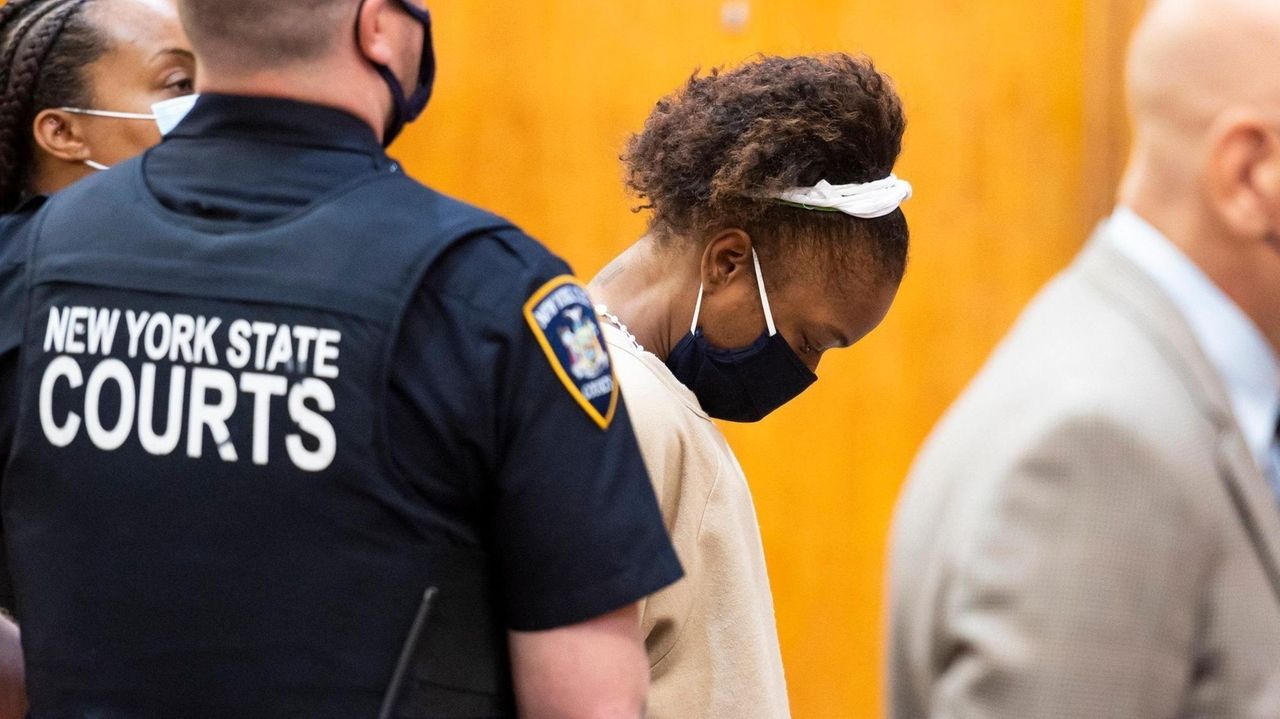 The Hempstead woman accused of hitting and killing an NYPD officer while driving drunk on the Long Island Expressway last month drove recklessly through Queens as she fled from police, rammed a patrol car and nearly hit another cop, prosecutors said Tuesday.

Jessica Beauvais, 32, hit Officer Anastasios Tsakos so hard on April 27 that his body flew 100 feet before he landed on a grassy shoulder of the expressway, prosecutors from Queens District Attorney Melinda Katz’s office said at her arraignment in Queens Supreme Court.

"Why did my first accident have to be a cop?" Beauvais later asked police, according to prosecutors. "Not that I wanted it to be anyone else, but, like, [expletive], I’ve been driving since I was 16."

Justice Michael Aloise ordered Beauvais, who was charged with aggravated manslaughter and other charges in a 13-count indictment unsealed earlier this month, to continue being held without bail and to be returned to court on July 27.

Beauvais' windshield was caved in, and the hood and roof of her Volkswagen Passat were damaged, according to prosecutors. She sped away from the scene, nearly hitting another officer who was gathering evidence related to an earlier crash.

Beauvais sped through a red light and drove on the wrong side of the road to evade capture, then rammed a patrol car in effort to escape, prosecutors said Tuesday.

The woman pleaded not guilty at the arraignment. Her attorney, Jorge Santos of Queens, declined to comment after the court proceedings.

Beauvais claimed she did not know why police had pursued her. "I don’t deserve this," prosecutors said Beauvais told police. "What did I do?"

The accused driver later acknowledged that she had smoked marijuana and drunk wine and vodka prior to the accident, according to prosecutors.

"I did hear a thump so I knew I hit something but I didn’t see what it was," she allegedly told police.

Law enforcement executing a search warrant on Beauvais’ vehicle later found Tsakos’ Highway Safety pin and a notepad in the Passat, according to the prosecutors. "There is no doubt that this defendant's vehicle struck and killed a New York City police officer," prosecutors said.

"You can imagine how difficult it was for Officer Tsakos’ parents to sit in that courtroom ... " Lynch said during a news conference outside the Queens courthouse after Tuesday’s arraignment.

Beauvais, wearing a khaki jail uniform, did not speak during the hearing but she acknowledged 14 relatives and supporters as she entered the courtroom and was openly weeping as she looked at her family members while being led away by court officers. Beauvais’ family declined to talk to reporters.

Tsakos and other officers had responded to the scene of a one-car crash on the Long Island Expressway ramp entrance to the Clearview Expressway on April 27, the NYPD said. A driver headed eastbound on the LIE lost control of the vehicle and slammed into a wall and caught on fire. The driver and two passengers had to be pulled from the vehicle, while a third passenger died at the scene.

The driver, Jonathan Espinal, 24, of Queens, was driving with a suspended license and was charged with aggravated unlicensed driving.

Tsakos was directing traffic when Beauvais, driving a 2013 Passat eastbound on the expressway and speeding, approached the scene of the crash, drove over traffic cones and hit Tsakos, prosecutors said.

Tsakos was taken to a nearby hospital, where he was pronounced dead.

Beauvais’ blood-alcohol content was 0.15%, nearly double the legal limit of 0.08% in New York State two hours after the crash, according to prosecutors. She faces up to 15 years in prison if convicted.

Tsakos, a father of two, was posthumously promoted to detective. His funeral drew thousands of police officers and supporters to a Greenlawn church earlier this month.

"Imagine going to work one day and never coming home," said Lynch, standing with Tsakos’ parents in front of the courthouse after the hearing. "Imagine the plans you had for your children later on that day and never come back to do it."

Lynch said the officer's family will struggle with grief and loss for the rest of their lives.

"They know the pain will never go away regardless of what happens in the courtroom," Lynch said.

Hempstead woman indicted in hit-run that killed copThe woman accused of striking the officer while driving intoxicated on the LIE was charged with aggravated manslaughter, vehicular manslaughter and other crimes in a 13-count indictment, said Queens District Attorney Melinda Katz. NYPD: Highway officer from LI dies after hit-and run on LIEA veteran NYPD officer from Long Island - described by police as "the best of the best" - was struck and killed by an alleged drunken driver whose blood-alcohol level was nearly twice the legal limit on the Long Island Expressway in Queens early Tuesday morning, authorities said. 'He had his whole life ahead of him': Brother remembers fallen NYPD officer from LI"My brother was an amazing guy," Teddy Tsakos, 42, said in a phone interview with Newsday as he prepared to board a plane to New York from North Carolina. "He had his whole life ahead of him. It was cut short."

Cuomo: State relaxing documentation rules in rent relief app: Cuomo
Adelphi says all students must take COVID-19 jab by fall
1:59
Bellone: Suffolk Police Department to discipline two officers involved in misconduct
2:47
Grieving wife's dilemma: How to tell her children their dad is gone
1:19
Jones Beach lifeguard reports being bitten by shark
Forecast: Sunny Tuesday but then rain will arrive
Didn’t find what you were looking for?