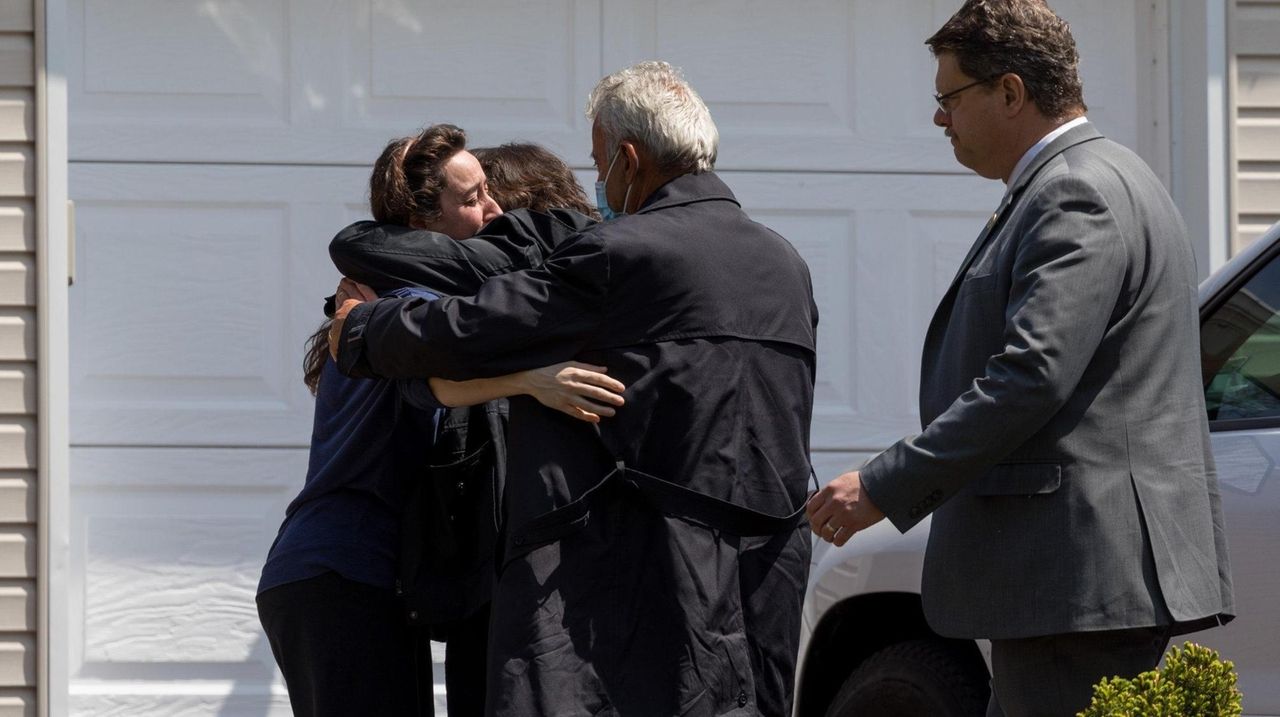 NYPD Officer Anastasios Tsakos was killed Tuesday by an alleged drunken driver. Blue ribbons lined the street of his East Northport home Wednesday in support, while those who knew him or worked with him are dealing with the shock of his death. Newsday's Chelsea Irizarry reports. Credit: Newsday staff; NYPD; Photo Credit: Tsakos family

Funeral services will be held next week for Anastasios Tsakos, the NYPD police officer from East Northport who was killed by an alleged drunken driver while directing traffic after an accident on the Long Island Expressway.

"Everyone is just numb and out of words," said Teddy Tsakos, brother of the fallen officer on a day when their parents arrived from Greece and neighbors put up blue ribbons to honor the father of two they knew as "Tasso."

Teddy Tsakos, 42, said a wake for his brother will be held May 3 at Saint Paraskevi Greek Orthodox Shrine Church in Greenlawn while a funeral will be held at the church May 4.

A 14-year-veteran of the NYPD, Tsakos, 43, was killed early Tuesday after he was struck by a Hempstead motorist who told detectives she had smoked marijuana and drank wine and tequila before the fatal crash, according to court papers.

'He had his whole life ahead of him': Brother remembers fallen NYPD officer from LI

Tsakos was directing traffic at the scene of a separate fatal crash on the LIE when he was struck by a vehicle driven by Jessica Beauvais, 32, who fled and rammed a police vehicle before being arrested, authorities said.

A law enforcement official said Tsakos and other officers saw Beauvais' vehicle approaching at a high speed as it swerved around a tractor trailer, barreled through traffic cones set up to divert vehicles and struck Tsakos with great force.

Beauvais was driving on a suspended license and had a blood alcohol content of 0.15% — well above the state’s 0.08% legal limit — when she was tested more than two hours after the crash, prosecutors said. She has been charged with vehicular manslaughter and other offenses. Her defense attorney, Jorge Santos, could not be reached for comment Wednesday.

The Tsakos family set up a GoFundMe page to support Anastasios Tsakos' widow, Irene, their 6-year-old daughter and 3-year-old son. As of Wednesday evening, the site had raised more than $80,000.

"Anastasios Tsakos, also known as Tasso, was taken from our family way too soon," a message on the GoFundMe site said. "A 32-year-old woman was beyond senseless, took the wheel under the influence and struck Tasso instantly. … Tasso has left behind two beautiful children and a wonderful wife. Words cannot describe the emptiness his family and dearest friends feel. He was the light in many lives."

The family urged New Yorkers to think twice before driving while intoxicated.

"We ask that everyone thinks before getting behind the wheel of a vehicle under the influence," the GoFundMe page said. "Think about what effects it may have on someone’s family, friends, and colleagues."

A separate fundraiser set up by a crowdfunding platform for police and military families has additionally raised nearly $40,000.

Patrick Kalmera, 40, who lived next door to Tsakos, said he’s been "numb" since learning of his friend’s death. He recalled watching Tsakos, who moved into the neighborhood last summer, playing outside with his two kids.

"Tasso was special," Kalmera said. "He was different. A different kind of guy. Very warm. If you knew him you’d know what I mean. We lost a very good person."

On Wednesday afternoon, Anastasios’ parents, Stavros and Anna, arrived at the East Northport home with a police escort after traveling from Greece. The couple had a long embrace in the driveway with an unidentified female family member and entered the home without speaking to the media.

Throughout the day, friends and neighbors delivered platters of food to the family.

"These children lost their father and this woman lost her devoted husband," Winters said. "It’s just the saddest thing that can happen to a family."

Hit-and-run suspect apologizes after LIE crash that left NYPD officer from LI deadA veteran NYPD officer from Long Island — described by police as "the best of the best" — was struck head-on and killed by an alleged drunken driver whose blood alcohol content was nearly twice the legal limit on the Long Island Expressway in Queens, authorities said.

Judge: Spota, McPartland face 57 to 71 months under federal sentencing guidelines
Group withdraws plans to redevelop Dowling aviation campus
Assembly panel will 'soon consider' impeachment articles against Cuomo
1:37
'A weight and a blessing,' says daughter who takes over the reins at LI church
2:12
Cases again near 600 on LI, hospitalizations up, NY figures show
State: Districts can return to local control on masking, social distancing
Didn’t find what you were looking for?