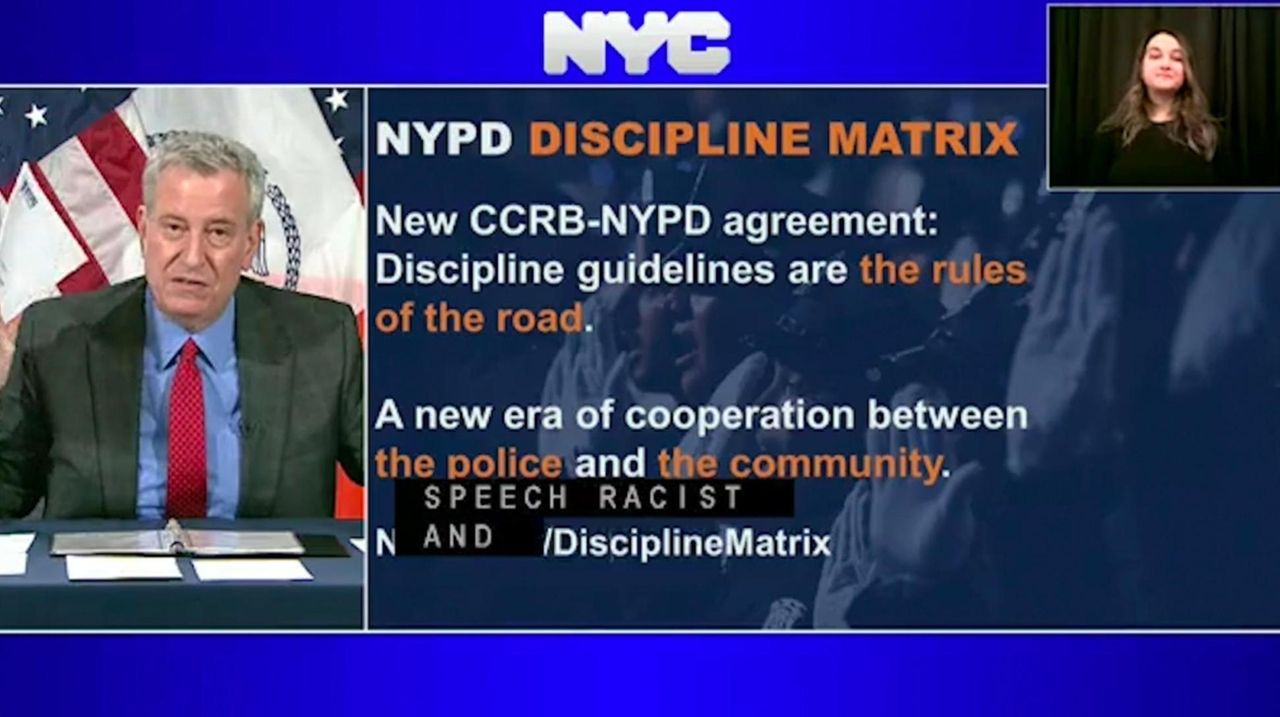 On Thursday, Mayor Bill de Blasio announced an agreement between NYPD and CCRB over how discipline will be delivered to New York City officers who use excessive force or engage in biased policing. Credit: NY Mayor's Office

The New York City Police Department and the Civilian Complaint Review Board have agreed to use a disciplinary "matrix" to govern how police officers found guilty of misconduct will be punished, the latest in an effort to increase and bring transparency in policing, officials said Thursday.

The matrix, which became effective on Jan. 15, spells out the range of presumptive penalties NYPD officers will face, ranging from termination for use of the banned chokehold to loss of some vacation days for minor infractions of department rules.

Under law, the police commissioner is the final arbiter of what penalty a guilty officer would face and the matrix allows for the commissioner to deviate — either upward or downward — from the prescribed penalties in limited circumstances. Mayor Bill de Blasio announced the agreement at a new conference Thursday.

While the NYPD has the ability to impose discipline on officers for corruption and other violations, the CCRB is empowered to investigate certain civilian complaints about use of force, abuse of authority and abusive language and recommend an officer be disciplined. Such discipline may be given out after a departmental trial or following a negotiated settlement with the officer.

At the news conference with de Blasio, Rev. Frederick Davie, head of the CCRB, said the latest memorandum of understanding [MOU] between his agency and the NYPD on the matrix was "unprecedented in the history of police discipline in New York City."

Davie said that the MOU will give the CCRB guidance its needs when recommending charges against an officer and assures the NYPD will adhere to the schedule of penalties.

The MOU specifies that the NYPD will accept CCRB recommendations on punishment in administrative trials where there is a guilty finding, except in "extraordinary circumstances" determined by the commissioner, including mitigating and aggravating factors and a different recommendation by the administrative judge.

NYPD Commissioner Dermot Shea, who is recuperating from coronavirus, wasn’t at the news conference.

The disciplinary recommendations were inspired in part by the sentencing guidelines used by federal judges. The development of a matrix was recommended in 2019 by a panel led by former federal prosecutor Mary Jo White, whose group found the NYPD disciplinary process was fair but not transparent enough.