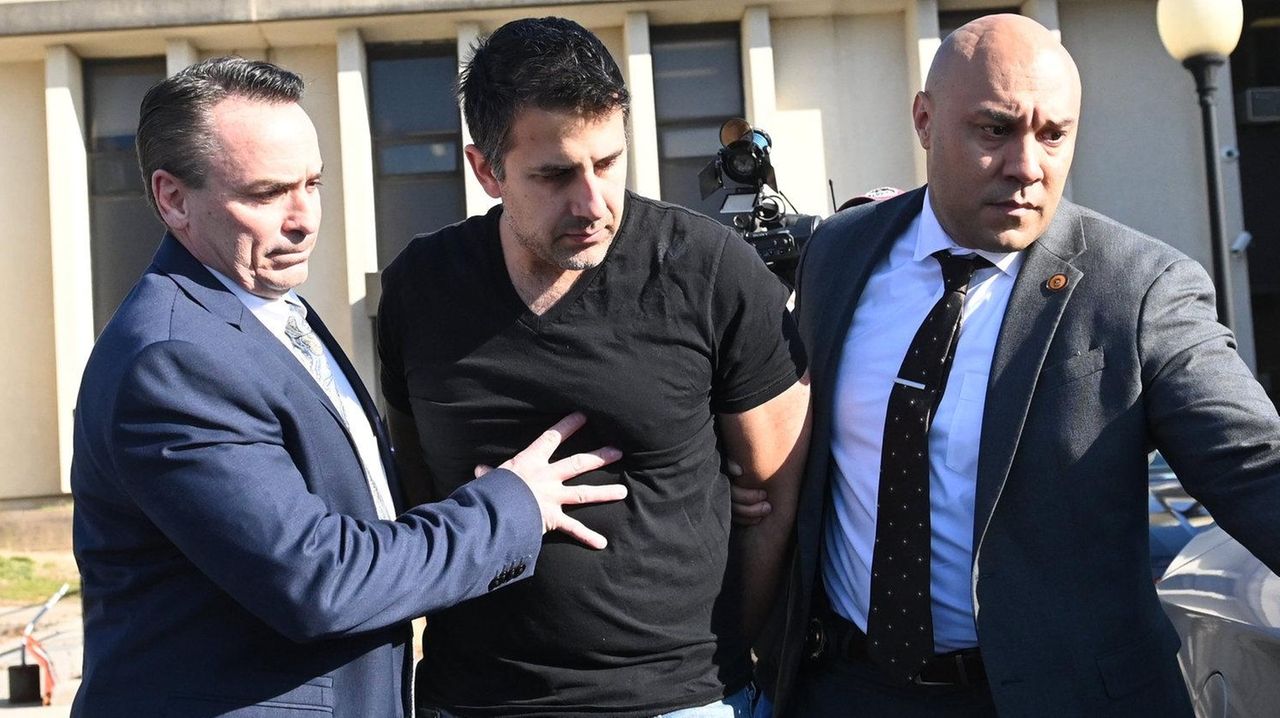 Thomas Valva died Jan. 17 in his father's custody after he was allegedly forced to sleep in the unheated garage of his Center Moriches home when the temperature fell to 19 degrees outside. On Monday, Suffolk County officials announced an investigation into how the county's Department of Social Services handled the case. Credit: Newsday / Cecilia Dowd; James Carbone, Stringer News; Photo Credit: Suffolk County Sheriff, Justyna Zubko-Valva

Suffolk County is launching a “top-to-bottom” internal probe of how the county’s Department of Social Services handled the case of an 8-year-old Center Moriches boy who died while in his father’s custody after allegedly being forced to sleep in an unheated garage.

Suffolk County Executive Steve Bellone said in a Monday evening news release that a committee will examine how DSS dealt with abuse allegations against NYPD Officer Michael Valva, 40, and his fiancee, Angela Pollina, 42, concerning the six chidren who lived with them. They were charged last week with second-degree murder in the death of one of those children, Thomas Valva.

They are accused of forcing the boy to sleep in the unheated garage when the outside temperature was 19 degrees. When the boy arrived at the hospital on the morning he died, his body temperature was just 76 degrees, Suffolk Police Commissioner Geraldine Hart said. His cause of death was ruled to be hypothermia.

The committee doing the internal probe of DSS will also work with the New York State Office of Children and Family Services as it conducts an independent review of the case, along with the Suffolk County District Attorney’s Office, which is handling the ongoing criminal prosecution, the release said.

Among the 10 members of the task force are child advocates, autism and family violence experts and county lawmakers.

“As a parent, I am horrified by what happened to this beautiful boy,” Bellone said. “As county executive, I want to know if there is anything else that could have been done under existing law to prevent this from happening. Beyond that, I want to know if anything in this case suggests that changes should be made to existing policy or law.”

Bellone said the committee doing the internal probe will be made up of county officials and administrators with backgrounds in social services and family court matters. It will be headed by Frances Pierre, who became Suffok’s DSS commissioner last year.

Both Michael Valva and Pollina appeared in Suffolk County Family Court Monday to answer the allegations of severe abuse to their six children, including Thomas.

Suffolk County's CPS had filed petitions alleging the abuse last week after criminal charges were lodged against the couple. They appeared briefly at their arraignments and through their attorneys issued denials — akin to a not guilty plea in criminal court — and are due back in Family Court on Feb. 13.

Suffolk County Family Court Judge Frank Tantone also continued the custody arrangement for the surviving Valva sons — Anthony, 10 and Andrew, 6 — who have been living with their mother, Justyna Zubko-Valva, 36, of Valley Stream, since last Wednesday when Tantone awarded her emergency temporary custody.

Zubko-Valva, who is representing herself in the proceedings despite Tantone's offer of a court-appointed attorney, said she was emotional standing mere feet from the people accused of killing her son.

"Standing next to them I just kept thinking about my baby and the way he was abused and it was just breaking my heart," she said. "I pray to God that Tommy, his death, is not going to go in vain."

Tantone, after an hourslong and emotional hearing Monday, granted custody of Pollina's daughters to their biological fathers. Both girls had been living with Pollina's grandparents since their mother's arrest.

Tantone, who heard testimony from both fathers and a CPS case worker who advocated for the girls to be reunited with their dads, imposed strict oversight, including two unannounced CPS visits weekly to each home, counseling for all the girls and their fathers, as well as two weekly dinner visits and 10-hour visits on Saturday for all three girls to spend time with each other.

"These children have had their lives uprooted enough," Tantone said. "So if we can give them that one oasis of normalcy, that's what we're going to do."

Gino Cali, an ex-fiance of Pollina who lives in Oceanside, sobbed after the judge announced he would be reunited with his daughter Gia Cali, 8. Michael Ichkhan, the Lynbrook father of the twins he had with with ex-wife Pollina — Delana and Milana, both 11 — was also emotional. Pollina's attorney Susan DeNatale, of Bayport, had said her client approved of the twins going to live with their father but opposed Gino Cali having custody of their daughter.

Monday evening, there was standing room only in a packed sanctuary at St. John the Evangelist Roman Catholic Church in Center Moriches, where several hundred people held candles, sang hymns and prayed in honor of Thomas. The 5 p.m. Candlelight Evening Prayer, which lasted an hour, drew mourners much younger than Thomas as well as those in their 80s. Many openly wept and wiped tears.

Visitation is scheduled from 2 to 4 p.m. and from 7 to 9:30 p.m. on Wednesday at Mangano Funeral Home in Deer Park. A mass is scheduled at 9:30 a.m. on Thursday at St. Elizabeth of Hungary Roman Catholic Church in Melville.

Mom of deceased 8-year-old at vigil: He 'just loved everybody'A community in mourning gathered in Center Moriches, pledging to fight child abuse and lighting candles in the winter twilight to honor Thomas Valva. Cops: Boy, 8, died after being kept overnight in freezing cold garageThe boy's internal body temperature, taken at the hospital where he died, was just 76 degrees, authorities said. Mother of 8-year-old boy 'heartbroken' over his 'cruel and tragic death'Justyna Zubko-Valva is grateful for the public's support following the alleged murder of her son Thomas Valva at her estranged husband's home in Center Moriches last week.