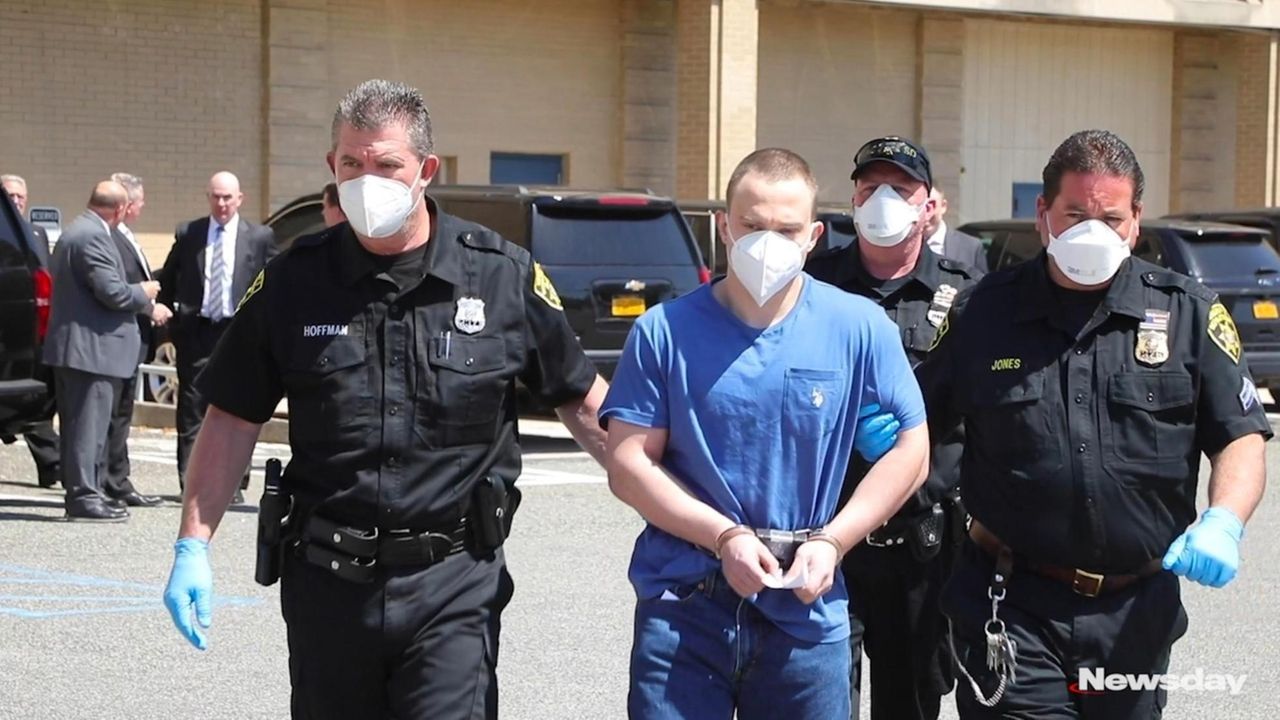 An NYPD police officer charged with the fatal shooting of his unarmed childhood friend last week in Farmingdale allegedly shot the man five times with his 9 mm service weapon, then fled and failed to call 911, a prosecutor said Thursday.

Rookie cop Errick Allen, 27, of North Massapequa, was charged Thursday with second-degree murder in the May 12 shooting death of Christopher Curro, 25, of West Babylon.

Nassau District Court Judge Anthony Paradiso ordered Allen, who pleaded not guilty, held without bail during his arraignment Thursday afternoon. Arraignments are being conducted virtually because of the coronavirus and Allen responded "yes, sir," when asked by the judge if he consented to the proceeding.

"The defendant proceeded to fire five bullets into Christopher Curro's body, including two into his head, one at an exceptionally close range and one into his neck," said Assistant Attorney General Josh Gradinger, who is prosecuting the case. "Despite the fact that he was a police officer, the defendant didn’t stay at the scene … he didn’t call 911."

Gradinger did not present a motive for the killing but said Allen apparently returned to the shooting scene about a half-hour later and admitted to officers he had shot his friend and made the following statements to police officers: “I know him. He is my friend Chris Curro. … I shot him once in the head."

Gradinger said Curro was "completely unarmed at the time of the killing" and in asking for Allen to be remanded told the judge: "The defendant shot an unarmed man at close range and he immediately fled the scene. This is essentially as serious as it gets, your honor."

Gradinger added: “This killing was committed with absolutely no legal justification.”

Allen's defense attorney Anthony LaPinta disputed that notion, saying his client's rationale for the shooting would be at the heart of his defense.

"I take great objection to the statement that there is absolutely no justification," said LaPinta, of Hauppauge. "This is a clear hallmark case of justification … what happened in that incident was a tragedy between friends who grew up together in the Farmingdale area."

LaPinta, who unsuccessfully sought $250,000 cash bail or $500,000 bond for his client, emphasized Allen had undergone rigorous vetting to become a police officer, had not fled the area since the shooting and has no prior criminal record.

He said Allen's family was "willing to post every single penny of their assets" for his bail and legal fees. "He has the support of every single family member," LaPinta said.

LaPinta said Allen graduated from Farmingdale High School in 2012 and earned a bachelor's degree from a local college. He is the grandson of a retired NYPD officer, LaPinta said.

Attorney General Letitia James' office is serving as a special prosecutor in the case pursuant to a 2015 executive order granting the office prosecutorial powers in the deaths of unarmed civilians at the hands of law enforcement.

"We trust our police officers to protect the safety of New Yorkers, but instead, this individual allegedly betrayed that duty to end another man’s life," James said in a statement.

Allen shot Curro in the head on the evening of May 12, police have said. Nassau police officers responded to a 911 call around 8:05 p.m. for a shooting on Langdon Road and found Curro's body, police said. Curro, who worked as a pizza deliveryman, and Allen had both attended and graduated from Farmingdale High School.

Nassau Police Commissioner Patrick Ryder described the encounter between the men as beginning with a conversation and escalating to a physical struggle that ended with gunfire in a brief news briefing a day after the killing. But the department has declined to provide many details of incident or explain why it took more than a week for Allen to be arrested.

Allen, who was assigned to the 109th precinct in Queens, was hired by the NYPD in 2019, officials said. He was suspended without pay for 30 days after the shooting, NYPD Chief of Department Terence Monahan said previously.

Aunt: Family of man shot by off-duty NYPD cop is 'destroyed'The victim's aunt said Christopher Curro had grown up with the NYPD cop police say shot him. No charges have been filed in the case.