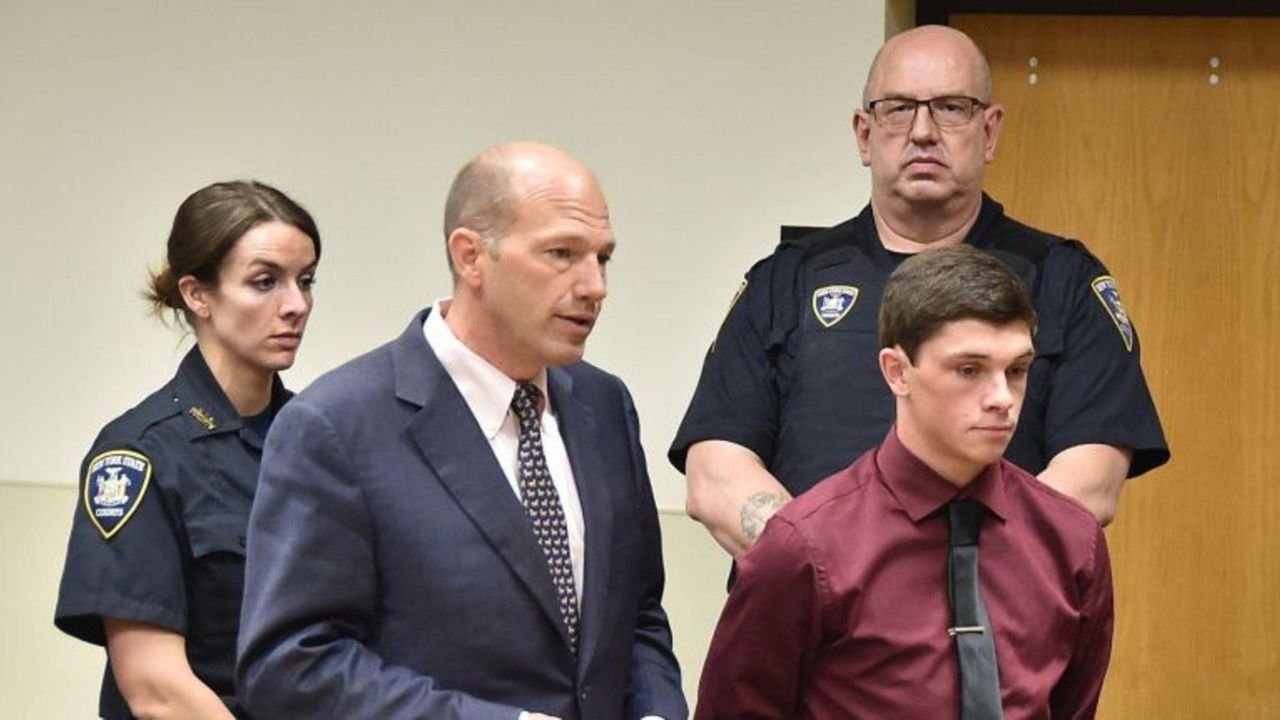 David O'Brien heard family members of a friend he killed while driving on drugs pour out their anguish and anger at him in a Riverhead courtroom on Friday. O'Brien was to be sentenced Friday, but Suffolk County Court Judge Anthony Senft granted a defense request to wait a week after hearing from the victim's family. Credit: John Roca

A Lindenhurst man listened to family members of a friend he killed while driving on drugs pour out their anguish and anger at him Friday in a Riverhead courtroom.

David O'Brien, 19, pleaded guilty in May to aggravated vehicular homicide and other charges related to an Oct. 9, 2017, crash that killed Joseph Galdorisi, 16, and Maggie Miller, 24. They were passengers in O'Brien's car when he lost control of his Ford Mustang on North Wellwood Avenue in Lindenhurst and hit a tree when he was driving while high on marijuana and Xanax.

O'Brien was to be sentenced Friday, but Suffolk County Court Judge Anthony Senft granted a defense request to wait a week after hearing from Galdorisi's family members. At the time of the plea, Senft said he would sentence O'Brien to no more than 4 to 12 years in prison. The maximum he had faced was 8⅓ to 25 years.

Anthony Galdrorisi Jr., Joseph's father, made clear his disgust for O'Brien, calling him "low life, white trash" and a "punk" in the courtroom. He said O'Brien never showed any remorse for what he did.

Because of the hostility between the family and O'Brien, there were three times the usual number of court officers in the courtroom. They kept the families separate in the courthouse and in the parking lot.

The victim's mother, Christine Galdorisi, held a photo of her son and described learning of his death. O'Brien's face turned red as he listened, and his attorney, George Duncan, put his hand on his shoulder.

"Our new normal is daily visits to the cemetery," she said. "Every day's a struggle without him."

Joseph was killed so young, she said, that he never got his braces off. She wears a pendant that includes her son's fingerprint.

A cousin, Nicole Torres, told Senft that the Galdorisis' close-knit family has both held them up and amplified Joseph's loss.

"We're missing a piece of our family," she said, and everyone is reminded of that at every birthday, every Sunday dinner. She also criticized O'Brien for drug-related social media posts after the crash.

"There's nothing that shows anything was learned," Torres said.

"This whole series of events has been devastating to him," Duncan said.

Senft said when he imposes sentence, he will consider all that the Galdorisi family had to say. He said the law permits an adjournment after victim impact statements so he can take the time to consider them in the context of the case.

Miller's family was not present in court.