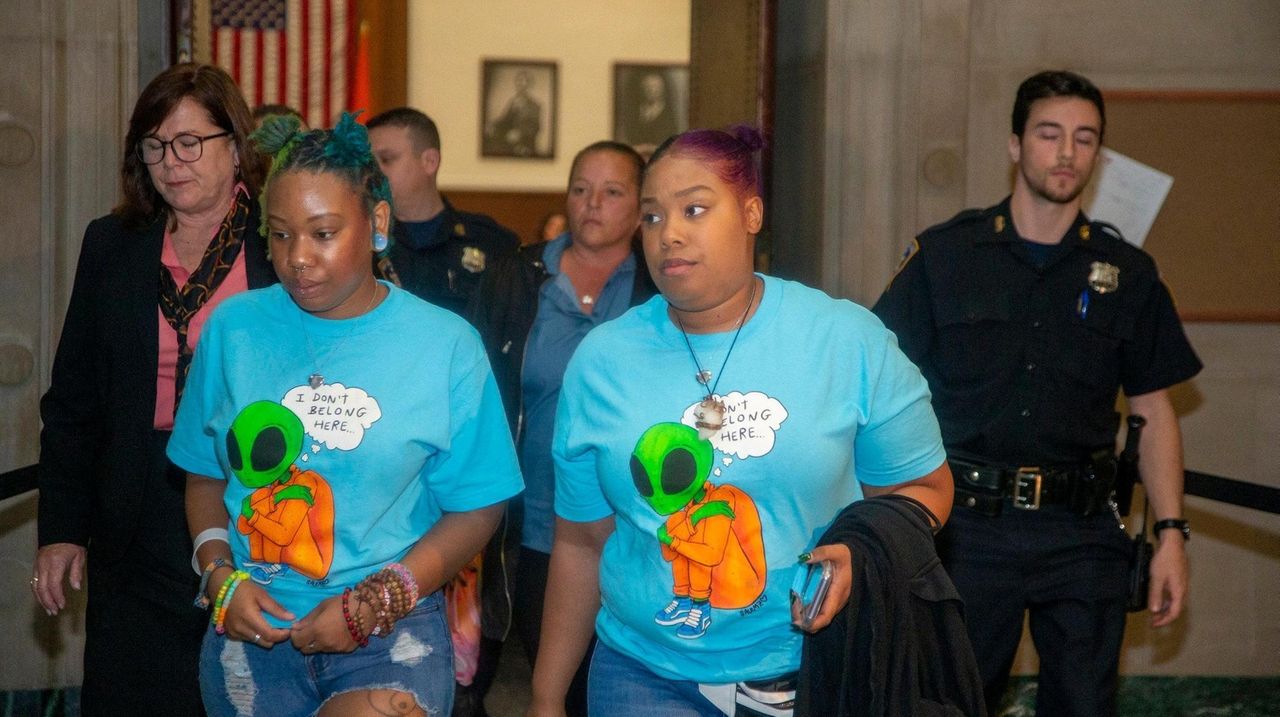 The Lido Beach teenager charged in the fatal stabbing of an Oceanside High School senior pleaded not guilty to second-degree murder and other charges Thursday while dozens of relatives of the teen killed in the melee watched.

An attorney for Tyler Flach, 19, said the Nassau Community College student insists he did not kill Khaseen Morris, 16, during a Sept. 16 encounter in the parking lot of an Oceanside strip mall.

Flach was arraigned in a crowded Nassau County courtroom before Justice Howard Sturim on an indictment charging him with second-degree murder, first-degree gang assault, third-degree assault and criminal possession of a weapon.

Flach's attorney said his client is innocent. “The bottom line is that Tyler Flach strongly maintains his innocence,” defense lawyer Edward Sapone said after Thursday’s arraignment in Mineola. “Tyler Flach did not commit a crime that day.”

Morris’ sisters wore T-shirts featuring aliens in orange jumpsuits, copies of the shirt their brother was wearing when he was killed. They said it was difficult for their family to see Flach in court Thursday. Morris would have turned 17 on Oct. 24.

Khaseen Morris, the youngest of four siblings, began attending Oceanside High weeks before his death after his family moved to the town from Freeport over the summer. His sisters said they want him to be remembered as a happy-go-lucky artist, musician, writer and skateboarder.

“That groovy cool kid, that is who he needs to be remembered as,” said sister Keyanna Morris, 30.

Flach has been held without bail since he was arrested on Sept. 18. Sapone did not ask acting state Supreme Court Justice Howard Sturim to set bail Thursday. Flach will return to court Nov. 18. He faces 25 years in prison if convicted of the top charge.

“Khaseen Morris was a bright and gregarious young man whose life was stolen in this horrific and senseless act of violence,” Nassau County District Attorney Madeline Singas said. “Our condolences are with Khaseen’s family, friends and the entire community that loved this young man.”

Sapone also expressed sympathy for Morris’ family, saying: “There is a family grieving, and our hearts go out to that grieving family."

Seven Long Beach teens were also indicted on second-degree gang assault and misdemeanor assault charges as a result of their alleged participation in the Oceanside brawl. All seven have pleaded not guilty to the charges.

Authorities have said Morris went to the strip mall knowing that the ex-boyfriend of a girl he was friendly with wanted to confront him. Police have alleged Flach stabbed Morris after he and his friends charged at Morris and his friends. A 17-year-old  boy also suffered a broken arm and head injury in the fight, according to authorities.

Prosecutors gave Sapone a hard drive containing cellphone videos of the brawl during Flach’s arraignment, and the attorney said the defense team would analyze the videos.

“The videos capture a snapshot of what occurred that day,” Sapone said. “It does not capture what happened before or the aftermath. ... There is another side to the story.”

“What’s in the dark will come to light,” Keyanna Morris said. “The truth will always overstep nonsense.”

Birthday party a bitterweet reminder of teen's deathFamily and others who love Khaseen Morris gathered at his favorite Italian restaurant to celebrate his life, even as they continue to struggle with his untimely death. Seventh Long Beach teen indicted on felony gang assault pleads not guiltyHaakim Mechan was arraigned on an indictment after the Sept. 16 stabbing death of Khaseen Morris. 5 teens plead not guilty to assault in fatal Oceanside attack"This is the beginning of a long journey," said Keyanna Morris, one of the sisters of 16-year-old victim Khaseen Morris.