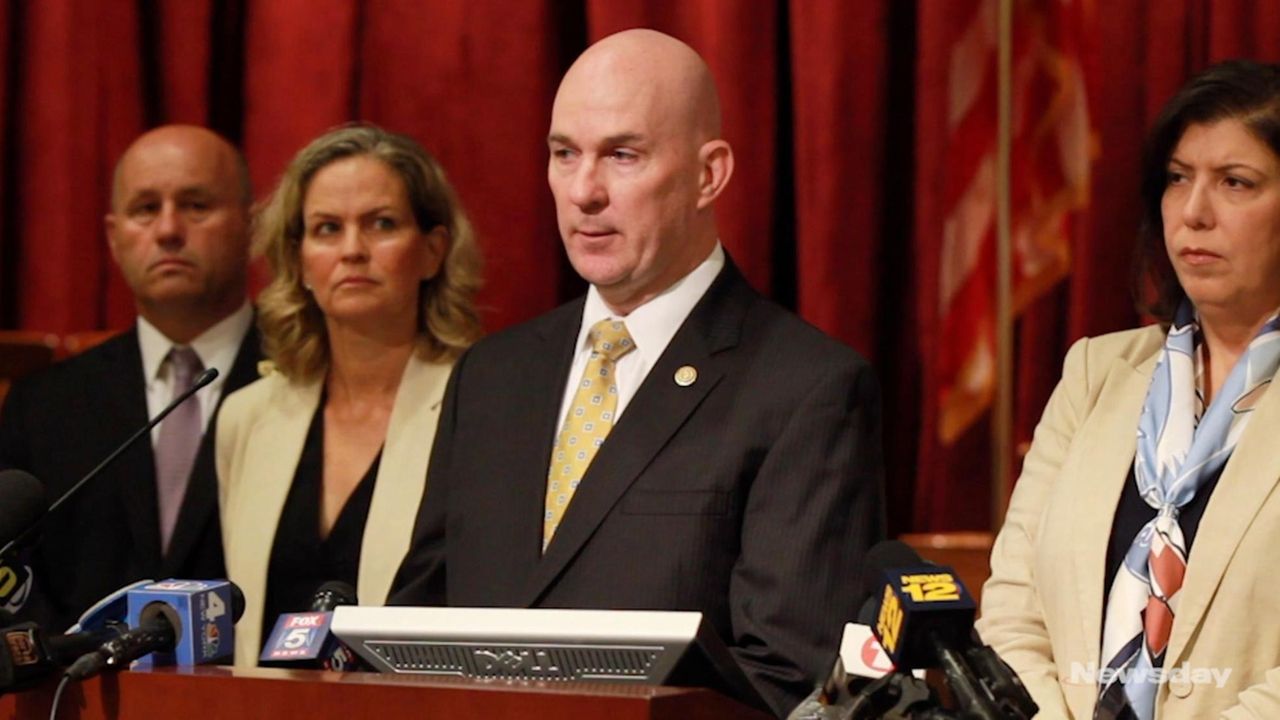 This story was reported by John Asbury, Craig Schneider and Rachel Uda. It was written by Schneider.

Seven Long Beach teens were arraigned Saturday morning in connection with the stabbing death of an Oceanside High School student.

Five of them — Haakim Mechan, 19; Marquis Stephens Jr., 18; Javonte Neals, 18; Taj Woodruff, 17; and Sean Merritt, 17 — were each charged with second-degree gang assault connected to the Sept. 16 stabbing of Khaseen Morris, 16, in an after-school fight at an Oceanside strip mall on Brower Avenue. A 17-year-old male was also injured in the fight.

Two 16-year-old suspects were also arrested and charged Friday with gang assault, but they were not named by police because they are minors. They were arraigned Saturday and are due back in youth court, according to the Nassau County district attorney’s office.

Nassau County District Attorney Madeline Singas said it had not been determined whether they would be tried as adults.

The five suspects who were identified all entered not guilty pleas through their attorneys in First District Court in Hempstead. They were ordered held on $25,000 bond or $12,500 cash.

“They were all active participants in the attack, physically hitting and throwing him to the ground,” Nassau County Homicide Detective Lt. Stephen Fitzpatrick said at a news conference Saturday morning. “Each one of them had an active role. They came with the intention to seriously hurt him. Khaseen got killed as a result.”

The arrests came a day after Newsday reported that Tyler Flach, 18, of Lido Beach, had been indicted on a second-degree murder charge and a weapon offense in the death of Morris.

Police have alleged Flach was among a group of young men who charged at Morris and his group of friends and that a melee ensued, in which Flach plunged a knife into Morris and pierced his heart.

Flach, who maintains his innocence, was being held without bail following his arrest last week.

Jared Rosenblatt, a Nassau County assistant district attorney, said in court Saturday that Stephens was “intimately involved” in the attack and “body slammed” the second victim to the ground, breaking his arm. The 17-year-old also suffered swelling in his head but survived, police said.

Rosenblatt also alleged that Mechan kicked the 17-year-old “square in the head,” knocking him unconscious. He described Mechan’s conduct as “significantly different” from the others and asked Judge Scott H. Siller that he be held on $40,000 bond.

Stephens’ attorney sought to downplay his client’s role in the fight.

“He had nothing to do with the stabbing and death of Mr. Morris,” Will Kephart said outside court, noting his client was an athlete going to college. He said it would be shown that the attack was “nothing more” than a fistfight and “unfortunately another individual took it to another level.”

Mechan is represented by a public defender, who was not available for comment.

Attorneys for the other defendants also tried to shift blame away from their clients.

Javonte Neals’ attorney, Lawrence Carra, told Siller that Neals had no prior criminal record and was going to Nassau Community College. Neals voluntarily surrendered to police and his attorney said he was not involved in the stabbing or the assault on the 17-year-old victim.

“He was present and participated, but his participation was limited,” Carra said.

Merritt was also involved in the fight, but not the stabbing death, his attorney Dennis Lemke said. He said two groups of students met for a fight and questioned why Oceanside students weren’t charged as well.

“Fights happen all the time. The problem is when someone brings a knife,” Lemke said. “This was a tragic example and decisions were made. It’s a tragedy a young man lost his life. My client didn’t have anything at all to do with his death.”

Woodruff’s attorney, Donald Rollock, said his client was not responsible for Morris’ death and that Flach “had a different intent than the others” charged Saturday.

“He’s a good kid and the bottom line is, once all these facts are straightened out, it’s going to be clear that his involvement in this situation was very minor,” Rollock said of Woodruff. “And I don’t think his involvement is what they’re portraying.”

Rollock also said the district attorney’s office should “look into the other male combatants who were fighting on the other side.”

“There was a mutual fight going on and they were just as involved,” he said. “I’m not sure how you can pick that one side is wrong and the other side is right.”

Attorney Scott Gross, who represents one of the unnamed minors, said, “My client was not charged with murdering or assisting in the murder of the victim. For that, he played no role. What we are left with is a 16-year-old high school student with an allegation that he was involved in a fistfight and that is what we intend to defend.”

The funeral for Morris, who would have turned 17 next month, was held Saturday in Oceanside.

As his family made final preparations Friday for his service, his sister, Keyanna Morris, 30, took comfort in learning that more suspects were in custody.

“People cannot do this to someone so good and think there’s not going to be any kind of justice,” she said.

Morris’ family, who wore tie-dye T-shirts over their funeral clothes in his memory Saturday, crowded one side of the courtroom during the arraignment. Family members of the suspects sat on the other side of the aisle. All declined to comment.

Authorities have said Morris succumbed to a single stab wound to his chest hours after the brawl took place about 3:45 p.m. at the strip mall, which is near his school.

Fitzpatrick said Saturday that the attack began over jealousy because Morris was seen with the ex-girlfriend of one of the juvenile suspects.

Nassau police previously have said the violence broke out after Morris went to the strip mall knowing the ex-boyfriend of a girl he was friendly with wanted to confront him.

The victim’s family has said Morris had texted the ex-boyfriend to say he wasn’t dating the girl but had walked her home from a party.

Last week, police issued a public warning to teens who were involved or at the scene, telling them to come forward with their versions of events.

Singas said Saturday that authorities are still seeking video of the attack and asking additional witnesses to come forward.

“It’s imperative we get that information for Khaseen’s family and the Oceanside community,” Singas said.

Singas said the case will go before a grand jury for a formal indictment and additional charges are possible.

Police said the gang assault charge is based on three or more participants involved in the attack with intent to cause serious injury.

Flach and the seven arrested appeared together in a YouTube rap video but were not a recognized gang by Nassau police, Nassau County Police Commissioner Patrick Ryder said.

Nassau County Executive Laura Curran said homicide detectives acted vigorously for the past two weeks to make the arrests. “It’s been 12 days since Khaseen was murdered and it’s been a very difficult time for his family, the Oceanside community and the entire county,” Curran said.

At least three of the suspects arrested Friday are current Long Beach High School students, and at least two are graduates of the school, multiple sources close to the case said.

Morris was the youngest of four children and had just started school in Oceanside weeks earlier after his family moved there from Freeport over the summer.

The victim’s family previously called Flach’s indictment the “first step” toward peace and vowed to be in court “every step of the way” for criminal case proceedings.

But Flach’s attorney, Edward Sapone, has said evidence will show his client didn’t commit a crime and the defense “will expose what really happened that day” at “the appropriate time.”