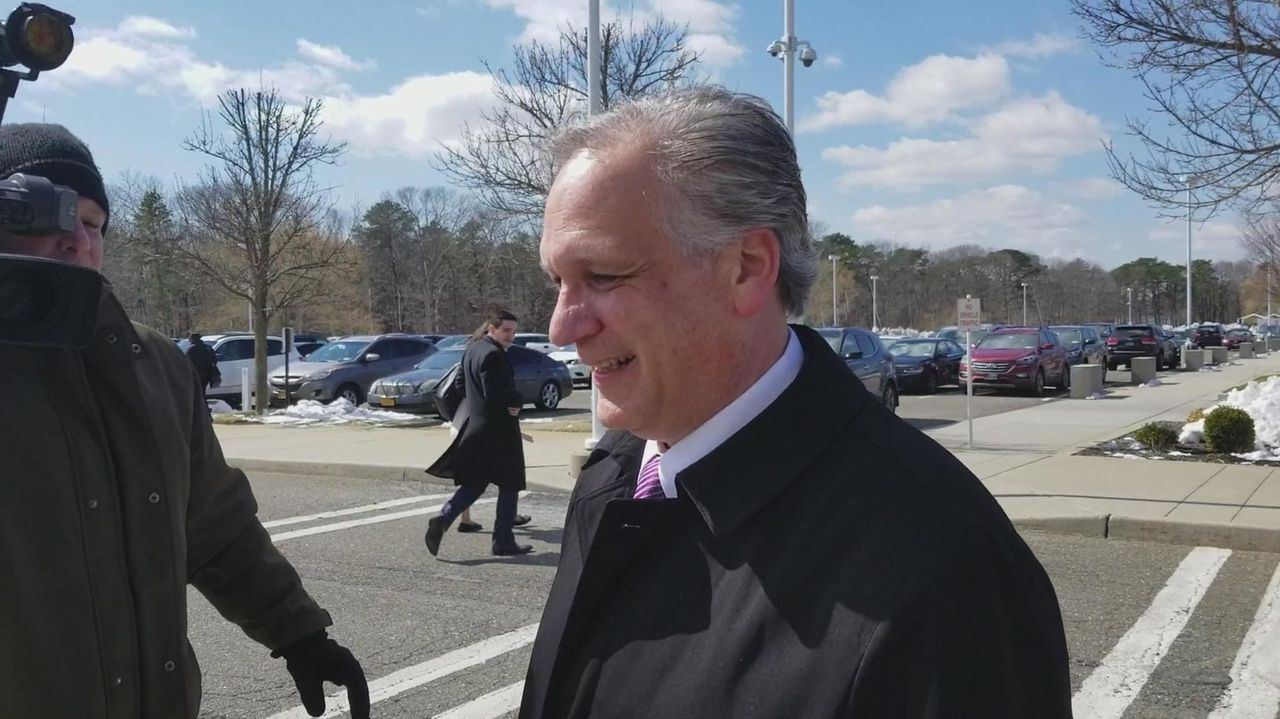 This story was reported by Nicole Fuller, Robert E. Kessler, Bridget Murphy, and Emily Ngo. It was written by Ngo.

Opening statements Wednesday in the corruption trial of former Nassau County Executive Edward Mangano saw the prosecution alleging Mangano “sold himself” to restaurateur Harendra Singh to maintain his lifestyle and defense attorneys attacking Singh’s credibility while shifting blame onto others.

“This is a case about corruption and greed at the highest levels of county and town government,” Assistant U.S. Attorney Lara Treinis Gatz said in the Central Islip courtroom.

Mangano felt he was entitled to a life of luxury despite earning $114,000 less as county executive than he did as a private attorney and county legislator, Treinis Gatz said.

Mangano, his wife, Linda, and former Oyster Bay Town Supervisor John Venditto are accused of partaking in a scheme involving Singh, who has pleaded guilty to providing them with perks ranging from a $450,000 no-show job for Linda Mangano to office and massage chairs totaling nearly $7,000 for Edward Mangano in exchange for county contracts and town-linked loans boosting his restaurant empire. Singh also allegedly bought a $7,300 Panerai Luminor watch that the Manganos presented to one of their sons for his 21st birthday “claiming it was from them,” Treinis Gatz said.

Who’s who in the trial

The Manganos and Venditto have pleaded not guilty.

Singh is expected to take the stand beginning Thursday as the prosecution’s star witness.

Singh was once Mangano’s “closest friend” but kept hidden “a dark side,” Keating said.

He betrayed Mangano to try to save himself from more jail time after the government caught up to “massive amounts of financial fraud,” Keating said.

Keating of Garden City also sought to make the case that Singh benefitted more from the Town of Oyster Bay than Nassau County, which his client headed until last December.

Singh only won part of a 2012 bread-and-rolls contract at the county jail at the insistence of now-deceased Nassau County Legislature Presiding Officer Peter Schmitt, who wanted a local company to get the contract over an upstate business, Keating said.

Treinis Gatz, the prosecutor, said that then-Chief Deputy County Executive Rob Walker, indicted last month in a separate corruption scheme, “personally showed up” to the county’s purchasing department and “split the contract” between Singh’s bakery and a competitor that had the lower bid. As a result, the competitor pulled out and Singh got the full contract, she said.

Mangano and Singh began their “real, deep friendship” when Mangano was still a young attorney with a Bethpage printing business and Singh owned a Bethpage lunch spot called “No Bananas,” Keating said.

The town was “all in on Harendra Singh” after the restaurateur made capital improvements ahead of schedule by pouring millions into the Woodlands property where he had taken over a concessions agreement, Keating said. The town agreed to two contract extensions years ahead of schedule, he said.

Mei, who has pleaded guilty to receiving bribes from a town concessionaire whose dealings match those of Singh, will, according to Treinis Gatz, explain to jurors how Venditto’s allegedly corrupt acts were “the Town of Oyster Bay way.”

Agnifilo of Manhattan contrasted the bribes that Mei pleaded guilty to accepting from Singh — multiple overseas vacations to South Korea and India and $1,000 monthly lease payments for a convertible BMW — with Venditto’s alleged benefits, which included “discounted” limo rides and the use of a conference room in the basement of one of Singh’s restaurants.

“John Venditto got nothing of any consequence, any significance,” Agnifilo said.

Agnifilo said Venditto wouldn’t risk his long career of public service with the town stretching back to the 1980s.

H.R. Singletons restaurant in Bethpage was the flagship of what once was Singh’s restaurant empire.

The latest in the Mangano case

Instead, Venditto was willing to try to work out a “legal way” — evidenced by the seeking of lawyers’ opinions — for the town to guarantee Singh’s loans in order for him to make upgrades to the beach and golf course where he was a concessionaire, Agnifilo said.

Treinis Gatz in her statement called Venditto “the general” who gave Genova and Mei “marching orders to make the loans happen.”

Edward Mangano, 55, of Bethpage, and Venditto, 68, of North Massapequa, are accused of taking bribes in what is also known as an illegal “stream of benefits” scheme while they were in office, prosecutors say.

In return, the former officials were involved in orchestrating a complex method to get Singh, 59, of Syosset, more than $20 million in indirect government loan guarantees from the Town of Oyster Bay and contracts from Nassau County, prosecutors say.

Linda Mangano, 54, of Bethpage, is charged with conspiracy, obstruction of justice and making false statements to federal law enforcement officials.

Linda Mangano’s attorney, John Carman, defended her as intimidated by the FBI agents who came to her Bethpage home.

She still has “no idea what they claim the false statements are,” said Carman of Garden City.

He said his client at one point sat at the kitchen table of her family’s home with Edward Mangano and Harendra Singh and recounted telling law enforcement officials about doing menus, logos and other work for Singh’s business.

Venditto and the politics of LI corruption

Carman said that conversation — a “natural human response” to the FBI’s questions — was “the fruit of the conspiracy to obstruct justice” accusation against his client.

He also said it wasn’t illegal for Linda Mangano to have “low-show job” from a family friend and added that he didn’t believe Singh would testify that the job was a way to get in Edward Mangano’s good graces.

In Treinis Gatz’s telling of the meeting to discuss their stories, the Manganos contacted Singh after they were first interviewed by the FBI in January 2015.

“Come over. It’s urgent,” the prosecutor said they told him. “They needed to coordinate their stories.”

Edward and Linda Mangano and Venditto “pressured” Singh not to cooperate with authorities in order “to conceal their crimes,” Treinis Gatz said.

Agnifilo, Venditto’s attorney, said he may call New York City Mayor Bill de Blasio to testify depending on what Singh says. Singh had pleaded guilty to attempting to bribe de Blasio, who was never charged, through campaign contributions.

Singh sought to find a law firm not employed by the town that would write a letter to financiers to help with his loan guarantees, Agnifilo said. He turned to the Harris Beach law firm, whose partners include William Garry and his brother Thomas Garry, Agnifilo said.

Thomas Garry is vice chairman of the Nassau Democratic Party and its chief strategist.

“The way he gets to de Blasio is through Tom Garry,” Agnifilo said of Singh.

Also Wednesday, U.S. District Judge Joan Azrack dismissed a female juror for a reason or reasons that were not disclosed. The juror was replaced by a woman from the pool of alternates, keeping the panel at six women and six men.

Sign up for our Mangano trial newsletterGet our insider's look and analysis of the key moments in the re-trial of Ed and Linda Mangano. Singh to play major role in Mangano trialHarendra Singh once lived large as a well-connected restaurant magnate, hosting Long Island's political elite at his eateries and charitable galas. Jury selected for Mangano-Venditto trial"We'll have our story out. ... We'll have our side out," former Nassau County Executive Edward Mangano told reporters as he entered the Central Islip courthouse. "I always feel confident," he said. How crises plagued Mangano's two termsEdward Mangano, the former Nassau County executive, entered office with high ideals but was plagued by crisis after crisis — some unexpected and others self-inflicted. His trial begins Monday in a federal courtroom in Central Islip.