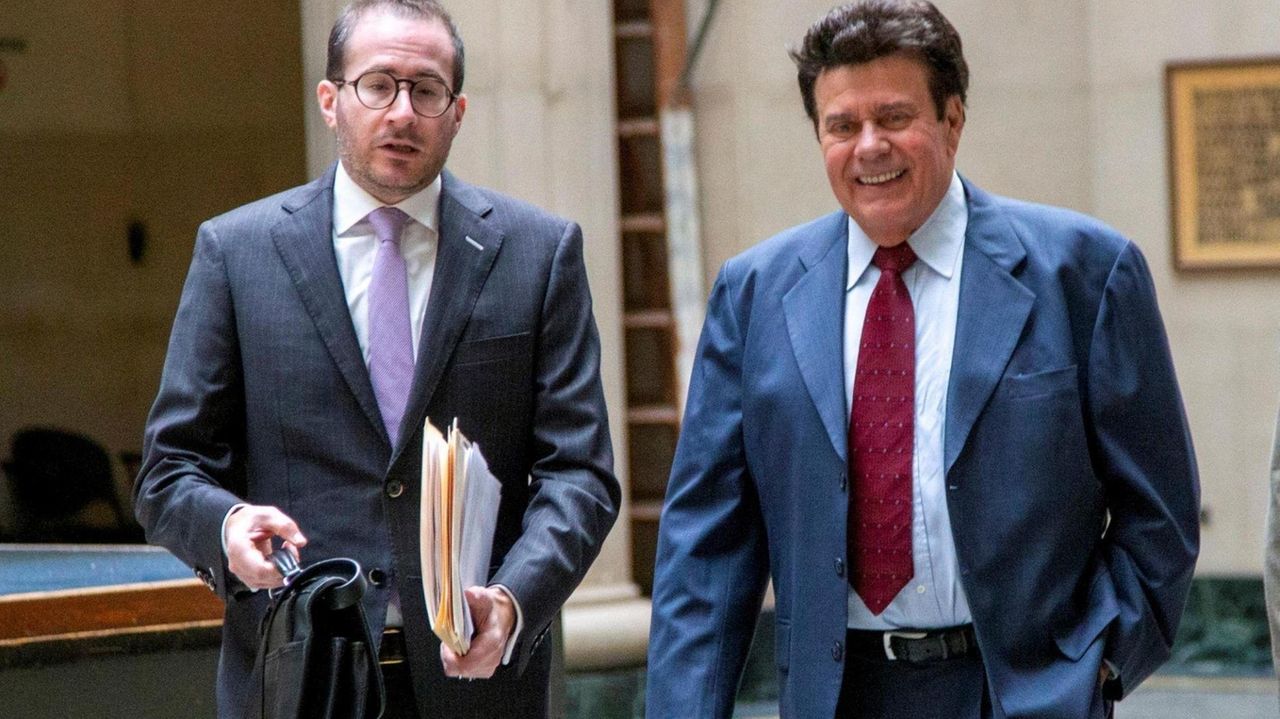 Richard Porcelli, 72, of Ronkonkoma, pleaded guilty in Nassau County Court in a deal in which he'll serve 25 hours of community service as part of a 1-year conditional discharge. Credit: Howard Schnapp

Richard Porcelli, 72, of Ronkonkoma, admitted to a misdemeanor conspiracy charge in Nassau County Court under a deal in which he'll serve 25 hours of community service during a one-year conditional discharge.

State Supreme Court Justice Charles Wood sentenced Porcelli under terms he approved that the prosecution and defense had negotiated.

The sentence means the former North Massapequa Republican Club deputy executive leader will face no other punishment if he stays out of legal trouble and does the community service in the next year.

A June 2017 indictment charged Porcelli with two counts of official misconduct and one count of sixth-degree conspiracy, all misdemeanors.

The indictment was one of three that grew out of a wide-ranging investigation by Nassau District Attorney Madeline Singas’ office that included extensive use of wiretaps and took aim at what she said was “pervasive corruption” in Oyster Bay’s government.

Prosecutors had alleged Porcelli was part of a scheme to illegally hire an unnamed Oyster Bay Parks Department employee at an inflated salary and later fire him.

Porcelli admitted while pleading guilty that he conspired with public servants to chose other town employees to fire to divert attention from the Parks employee's firing, and ordered another Oyster Bay official to carry out the dismissal of the Parks worker and others.

The district attorney’s office has claimed that while Porcelli wasn’t a town employee, he was Venditto’s “right-hand” man and Oyster Bay employees took direction from him because he had the power of the supervisor behind him.

Porcelli had been facing up to a year behind bars if found guilty of the top count against him.

Venditto pleaded guilty in July to two corruption charges in a deal that left him a convicted felon and stripped him of his law license but included no jail time or probation.

Venditto admitted as part of his plea bargain that he participated in the same scheme as Porcelli, saying that while Oyster Bay was in a fiscal crisis he authorized the hiring of a part-time Parks Department worker.

The former politician said he did so at the request of late Oyster Bay Planning and Development Commissioner Frederick Ippolito and for the benefit of Ippolito — who was in a relationship with the Parks employee’s mother.

Porcelli’s attorney, Robert Caliendo, said after court Thursday that his client was pleased to resolve the matter with a plea to the lowest charge against him.

“He played a very minor role in what occurred. He wasn’t even an Oyster Bay Town employee at the time. At 72 years old, he’s eager to move on with his life.”

The Manhattan attorney added that his client no longer has a leadership title with the North Massapequa Republican Club.

Singas spokesman Brendan Brosh said in a statement that the conviction holds Porcelli "accountable for inappropriate actions he took at the direction of Oyster Bay officials."

The sentence, he added, "reflects age and significant health challenges."

Separately, Wood scheduled the trial of Frank Nocerino, 67, of Massapequa, a former Oyster Bay Parks Department commissioner accused in the same indictment, to start next week.

Court records show Nocerino, who previously pleaded not guilty to official misconduct, allegedly told investigators in December 2016 that the Parks worker drew a swastika on a sidewalk in a Farmingdale park about a year earlier.

The incident sparked a complaint that led to police involvement and the worker was fired, according to the alleged statement.

But the town rehired the same worker later at the request of Venditto, who also was behind the employee's initial hiring, Nocerino allegedly told investigators.

Venditto said the worker's mother was Ippolito's "girlfriend or soul mate," according to Nocerino's alleged statement.

Corruption on LI: 10 cases to knowOver the past few years, prosecutors have charged Long Island politicians and public officials with crimes ranging from tax evasion to bribery. Some of these cases resulted in convictions, while others are ongoing. Follow Newsday's latest coverage on the most prominent cases here. John Venditto pleads guilty to corruption chargesJohn Venditto's plea deal covers a felony charge of corrupt use of position or authority and a misdemeanor charge of official misconduct.

1:16
Newsday analysis: About 80% of LI students learning 'on-site'
Afraid for their elders. Tired of stereotypes. Young Asian Americans speak up.
2:28
Teen accidentally locks self in former bank vault
Lawmakers back 3% hike in Suffolk funding for SCCC
NYPD: 4th arrest made in anti-Semitic attack on LI man
Advocate: Wheatley graduate harassed over commencement speech
Didn’t find what you were looking for?