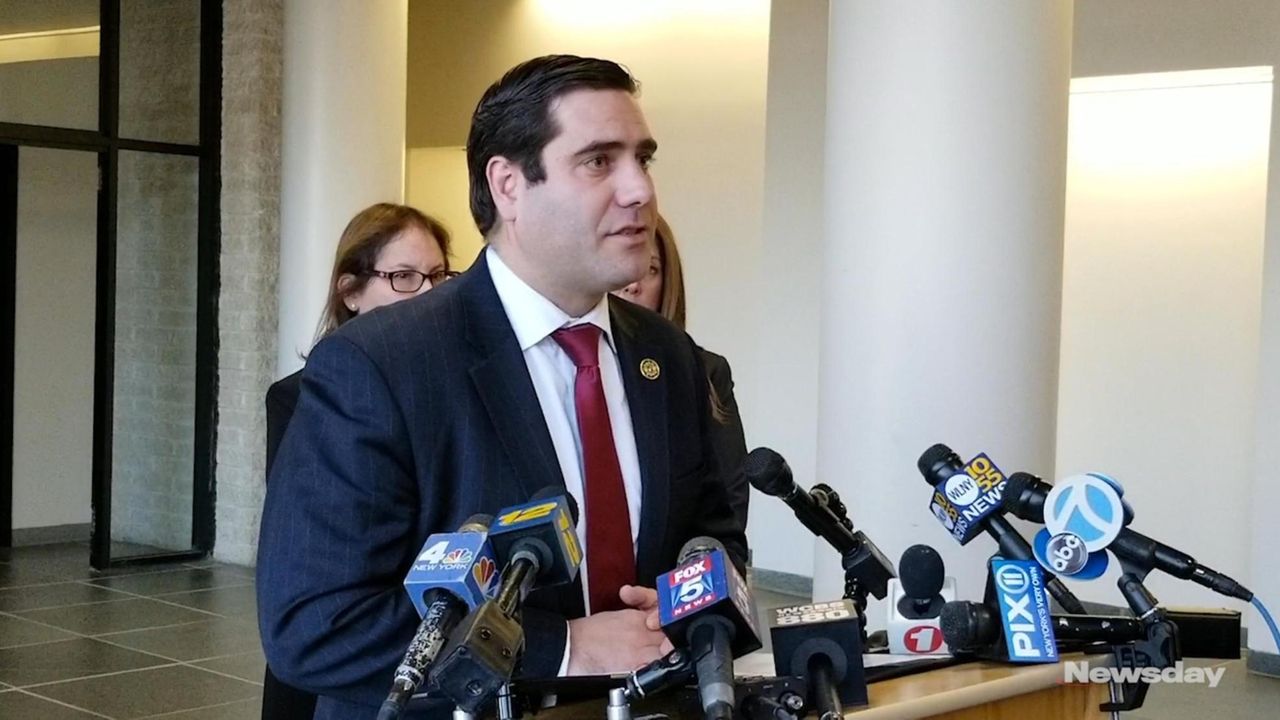 Suffolk District Attorney Timothy Sini held a news conference Thursday to discuss the case of Renee Burke, who is accused of trying to kill her estranged husband by poisoning him with antifreeze, according to court papers.  Credit: James Carbone

A Holbrook mother was charged Thursday with trying to kill her estranged husband by breaking into his house and putting antifreeze in his drinks, sometimes with the assistance of the couple's then 8-year-old daughter, Suffolk prosecutors said.

Renee Burke's attempts on Matthew Burke's life, prosecutors said, came in the midst of a divorce and child custody battle in which a Family Court judge gave him custody of the children, issued orders of protection for her not to harm the children and limited her visitation. At least three times last September, Assistant District Attorney Nicholas Santomartino said, Renee Burke broke into Matthew Burke's Holbrook home to poison his drinks. The last attempt was captured on video, he said.

Matthew Burke is "really happy" about the charges, said his attorney, Rick Stafford of Bohemia. "He feels he can sleep at night now."

On the evening of Sept. 6, Santomartino said, Matthew Burke poured himself a glass of wine and immediately spit it out. He at first thought the wine had gone bad and threw out the bottle, but later his children's baby-sitter told him that his son, 5, had told her, "Mommy came in and put something in Daddy's drink."

Two days later, Matthew Burke had a similar experience with a bottle of Pepsi, Santomartino said. A neighbor told police later that she'd seen a woman entering his home with a child that day, he said.

Police then advised  Burke to set up a surveillance camera in his kitchen, which he did, Stafford said.

A Sept. 12 video showed a woman and a girl in Matthew Burke's kitchen. It showed the woman pouring a pink liquid from two baby bottles into a bottle of wine, putting the wine back into the refrigerator and wiping down the counter, the bottle and the corkscrew.

She consented to a search of her cell phone, Santomartino said, and detectives found she had done internet searches related to antifreeze and rat poison. One search asked, "What car liquids could kill a human?" Santomartino said.

Under a search warrant of her home, a bottle of Prestone antifreeze, which is pink, was found in her kitchen, he said. Forensic testing of Matthew Burke's wine and Pepsi bottles showed evidence of ethyl glycol, the main ingredient in antifreeze.

Antifreeze, which has a sweet taste, can cause kidney failure, nausea, paralysis, blindness, brain damage, seizures and death within 24 hours of swallowing it.

He told Cohen: "Before you stands a mother who has fought hard for her children."

He said Matthew Burke had access to the couple's former home, apparently suggesting he might have planted the Prestone bottle in his client's kitchen.

Salinger said that on the day of the video, the daughter "invited my client to enter" Matthew Burke's home so they could look for an item he had failed to give her that she needed. As for the actions depicted in the video, Salinger said there is "no direct evidence that what my client might — might — have put in the drinks was antifreeze."

Salinger continued, "This is mostly all about her children, OK, and making sure she can continue to be a mother to those children."