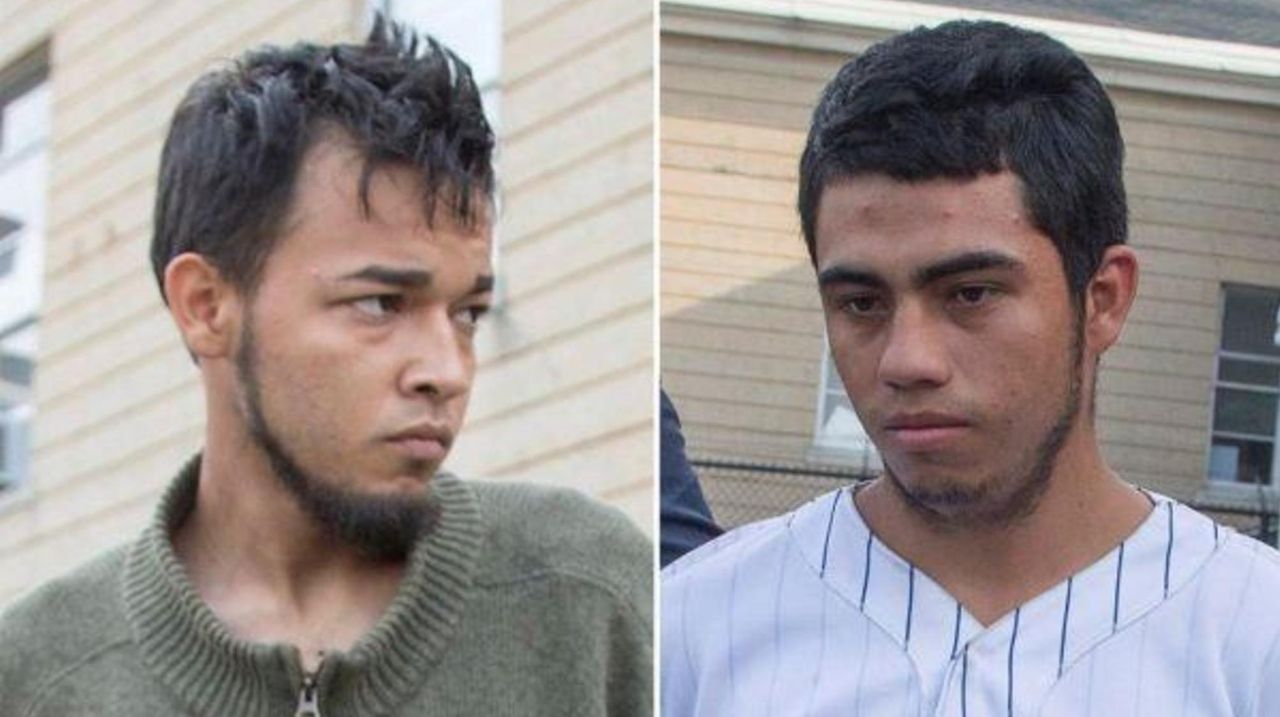 Two MS-13 gang members have been arrested in the March slaying of a man in Hempstead, the same week federal prosecutors announced the indictments of nine MS-13 gang members in the April slayings of four young men in a Central Islip park, Nassau County police said on Thursday, July 20, 2017. Credit: News 12 Long Island

Two MS-13 gang members have been arrested in the March slaying of a man in Hempstead, police said — apprehensions in the same week federal indictments named nine MS-13 gang members in the April killings of four men whose bodies were found in a Central Islip park.

Hector Lazo, 18, and Pedro Rivera, 23, each pleaded not guilty to second-degree murder and other charges Thursday at their arraignments in First District Court in Hempstead. Both told a judge they were homeless but were staying in Hempstead at the time of their arrests Tuesday, police said.

Lazo tried to run from police and jumped over two fences before several detectives finally handcuffed him, according to court papers. He was also charged with resisting arrest, authorities said.

Police said Rivera shot Nelson Rodriguez, 37, also of Hempstead, in the back and head on March 20 as he walked along Front Street, police said.

“Our investigation reveals that this was a gang-related incident,” Det. Lt. Stephen Fitzpatrick, commanding officer of the homicide squad, said Thursday. “Members of MS-13 shot him that particular evening.”

While a series of MS-13 killings in neighboring Suffolk have garnered national attention, Nassau’s gang problem has appeared more muted.

Nassau acting Police Commissioner Patrick Ryder said in an interview Thursday that the department has long taken an aggressive stance on gangs, resulting in a series of prosecutions. Between July 2016 and this month, the department’s Gang Investigation Squad has made 117 arrests, Ryder said.

“Our gang unit has done an excellent job identifying gang members, using real-time intelligence,” Ryder said. “We have a real good focus and understanding on who the players are. We have arrested some of the major players and indicted them locally and federally.”

Feds: 17 members of MS-13 indicted in multiple LI killings Federal prosecutors on Wednesday, July 19, 2017, announced charges against 17 members and associates of the MS-13 gang for multiple crimes, including the April 11 slayings of four young men in Central Islip and the January killing of a man and wounding of a woman in a Central Islip deli. Acting U.S. Attorney Bridget M. Rohde made the announcement of a superseding indictment at a news conference at the federal courthouse in Central Islip, along with FBI Assistant Director-in-Charge William F. Sweeney Jr., Suffolk County Police Commissioner Timothy Sini and representatives of the FBI's Long Island Gang Task Force. Credit: News 12 Long Island) (Photo Credit: Family handouts, SCPD

Ryder said one barometer of the relative quiet of gangs in Nassau is evidenced by the gunshot detection system, Shot Spotter, which in 2010 had 377 detections in the Roosevelt and Uniondale areas — gang hot spots. This year, there’s been 12.

U.S. Immigration and Customs Enforcement has placed immigration detainer holds on both Rivera and Lazo, said Nassau Assistant District Attorney Daryl Levy, who did not specify either man’s native country. Both are in the United States illegally, said Det. Lt. Richard LeBrun.

Rivera was also charged with misdemeanor fifth-degree criminal possession of stolen property for having a stolen computer, court papers showed.

Both Lazo and Rivera said in court through a Spanish-language translator that they were homeless. Court-appointed attorneys represented them. Lazo’s lawyer said his client worked as a restaurant cook and made about $10 an hour.

“I was trying to find a room to rent,” Lazo said, in court through a translator. Rivera’s attorney said his client had no prior criminal history. Rivera, also through a translator, told the judge he had been installing lawn sprinkler systems for about a $100 a day, working two to three days a week.

The MS-13 gang’s penchant for violence has been particularly felt in the Brentwood and Central Islip communities in Suffolk, with 11 killings connected to MS-13 in the last year.

Nine of the dozen or so MS-13 gang members accused of bludgeoning and hacking the four young men to death in April are now behind bars, federal officials said Wednesday.

Federal prosecutors also revealed the indictment of five other suspected members of MS-13 in connection with the January shooting inside a Central Islip deli that left a suspected gang rival dead and wounded a female clerk. Two of those suspects, who are brothers, were also indicted earlier this year in the September killing of two teenage Brentwood girls, officials said, and ordered the deli hit.