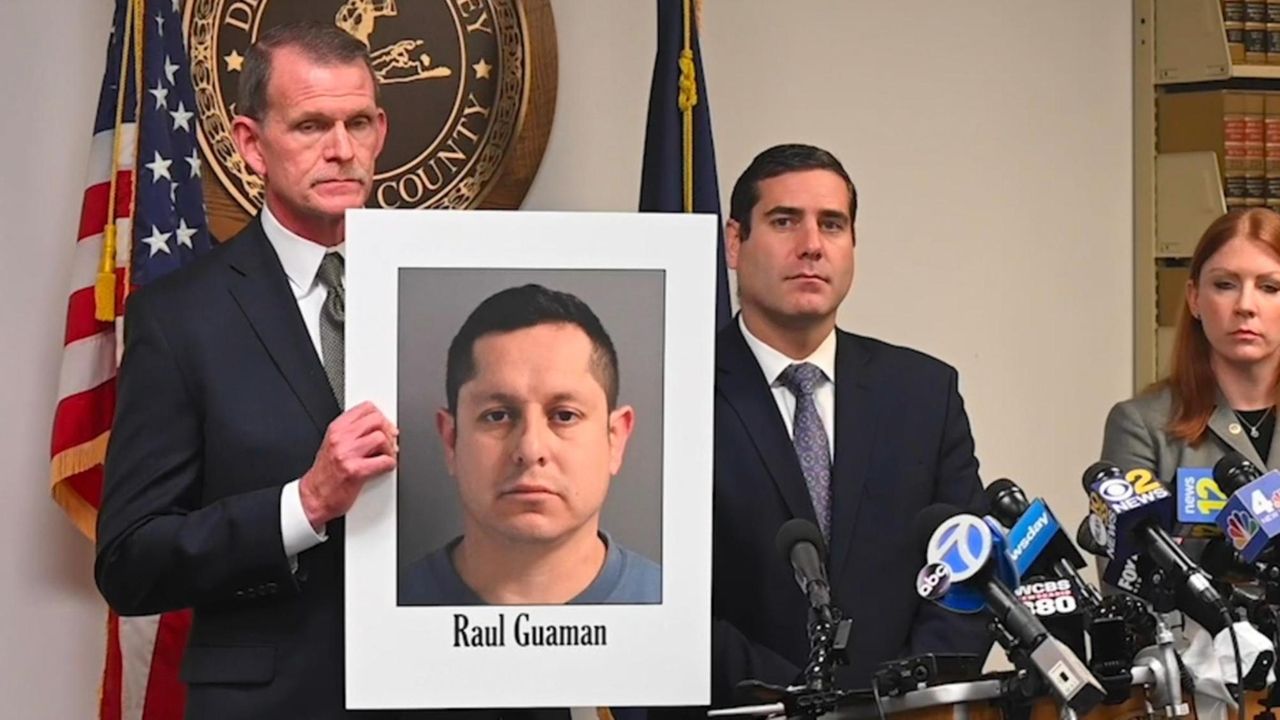 A Bay Shore man posed as a rideshare driver and sexually abused an unconscious passenger, according to Suffolk's top law-enforcement officials, who said the suspect may be a serial sexual predator who has abused other women. Newsday's Cecilia Dowd reports. Credit: James Carbone

A Bay Shore man posed as a ride share driver and sexually abused an unconscious passenger, according to Suffolk’s top law-enforcement officials, who said the suspect may be a serial sexual predator who has abused other women.

Raul Guaman, 43, also broke into a home earlier this month, where he stuck his hand down the pants of a female victim as she slept in her bedroom, Suffolk District Attorney Timothy Sini and Suffolk police Acting Commissioner Stuart Cameron said Tuesday after Guaman was arraigned in Riverhead. Investigators also found video Guaman had surreptitiously taken of the victim’s sister on four other occasions, they said.

Investigators recovered 32 cellphones and 16 women’s driver's licenses, from a search of Guaman’s home, raising fears that he had assaulted many other victims, Sini and Cameron said. Prosecutors said Guaman took the driver's licenses as "trophies."

"In my almost 37-year career, this is one of the most shocking cases I have ever seen, both due to the conduct of the defendant and also the potential scope of the crime," Cameron said Tuesday during a news conference in Riverhead following Guaman’s arraignment. "This definitely appears as if it could be a serial sexual abuse case."

Guaman was charged with first-degree criminal sexual act, burglary and other charges in an 11-count indictment announced on Tuesday. He faces up to 25 years in prison if convicted on the top count.

Guaman, a construction worker, pleaded not guilty to the charges before Suffolk Judge Chris Ann Kelley, who ordered the defendant to be held without bail in part because he is in the country illegally from Ecuador. Guaman is scheduled to return to court on Jan. 6.

Guaman’s attorney, Luigi Belcastro of Central Islip, said in court that his client has been in the United States for 23 years and is a father of a young daughter. Belcastro declined to comment.

A visibly enraged man confronted Guaman as he was being led out of court. "Hey, Raul, look at me," the man screamed, calling him an expletive.

Sini and Cameron urged anybody who believes they were assaulted by Guaman to call the Third Squad at 631-854-8352.

"This is very much an ongoing investigation, but we wanted to get information on this case out because we are attempting to identify additional victims," Sini said.

The officials said Guaman illegally entered a residence in Suffolk County on Nov. 14 and sexually abused a female victim, who awoke and called 911. Guaman was seen arriving and leaving the residence in his vehicle on video surveillance.

Guaman was stopped by Suffolk police in Bay Shore four days later for failing to stop at a stop sign. He was taken to the Third Precinct when officers could not determine his true identity.

He gave officers permission to search his cellphone, where investigators found video of Guaman engaging in sexual acts with numerous unconscious women. The cellphone also contained videos taken of a second victim living in the same residence he broke into on Nov. 14.

Police were able to identify one victim, who said she found herself stranded in a South Shore beach community in January 2019 after an encounter with Guaman.

Investigators have found evidence that Guaman had posed as a ride share driver to pick up female victims before sexually abusing them, Sini and Cameron said. They declined to discuss that evidence, saying it was part of an ongoing investigation.

Sini said it is important to continue the investigation and hold Guaman accountable.

"For those folks who may have been victimized by this defendant, it is critically important that you come forward," he said.