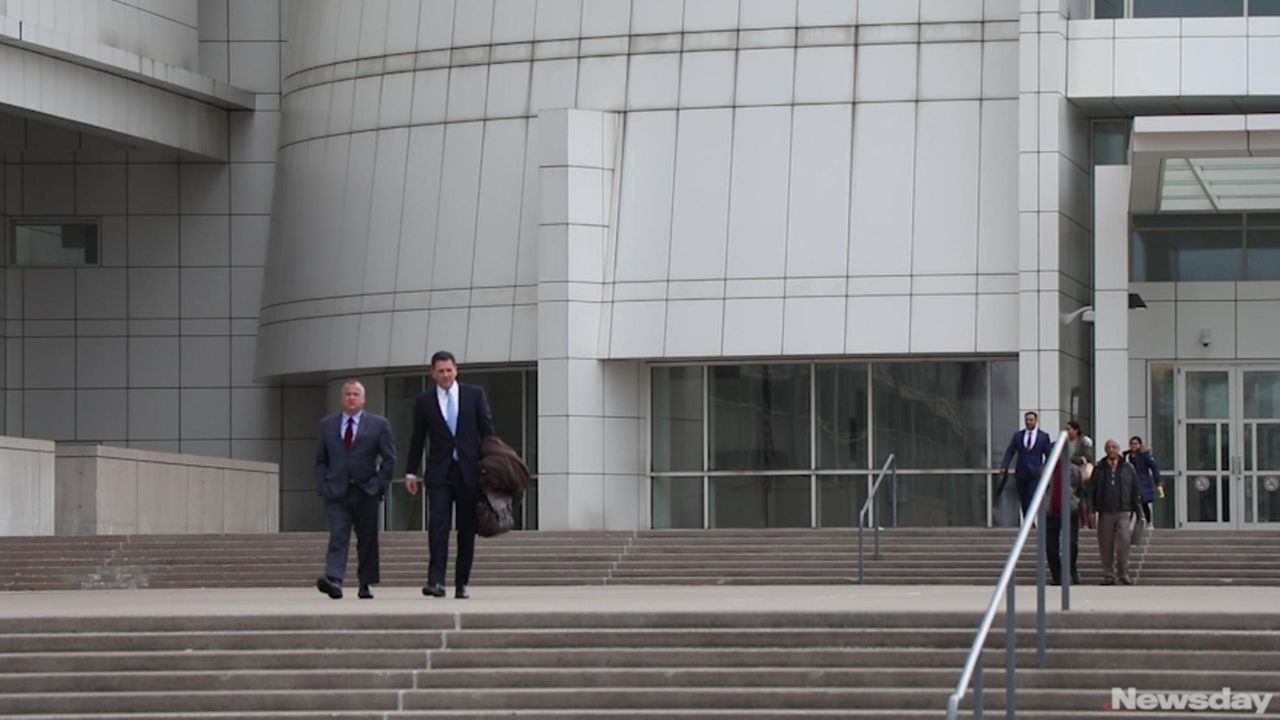 Walker, 43, a Republican and former state assemblyman from Hicksville, surrendered Thursday to federal officials at U.S. District Court in Central Islip before pleading not guilty to obstructing justice and lying to FBI agents.

His indictment comes more than two years after he confirmed while testifying in the corruption trial of former State Senate Majority Leader Dean Skelos that federal prosecutors were probing his role in county contracts that went to political campaign contributors.

The U.S. Attorney’s Office described Walker’s felony charges as the result of an ongoing federal investigation into whether Nassau public officials have taken money from county contractors and if those parties then tried to conceal their actions.

Walker ignored questions when arriving at the courthouse at 9 a.m. Thursday, and again after a noon arraignment at which U.S. Magistrate Judge Anne Shields released him on a $200,000 bond that his wife signed and backed up with their home.

Prosecutors said in a bail letter that the case against Walker centers around a $5,000 cash payment an unnamed contractor allegedly gave him in October 2014 after a University of Notre Dame football game in Indiana.

They said Walker accepted that person’s invitation to the game, and also took $5,000 from the contractor before returning to New York.

But when Walker learned last year of a federal investigation into potential corruption in Nassau County government, including circumstances surrounding the payment, he spoke to the contractor several times “in an attempt to convince the contractor to conceal the existence of the $5,000 payment from the grand jury,” according to authorities.

Further, prosecutors said, Walker urged the contractor to provide “a false explanation” to the grand jury about “both the character of the payment and the reasons for the payment.”

Walker finally gave back the $5,000 by arranging to meet the contractor in a Hicksville park, according to the letter. But prosecutors said the FBI surveilled their meeting in which Walker gave the contractor an envelope with $5,000 in it — an envelope that was then turned over to law enforcement officials.

Prosecutors have alleged Walker made a number of false statements when the FBI interviewed him later about the payment, including by denying he got any cash payments from the contractor.

Walker’s attorney, Brian Griffin, called him “a dedicated public servant” Thursday, adding that his client takes the charges seriously and maintains his innocence.

He said federal officials had taken more than two years to scrutinize every contract Walker handled and every campaign contributed he received, and found no allegations of bribery, official misconduct or improper contributions.

Griffin said further that the government’s allegation, “even as accepted at face value” was “not illegal conduct.”

The defense attorney added: “There is no tieback. There is no relation back to a contribution for any additional services for the county . . . This is a 20-plus year friend who Mr. Walker took a personal trip with. And the U.S. Supreme Court has been clear on this issue. It is not illegal to do that.”

In late 2015, Griffin had said after Walker testified at the Skelos trial that his client had done “nothing wrong,” had “nothing to hide” and would “continue to provide full and complete answers, documentation and information regarding any and all county contracting issues.”

Prosecutors declined to comment after court Thursday, but Richard Donoghue, U.S. Attorney for the Eastern District of New York, said in a press statement later that Walker “attempted to obstruct a grand jury investigation and then lied to the FBI” while serving as a public official.

“When he found out the FBI was hot on his trail, he tried to cover up his corrupt behavior, even going so far as to attempt to convince the contractor to lie to a grand jury,” William Sweeney Jr., the FBI’s assistant director-in-charge for the New York field office, said in the same statement.

Before his role as Mangano’s right-hand man, Walker served in New York’s Assembly after winning a 2005 special election.

Venditto, Mangano and Mangano’s wife, Linda, are scheduled for a federal trial March 12 after pleading not guilty in an alleged bribery scheme.

Edward Mangano and Venditto are accused of illegally helping restaurateur Harendra Singh get $20 million in indirect loan guarantees and government contracts in exchange for kickbacks and a lucrative $450,000 no-show job for Linda Mangano.

Walker’s charges are not directly related to the accusations against Mangano and Venditto.

Walker, who now works as a consultant, is the son of Rose Marie Walker — a Republican Nassau legislator and former Town of Oyster Bay councilwoman.

Walker had started as a summer intern to Mangano when he served in the county legislature, before running the Bethpage Republican’s 2009 county executive campaign where he upset Democratic incumbent Thomas Suozzi.

After the election, Walker became involved as Mangano’s chief deputy in all aspects of county government — from labor negotiations to Nassau Coliseum renovations to sewer system repairs after superstorm Sandy.

As Walker’s influence in county government grew, so did the money flowing into the Hicksville Republican Committee.

The committee, which Walker led, received $1.37 million in contributions since 2009 — more than any other hamlet, village or city GOP organization in Nassau, according to state Board of Election records. Many of the group’s contributors were county contractors.

In 2012, the committee spent $204,000 to purchase a luxury skybox at MetLife Stadium in New Jersey. The move drew a complaint from Nassau Democratic Party Chairman Jay Jacobs, who said the box was meant to directly support Mangano’s 2013 re-election campaign.