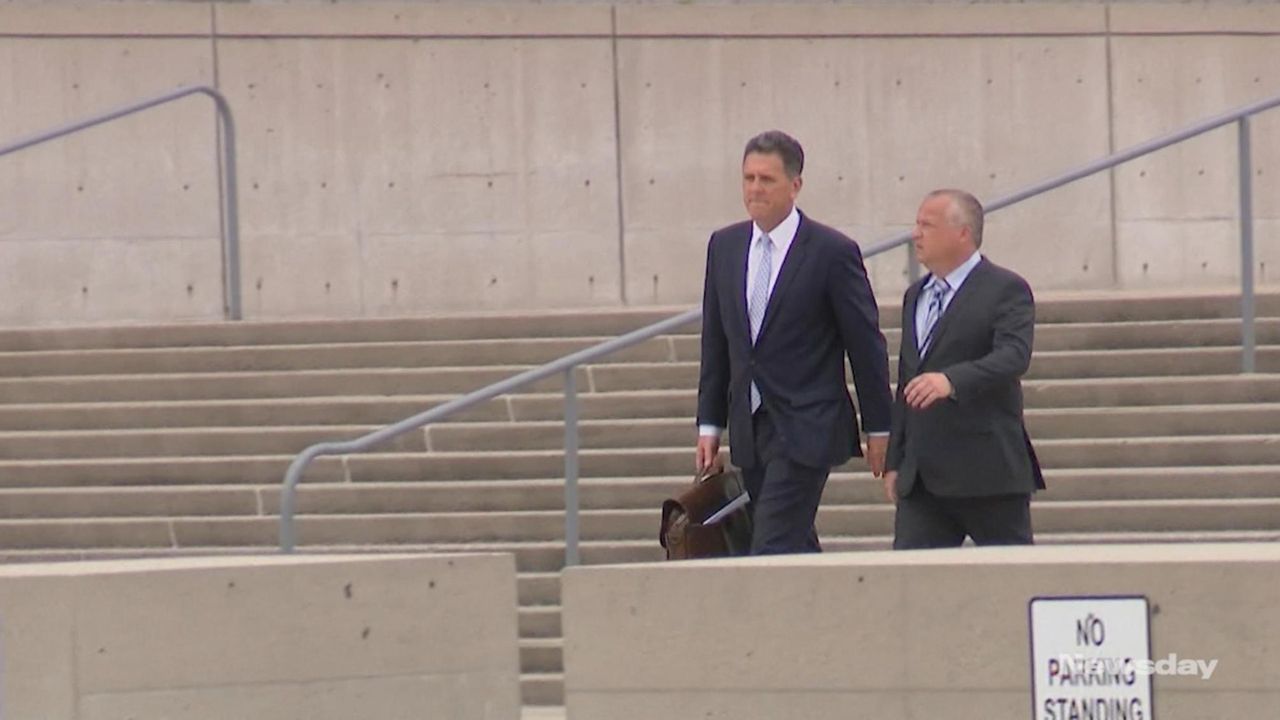 Rob Walker, who was chief deputy to former Nassau County Executive Edward Mangano, pleaded guilty Wednesday to a single count of obstruction of justice, a case that grew out of an investigation into county contracts. Credit: News 12 Long Island

“I knowingly and unfortunately … met with an informant working with the government and I asked him not to disclose the $5,000 he gave me,” Walker, 44, said in entering his plea at federal court in Central Islip.

The case grew out of a federal investigation into possible corruption in the awarding of contracts by Nassau County government, according to Eastern District prosecutors. Walker’s old boss, Mangano, and his wife, Linda, are awaiting sentencing after their conviction in March on unrelated federal corruption charges

Walker’s indictment resulted from what prosecutors said was his receipt of the $5,000 from an undisclosed county contractor and his attempts to cover up his actions. A second charge against Walker making false statements to the FBI was dropped as part of a plea deal. He declined to comment.

Eastern District United States Attorney Richard Donoghue said in a statement: “While holding public office, Walker attempted to conceal his corrupt conduct by urging a witness to lie to the grand jury. . . . Those who swear an oath to serve the public are expected to promote transparency, not obstruct justice. The Eastern District will hold officials accountable when they violate the public trust.”

Walker, who was highly influential in both county government and Republican politics, started out as intern for Mangano when the former county leader was in the county legislature. He went on to manage Mangano’s 2009 upset victory for county executive.

Besides his oversight of county government, ranging from county contracts to labor negotiations, renovations to the Nassau Coliseum and repairs after superstorm Sandy, Walker became a political fundraising powerhouse.

The Hicksville Republican Committee he headed took in $1.37 million between 2009 and 2018, according to the state Board of Elections. That was more than any hamlet, village or city Republican organization in Nassau County, with many of the donations coming from county contractors.

The money gave the committee the ability to buy a $204,000 skybox at MetLife stadium and allowed Oyster Bay-based Republicans, such as Walker and Mangano, to vie for control of the Nassau GOP with Hempstead Republicans, according to political observers.

Walker, who is now a consultant, also served as a state assemblyman, deputy parks commissioner in the Town of Oyster Bay and assistant to then-Town Supervisor John Venditto. His mother, Rose Marie Walker, is a Republican Nassau legislator and former Town of Oyster Bay councilwoman.

Walker’s attorney, Brian Griffin, of Garden City, said: “Today Mr. Walker pled guilty to a single count of obstruction of justice. The remainder of the indictment was dismissed. This negotiated plea agreement is and was a fair resolution of the matter. Mr. Walker accepts responsibility for his conduct and we will now turn our attention to sentencing matters.”

Under sentencing guidelines McConnell in court said he estimated Walker will face 12 to 18 months in prison but he added that the government expects to ask for a longer sentence. Griffin disagreed with McConnell’s interpretation of the guidelines and said he believes they would call for a sentence of between 10 and 16 months. Griffin said he would ask for a sentence below the guidelines.

U.S. District Court Judge Joan Azrack said the guidelines were only advisory and she would decide on a sentence after she gets the report from the probation department. Walker can only appeal the plea if he gets a sentence of more than 21 months, she said.

Federal law calls for a maximum sentence of 20 years but such a sentence is unlikely.

Walker was indicted in February 2018 on both the charges of obstruction of justice and lying to FBI agents. Prosecutors had said in court papers that the case centered around a $5,000 cash payment an unnamed contractor gave him in October 2014 after a University of Notre Dame home football game. They said Walker went to the game at the contractor’s invitation.

Walker spoke to the contractor several times “in an attempt to convince the contractor to conceal the existence of the $5,000 payment from the grand jury,” when he heard about the a federal investigation into Nassau County government, including the alleged payment, according to the papers.

When FBI agents questioned Walker about the situation, he made false statements, including denying he got any cash payments from the contractor, the records said.

Griffin previously had said that the government’s allegation, “even as accepted at face value,” was “not illegal conduct.”

Wednesday, he noted that his client was never charged with taking any money illegally.

The defense attorney added: “There is no tieback. There is no relation back to a contribution for any additional services for the county. … This is a 20-plus-year friend whom Mr. Walker took a personal trip with. And the U.S. Supreme Court has been clear on this issue. It is not illegal to do that.”

Walker’s indictment came more than two years after Walker confirmed, while testifying in the corruption trial of former State Senate Majority Leader Dean Skelos, that federal prosecutors were investigating his role in county contracts that went to political campaign contributors. Skelos and his son, Adam, were retried last July and found guilty of bribery, conspiracy and extortion charges.