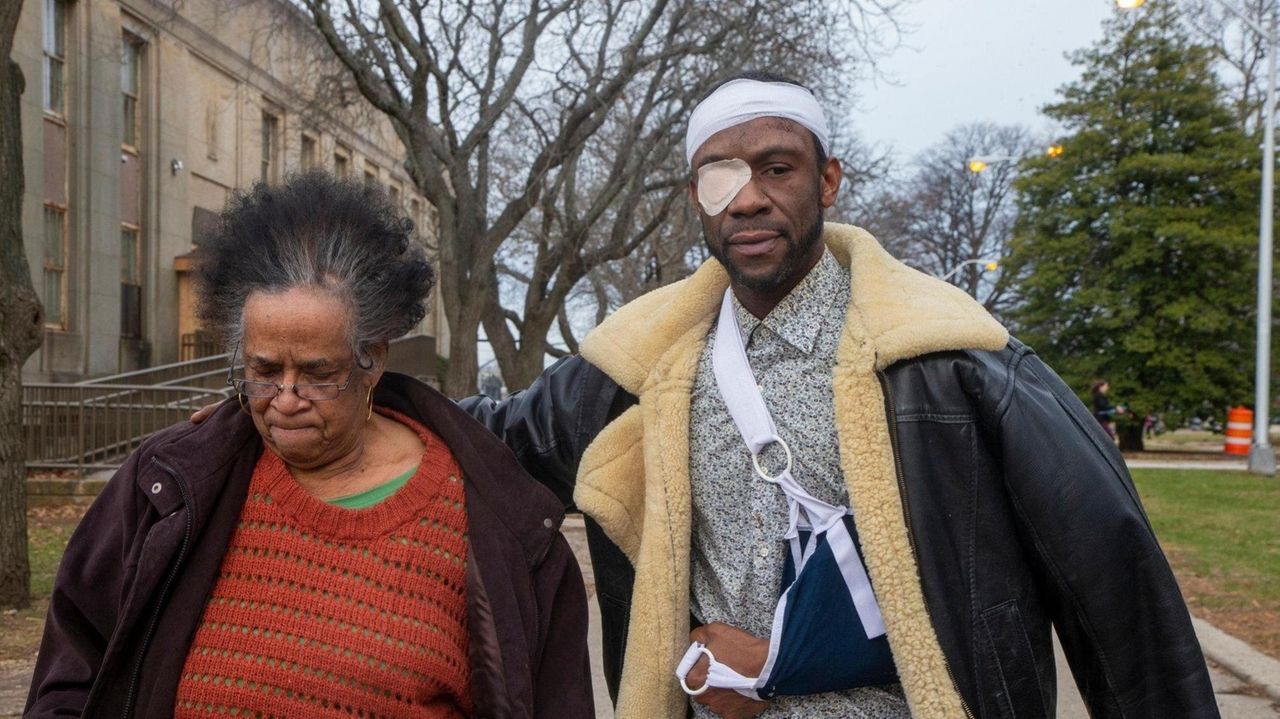 Akbar Rogers declined to discuss the specifics of his case as he left court Friday, but his mother, Natilia Bazile, offered her opinion of the incident. Credit: Howard Schnapp

The man subdued by multiple Freeport police officers in a controversial arrest captured in a viral video appeared in court in Mineola on Friday, his head heavily bandaged, with his arm in a sling and a patch over his right eye.

Akbar Rogers, 44, of Freeport had a brief appearance in Nassau District Court on charges of second-degree assault and resisting arrest relating to the Tuesday incident. Rogers, who was represented by the Legal Aid Society of Nassau County, indicated he would obtain private counsel. He is due back in court Dec. 23.

Rogers declined to discuss the specifics of the case as he left the courthouse with his mother, Natilia Bazile, noting his attorney was not present.

“It’s a high-profile case and I can’t say too much,” Rogers told reporters. “I don’t want to say anything that’s going to hurt me in the future.”

In a statement later Friday, Scott Banks, Legal Aid Society attorney in chief, said: "We believe the police conduct placing our client under arrest for very minor charges, which included the failure to pay a fine, was deeply disturbing, and raises serious issues of misconduct and excessive force."

Rogers called the resisting arrest charge “absurd.” Seven Freeport Police Department officers were involved in his arrest, with two seen on cellphone video  punching him. One officer was seen kicking him on the video posted to Instagram.

Police said Rogers was resisting arrest and reaching for his waistband. The Nassau County district attorney's office, which is reviewing the arrest, said Friday that no weapon was found.

Attorney William Petrillo of Garden City is representing the officers. He said Friday that "it is clear from any honest and objective view of the video that reasonable force was necessary to subdue a man clearly resisting.”

He added, “The individual ignored repeated commands to stop resisting. Once properly restrained, no additional force was used.”

Freeport suspect: 'I thought I was going to die'

Bazile blamed Freeport officers for their tactics, arguing there were other, less violent ways to bring her son into custody.

“I feel terrible for what they did to my son,” Bazile said. “You don’t do anything like that … I don’t know why they acted the way they did. They shouldn’t because he’s not a criminal and was not attacking anybody. All they had to do was handcuff him and take him in, not brutalize him."

Williams said he did not believe the suspect was resisting the police.

Williams said that the officers' punching, kicking and using a stun gun on Rogers were all an excessive use of force. “There’s no need to punch him; there’s seven people on him,” he said. “He’s not going anywhere.”

Williams said it is standard policy across the country to use the force necessary to make an arrest and prevent an escape.

“He’s not escaping anywhere,” Williams said. “It’s like a pack of dogs on a prey."

Cops involved in Freeport arrest remain on job; DA to do 'thorough review'

Freeport suspect: 'I thought I was going to die'Akbar Rogers described the incident in an interview late Thursday after he was released on bail. Anger, shock in Freeport: 'He got beat up pretty bad'Many criticized tactics used by police in the arrest of Akbar Rogers, but others said relations with local officers have not been bad. Cops involved in Freeport arrest remain on job; DA to do 'thorough review'A video shot by a neighbor that went viral shows at least two officers punching Akbar Rogers while he was on the ground.