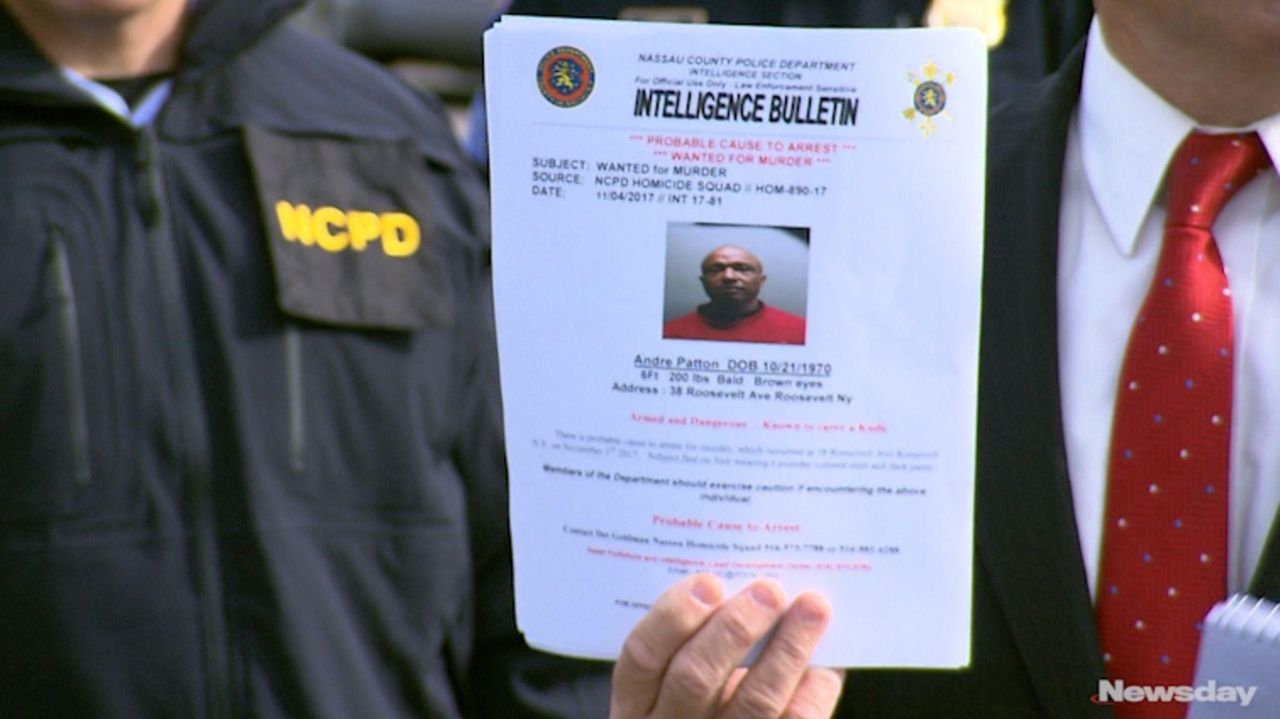 On Saturday, Nov. 4, 2017, acting Nassau County Police Commissioner Patrick Ryder announced that the department was looking for the suspected killer in the fatal stabbing of a 70-year-old deacon at a Roosevelt transitional home on Friday night. They believe the killer to be Andre Patton, 47, who also lived at the home.    Credit: News 12 Long Island

The manager of a halfway house in Roosevelt was stabbed to death, sparking a Saturday night manhunt for a suspect who police said lived at the home.

Police are looking for Andre Patton, 47, who “is considered armed and dangerous,” Ryder said Saturday morning at a news conference on the quiet residential street.

Logsdon, a Catholic deacon who lived and worked at the transitional home for homeless men, died at the scene, Ryder said.

Police do not know what motivated the killing, Ryder said.

Logsdon, Patton and one other person lived at the home at the time of the killing, Ryder said. The third resident, who was in the house but not injured, identified Patton as the suspect, police said.

Anthony House is run by the Society of St. Vincent de Paul of Long Island, a charity affiliated with the Diocese of Rockville Centre.

“Many of the residents are burdened by addictions that they need help overcoming, while others struggle with criminal pasts, long-term unemployment, and many other circumstances,” according to the organization’s website.

“Even at the time of his death, he was carrying out the Gospel message of caring for the poor as he has done faithfully for 33 years,” Dolan wrote in an email.

Online court records show Patton was arrested on March 18 and charged with a single count of assault with intent to cause physical injury, a misdemeanor. Patton pleaded guilty and was sentenced to intermittent imprisonment for 30 days and three years of probation, according to court records.

Alessandra Auricchio of Garden City said Saturday that she had worked with Logsdon when she had volunteered at Anthony House.

Logsdon “put everyone before himself,” said Auricchio, 23. “He was really, really dedicated to serving others and to helping these guys get back on their feet,” she said. “It’s devastating.”

Neighbors expressed shock at the killing.

“It’s so sad,” said Amy Brooks, 50, who has lived down the street from the halfway house for more than 20 years.

“The neighbors are going to be really shaken up,” she said Saturday morning, as she stood behind yellow police tape.

“This is one of the best streets in Roosevelt,” said Leroy Prophet, 77, looking over the block of modest homes ringed by chain link.

He has lived nearby for 50 years, Prophet said.

“I don’t remember anything happening like this before,” he said.