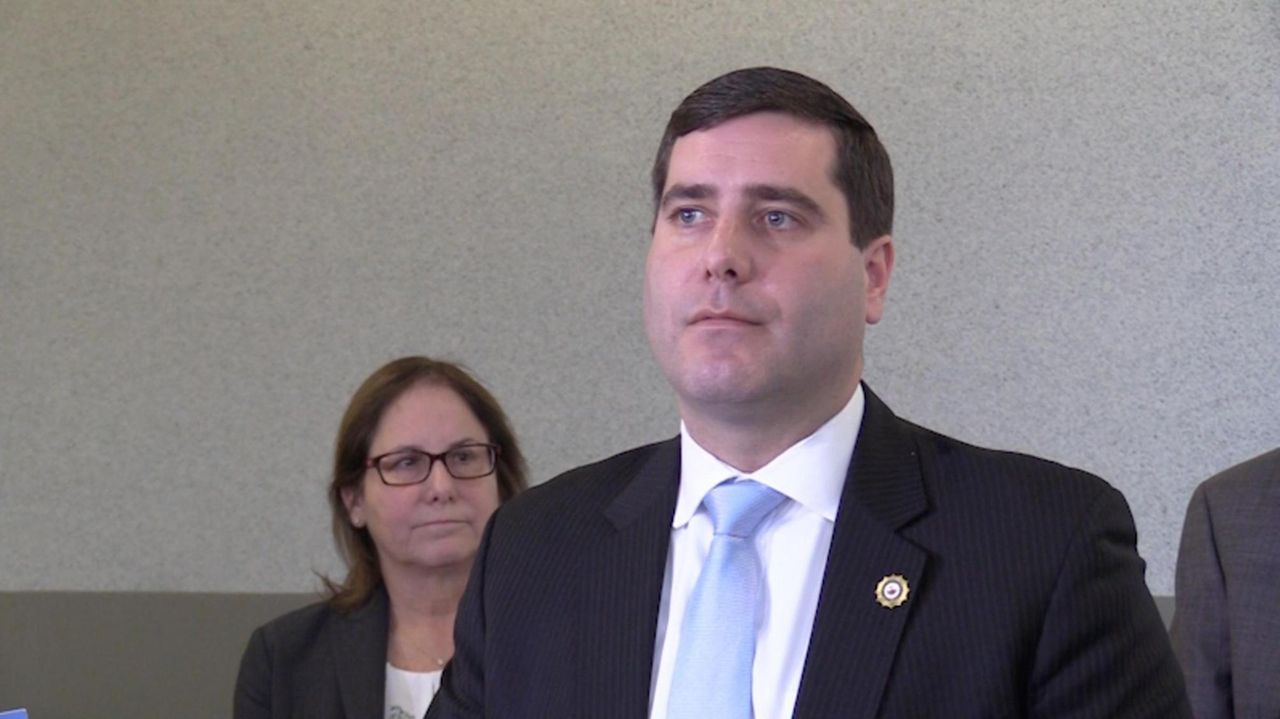 Suffolk County District Attorney Timothy Sini announced that a former bus driver and two aides who were tasked with transporting a child with autism to and from school were charged Tuesday with abusing the child. Credit: James Carbone

A former school bus driver and two ex-bus aides abused an autistic 9-year-old child whom they took to and from a BOCES school in West Islip, Suffolk prosecutors said Tuesday.

The alleged mistreatment, which took place on the school bus on seven dates in October 2018, was captured on the bus surveillance camera, prosecutors said.

Prosecutors said that, on multiple occasions, Roberts, in the presence of Contreras and LaGreca, kicked the boy, a student at the Masera Learning Center who is nonverbal. On one occasion, Roberts bent the child’s toes backward, causing him to cry out in pain, prosecutors said.

Roberts and Contreras also used the victim’s hand to slap himself in the face on several occasions, officials said.

“Visualize that for a moment — bending a child’s toes back while he screams in pain,” District Attorney Timothy Sini said at a news conference at the Suffolk County Court in Riverhead.

Each of the three defendants  was arraigned Tuesday before County Court Judge Timothy Mazzei, charged with multiple counts of first-degree endangering the welfare of an incompetent or physically disabled person, a crime punishable by up to 1⅓ to 4 years in prison.

Mazzei released the three  on their own recognizance.

The alleged abuse came to light, Sini said, when the boy’s parent became suspicious that something had happened to  him on the bus and contacted officials  of the Longwood Central School District, where the boy is a student.

Attorneys for the employees denied the charges.

"My client insists she did not do anything hurtful to the child on that school bus," said James D'Angelo, the Central Islip-based attorney for Contreras. D'Angelo has requested a copy of the surveillance videos.

In one incident, prosecutors said, the boy threw his shoe at the bus driver, who responded by throwing the footwear back in the direction of the child.

James Vlahadamis of Hampton Bays, LaGreca's attorney, said he has not seen the surveillance footage.  He said LaGreca helped raise a grandson who has special needs and has never been in trouble with the law.

“He feels horrible about this,” Vlahadamis said.

Ira Rosenberg, the Central Islip-based attorney representing Roberts, did not respond to a request for comment.

All three defendants were terminated from the bus line in October, Sini said.

East End Bus Lines and the Masera Learning Center, which is part of Eastern Suffolk BOCES, declined to comment.

Julie Davis Lutz, chief operating officer of Eastern Suffolk BOCES, said in a statement, "We are truly disheartened to learn about the disturbing allegations against an East End Bus Lines bus driver and two aides involving a student who attends our Masera Learning Center in West Islip."

Davis Lutz said BOCES was notified of the allegations by the student's home district and has "fully cooperated" with law enforcement.

"Our thoughts are with the student and their family during this difficult time," she said.

Roberts and LaGreca are due back in court March 27. Contreras is due back March 25.