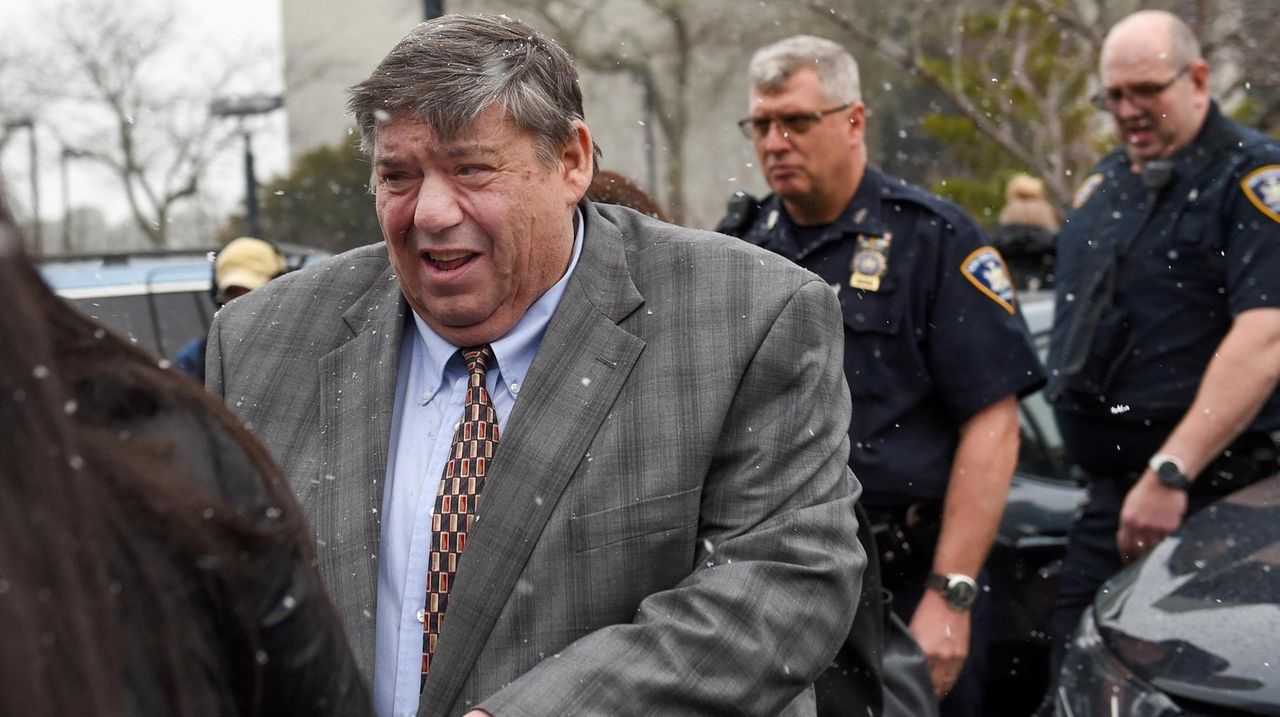 A jury on Wednesday convicted Thomas Murphy of Holbrook of multiple charges for driving into Boy Scouts hiking on the side of a road in Manorville, killing a 12-year-old boy. Credit: Newsday / Yeong-Ung Yang; Photo Credit: Newsday / Cecilia Dowd; McMorris family

A Holbrook man was found guilty Wednesday of driving drunk into a group of Boy Scouts hiking on the shoulder of a Manorville road and killing a 12-year-old — a  verdict that ended a nearly six-week trial marked by emotional testimony and the constant courtroom presence of the grieving boy's family.

A jury of seven men and five women deliberated for just over a day before announcing its decision at 2:22 p.m., finding Thomas Murphy, 60, guilty of all nine charges for his role in the horrific Sept. 30, 2018 crash on David Terry Road that claimed the life of Andrew McMorris, a seventh grader from Wading River.

As the forewoman read the verdict inside the hushed Riverhead courtroom, Andrew's mother, Alisa McMorris, sat in the same front row seat she has occupied since the trial began Nov.12. She buried her face in her hands and appeared stunned. At one point, she reached for the hand of her husband, John, an assistant scoutmaster who testified only weeks earlier about rushing to the aid of his dying son lying motionless on the shoulder of the road.

Murphy's daughters, seated only feet from the McMorris family, sobbed audibly and hugged their mother, Jackie. Thomas Murphy, his fate now determined, slumped slowly and quietly sat back into his chair. District Attorney Timothy Sini, sitting in the rear of the courtroom, let out a deep sigh as tears welled up in his eyes.

As she left the courtroom on the trial's last day, Alisa McMorris was overcome with emotion, clutching her hands over her heart.

"This was a completely unnecessary process for us to have to go through," McMorris said, citing Murphy's initial statements that he would "take responsibility" for the crash. "To make our pain, our loss, a thousand times, a million times worse. We trusted the justice system and they served justice for Andrew and for the entire Troop 161."

Murphy declined to comment as he left the courthouse through a brief snowstorm, refusing to answer questions from reporters.

Steven Politi, Murphy's defense attorney, said he was "disappointed" with the outcome, calling the crash an "awful" car accident but not a crime.

"Over the course of 15 months this case turned into something that I don't think it was," Politi said, vowing to appeal the verdict. "I don't think there was any crime committed here. I don't think my client was intoxicated. And I don't believe he drove recklessly."

Jurors declined to talk to reporters. But a female juror, contacted by phone Wednesday evening, said the defense failed to provide reasonable doubt on two of its central claims — that the Scouts were walking in the roadway and that a blood test, showing the defendant was legally intoxicated, had been contaminated.

“We did not want to convict somebody who did not deserve to be convicted,” said the juror, who asked that she not be identified.

Prosecutors contend Murphy spent the morning of the crash drinking vodka with three friends — Christopher DiMaria, Raymond O'Brien and Steven Meola — at the Swan Lake Golf Club in Manorville. DiMaria brought an opened bottle of Svedka vodka that he shared with Murphy and O'Brien. Meola does not drink alcohol, he testified.

The golfing foursome provided conflicting accounts of how much vodka was in the bottle — between one-third and one-quarter filled — although prosecutors contend the amount was significantly more. Murphy later purchased three mini vodka bottles on the 16th hole for himself, DiMaria and O'Brien.

As Murphy entered his white Mercedes SUV, Meola said he twice told his friend that he was too intoxicated to drive and offered to take him home. But Murphy disregarded the offer and told Meola he was capable of driving, prosecutors said.

Roughly a mile from the golf course, Murphy's SUV veered to the right, crossed a white fog line and crashed into the Scouts, who were on a 20-mile hike.

Law enforcement officials testified that shortly after the crash, Murphy smelled of liquor and appeared unsteady on his feet, with glassy eyes and slurred speech.

"Thomas Murphy, in the ultimate act of selfishness, got intoxicated and made the decision, despite his friend's efforts to stop him, to drive drunk," Sini said. "I made it clear from the outset that we would hold him responsible. I made it clear that we would offer no plea deal and that we would seek the maximum sentence … Nothing will bring Andrew back, but justice today — I hope — will allow the McMorris family, and all of the families affected, to close this chapter and to begin the long journey of healing."

Politi argued throughout the trial that his client was victimized by corrupt or incompetent county officials, from police and prosecutors to members of the toxicology lab, who rushed to judgment against his client to fit a pre-determined narrative.

The attorney suggested the blood sample was improperly drawn, stored and analyzed, potentially causing an elevated BAC level. And he argued the Scouts, poorly supervised by adults, had wandered into the road moments before the crash — despite a multitude of witnesses who testified the children were walking safely on the road's shoulder.

Sini said called the defense arguments "despicable … it was everyone's fault but Thomas Murphy's. Well, he got a wake-up call today. The jury didn't buy it. And they didn't buy it because it is complete and utter nonsense."

Scout's mom: Verdict brings healing after son's death"This won't bring Andrew back but maybe we can step forward now and heal together as a community," Alisa McMorris said moments after the verdict was read. Man charged in Boy Scout death was visibly intoxicated, police testifyOfficers testified that Thomas Murphy smelled of liquor, had bloodshot eyes and was unsteady on his feet. Lawyers give powerful closing arguments in Scout death caseBoth sides presented closing arguments to a standing-room-only courtroom packed with family and supporters of Thomas Murphy and the victim, Andrew McMorris.