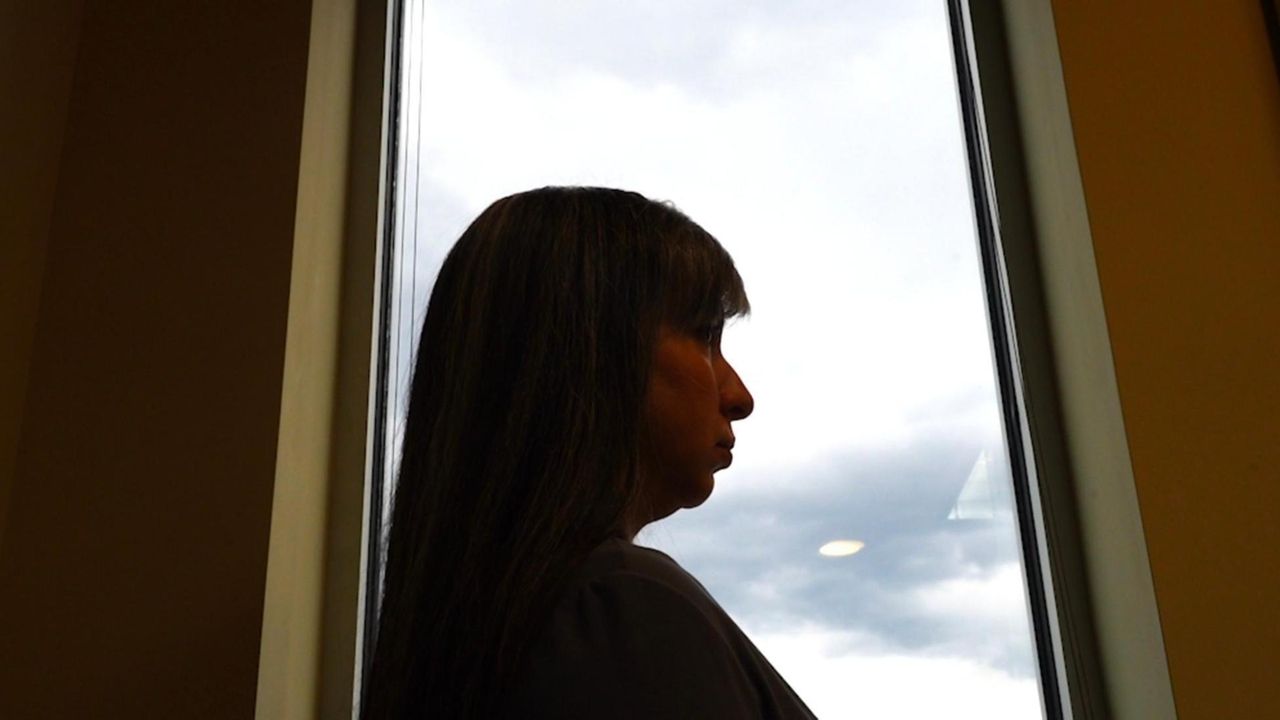 An Oakdale woman has filed a lawsuit in Suffolk County alleging a police officer in the Fifth Precinct in Patchogue repeatedly sexually abused her when she was a teenager in a youth mentoring program. Newsday's Steve Langford reports.   Credit: Newsday / Reece T. Williams; Debbie Egan-Chin; Howard Schnapp

An Oakdale woman has filed a lawsuit alleging a police officer repeatedly sexually abused her in a Suffolk County precinct when she was a teenager in a youth mentoring program, and other law enforcement officials she went to for help covered it up.

Annemarie Albate, 44, said in a lawsuit her attorney filed Monday in Supreme Court in Suffolk that "her complaints were not properly investigated and were buried on multiple occasions under the blue wall of silence" after the alleged abuse between 1992 and 1995.

Albate’s lawsuit alleges a troop leader of the Police Explorers, Officer Michael Trentini — also then her brother-in-law — sexually abused her in the Fifth Precinct in Patchogue, in his police vehicle and even during an Explorers trip to Arizona.

The plaintiff also says in the lawsuit that Trentini gave her what she thought were nonalcoholic daiquiris during one episode of abuse in 1992. After she passed out from alcohol, the teenager woke up to him raping her and ignored her pleas to stop, according to the lawsuit.

The complaint names Trentini as a defendant, along with the Suffolk County Police Department, Suffolk County and Learning for Life, a Texas nonprofit that the lawsuit says administered the Explorers Program. The company is an affiliate of the Boy Scouts of America.

David Besso, attorney for Trentini, who retired in 2014, said in a statement: "This matter was resolved years ago by the Suffolk County Police Department’s Internal Affairs Bureau. Mike Trentini was cleared of all charges and allegations made by the complainant and looks forward to challenging these allegations in a court of law."

A spokesman for Suffolk County Executive Steve Bellone didn’t respond to requests for comment. A Boy Scouts representative said Tuesday that the organization was reviewing the lawsuit.

The Law Enforcement Exploring program — commonly known as the Police Explorers — is aimed at providing mentorship to young people who aspire to law enforcement careers, giving them an inside look at the criminal justice system through training, competition and other activities, according to its website.

Trentini was married to an older sister of Albate’s at the time of the abuse, which also included physical abuse, but her sibling later divorced him, according to the plaintiff. Court records confirmed the couple's divorce.

Garden City attorney Bradley Gerstman filed the lawsuit for Albate, a professional artist, under the state’s Child Victims Act. The 2019 law created a special "look back" period that lasts until August during which plaintiffs who claim they suffered sexual abuse as children can file lawsuits aimed at holding their alleged abusers accountable — lawsuits previously blocked by time limits.

Gerstmant told Newsday that police ignored his client's pleas after she "went to multiple levels of leadership within the Suffolk County Police Department for help."

Albate filed a formal complaint with the Suffolk police’s Internal Affairs Bureau when she was about 20, but officials didn’t properly investigate the case, the lawsuit alleges.

Albate said in an interview in her attorney's office that internal affairs investigators ended their probe by sending her a letter saying "they could not prove or disprove" her allegations of sexual abuse, which she said started when she was 15 and continued until she was 18.

Newsday doesn’t publish the names or photographs of victims of alleged sexual assault without their explicit consent. Albate said she wanted to go public because there was "an entire precinct full of men" who didn’t help her when she told them Trentini was raping her.

"I want them just all to know that I didn’t go away and they didn’t make me quiet," Albate said in the interview. "They may have thought they made me quiet at the time, but it didn’t last forever. And they all have to know that I am still here. I am still thinking about you. And you didn’t get away with this," she said.

About a dozen police officials, including those up to an inspector's level in the precinct, "made a decision to not help a kid who says that she was raped and was being beaten and molested," the plaintiff added as she fought back tears.

The lawsuit demands unspecified monetary damages and a jury trial, citing claims that include assault and battery, negligence by the defendants who were charged with keeping her safe, infliction of emotional distress and civil rights violations.