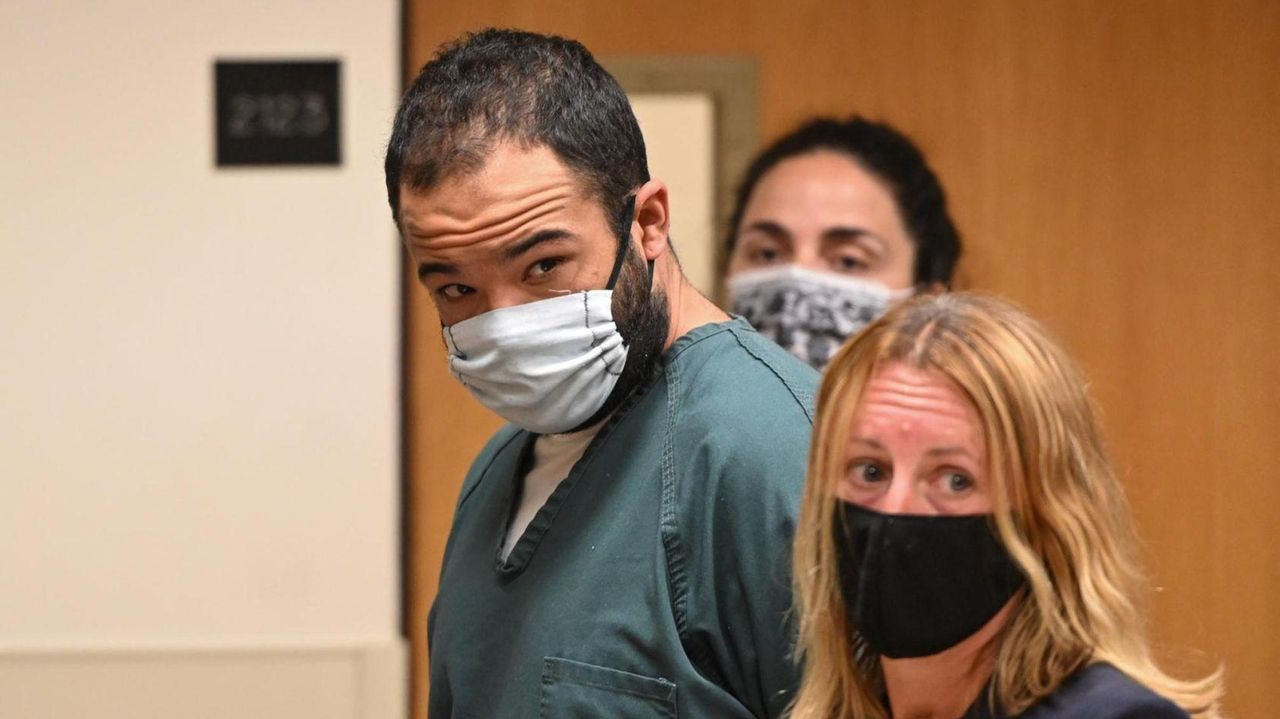 A Shirley man accused of raping and strangling a woman while she was walking in Coram last month was indicted on Wednesday. Credit: James Carbone

A Shirley man in custody on charges of raping and strangling a woman last month in a wooded area of Coram pleaded not guilty in a Riverhead courtroom Wednesday.

Jesse Diaz, 29, appeared in court wearing a green jail uniform and a mask after a grand jury indicted him on rape and strangulation charges in the May 27 attack. He only spoke briefly to Judge Chris Ann Kelley as he answered: "I understand."

Prosecutors have said the woman, who survived, was walking alone on a wooded path off Route 112 and Skips Road in Coram at 1 p.m. that Thursday last month, as a shortcut home from a nearby convenience store.

She heard the man run up behind her before he grabbed her by the throat, prosecutors have said. The woman struggled and scratched his face and she tried to scream for help, but Diaz strangled her until she lost consciousness, Assistant District Attorney Dena Rizopoulos said in court Wednesday.

Suffolk County District Attorney Timothy Sini said Diaz had no prior relationship to the victim.

"This is the type of crime that shocks us all," Sini said at a news conference after the hearing. "This is a savage crime."

After the woman was strangled the first time, Sini said, she woke up to see her feet being dragged along the path. Diaz again choked her until she lost consciousness, Sini said.

She woke up face down in the dirt during the rape, prosecutors said.

As he assaulted her, Diaz, wearing a face mask, "repeatedly said she would die there," Rizopoulos said.

After the attack, Diaz pulled down the mask and forcibly kissed the woman on the mouth, Sini said.

He then told her to stay where she was and close her eyes for 10 minutes. Diaz then fled, Sini said.

"The defendant is a menace and committed a savage criminal act," Sini said.

The victim went home and then to Stony Brook University Hospital where nurses had to clean leaves and dirt out of her hair. She was treated for her injuries including broken blood vessels and bruising on her neck. DNA results from a rape test are pending, prosecutors said.

Police arrested Diaz after the woman picked him out of a photo lineup. He had a scratch on his face, Rizopoulos said.

Kelley ordered him held without bail. Diaz is scheduled to be back in court July 13 for a virtual hearing.

If convicted, he faces up to 25 years in prison.

His defense attorney, Melissa Kanas of Suffolk County Legal Aid, said Diaz was born in Suffolk County and had been most recently living in emergency housing. He has a criminal record in Florida where he previously lived with his father, according to Kanas and prosecutors.

Police were able to identify Diaz through evidence and surveillance video from stores nearby where the rape occurred, Suffolk County Deputy Chief of Detectives Mathew Lewis said.

"This was a heinous crime, the likes of which doesn’t occur often in Suffolk County," Lewis said.