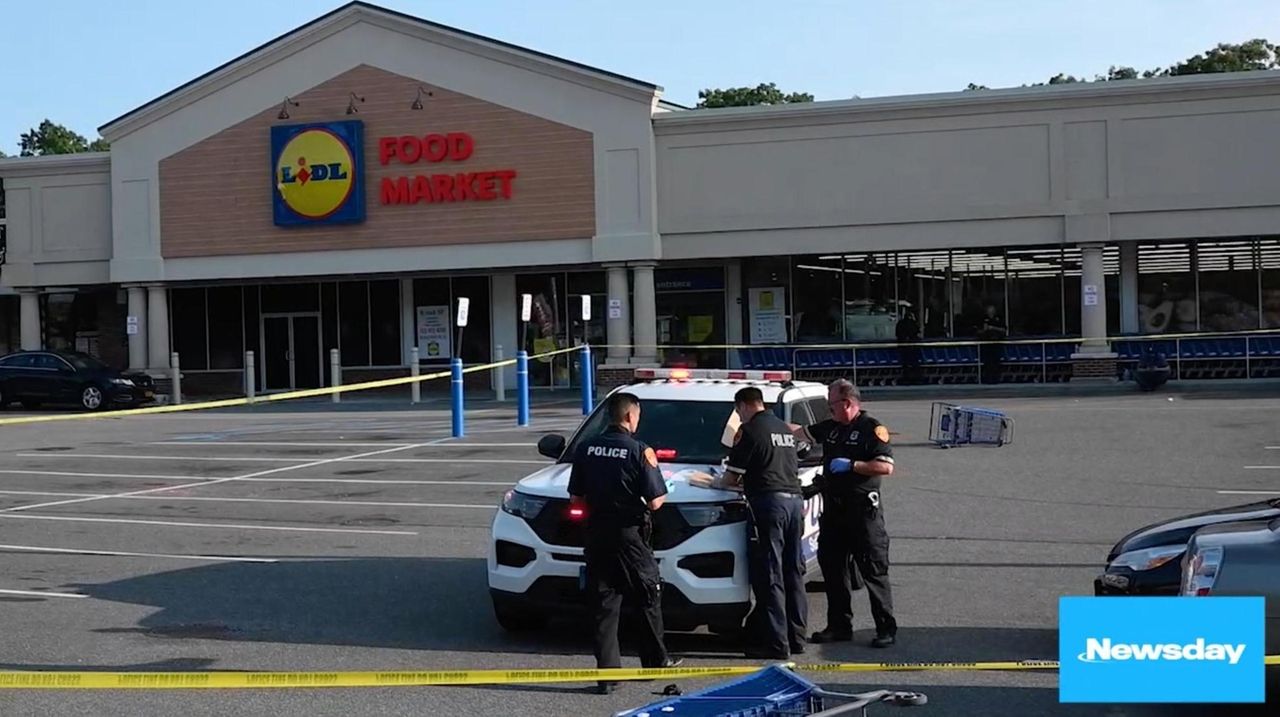 Suffolk County Executive Steve Bellone and Suffolk police officials announced two arrests in connection with a shooting in the parking lot of a Center Moriches supermarket Sunday afternoon, along with a new partnership with Crime Stoppers to help curb the increase of gun violence in the county.  Credit: Barry Sloan and James Carbone

Three men face weapons charges after an argument in a Mercedes-Benz spilled into the parking lot of a Center Moriches supermarket and two occupants of the vehicle traded gunshots, police said Monday.

One of the shooters was hospitalized in critical condition with gunshot wounds and the other was also shot and wounded, police said, but they did not provide information about his condition.

Two others in the Mercedes, Nigel Copeland, 20, of Middle Island, and L’Andre Simmons, 21, of Wyandanch, tried to flee on foot following the Sunday afternoon shootings but were apprehended by police officers with the help of a K-9 unit, said Acting Suffolk County Police Commissioner Stuart Cameron at a Monday news conference in Hauppauge.

It was not immediately clear if either Copeland or Simmons had an attorney.

Police declined to identify the names or ages of the two involved in the Sunday afternoon shooting other than to describe them as "adult men."

The incident began shortly after 4 p.m. Sunday when the four men, in a black Mercedes-Benz, pulled into the parking lot of the Lidl Food Market on Montauk Highway because two occupants were arguing, Cameron said. The four got out of the vehicle as the disagreement escalated and the two men arguing shot each other, he said.

"It’s 4:05 in the afternoon on a Sunday," Cameron said, "so you can imagine there were a lot of members of our community out shopping in that parking lot."

One of the shooting victims drove off in the Mercedes, which then crashed into a guard rail and overturned, Cameron said.

An officer responding to the scene noticed the car on Montauk Highway and stopped to give first aid "but ultimately he realized the individual had been shot," Cameron said. A handgun was recovered from the Mercedes, he said, and the injured man was charged with second-degree criminal possession of a weapon, Cameron said. The other shooting victim was airlifted to a hospital in critical condition.

Two other men in the car, later identified as Copeland and Simmons, fled, Cameron said. Witnesses gave descriptions to responding officers, who set up a perimeter "to try and contain the suspects from fleeing the area," he said.

A resident reported "suspicious people" in the area and Copeland and Simmons were located and taken into custody, Cameron said.

With the help of a K-9 unit, officers found handguns both men had when they fled the scene, Cameron said, adding that four firearms were ultimately recovered.

The gun violence comes as Suffolk has seen a 48% increase in shootings in the past year, said Suffolk County Executive Steve Bellone, who attended the news conference. Police have also seized 44 illegal handguns so far in 2021, a roughly 63% increase from the same time period last year, Bellone said.

"We do need the public’s help in our ongoing effort to stop gun violence," he said.

Suffolk police and CrimeStoppers are offering a $500 cash reward for tips leading to a gun seizure or arrest. Tipsters can call 800-220-TIPS. All calls can be anonymous.