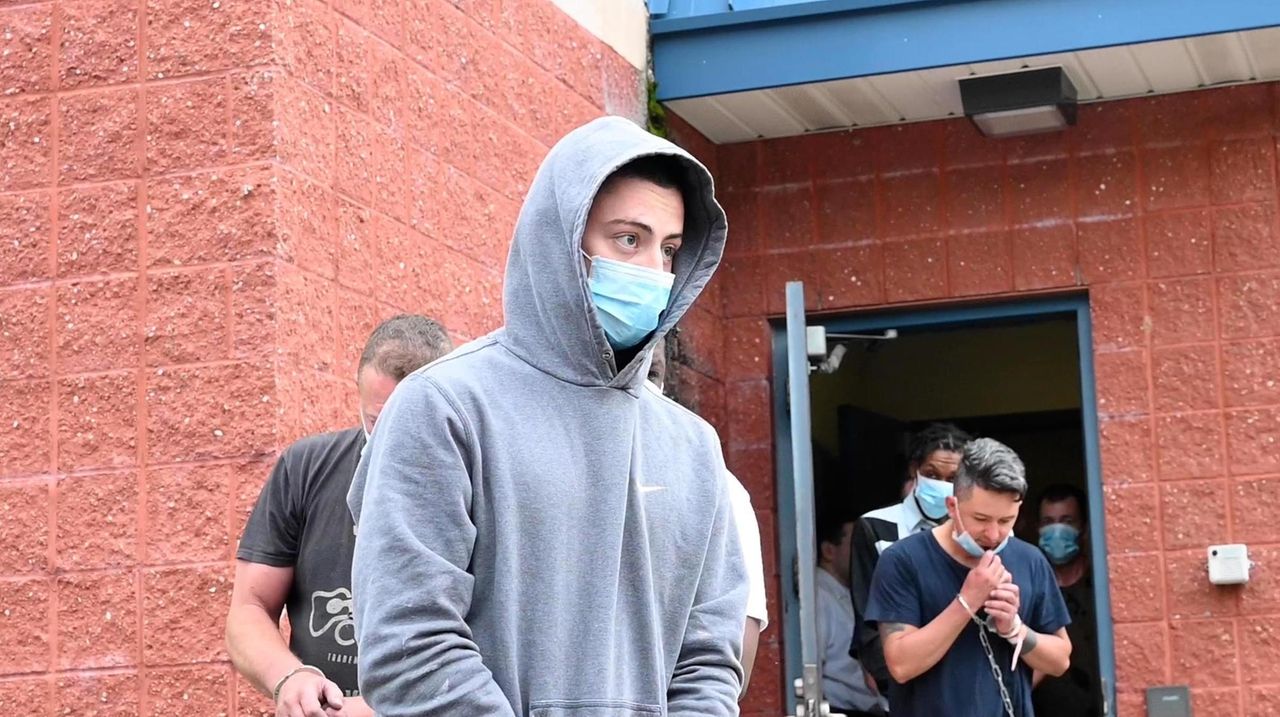 A 20-year-old man was arrested and on Monday arraigned in connection with the shootings of two men in Port Jefferson early Saturday morning. This was the second violent incident in the village in recent months. Newsday's Cecilia Dowd reports. Credit: Newsday / Cecilia Dowd; James Carbone; File footage

A 20-year-old man was accused in court Monday of shooting two men in a Port Jefferson parking lot over the weekend in what police said was not a random crime.

Ethan Ladd of Port Jefferson Station, was charged Sunday with two counts of first-degree assault, a felony. He was arraigned in First District Court in Central Islip where District Court Judge James Saladino held him on $25,000 bail and $100,000 bond.

Orders of protection were also issued prohibiting Ladd from contacting the two men.

"It is alleged that the defendant shot two victims — one in the stomach and one in the arm and the leg," said Assistant District Attorney Katherine Flinchum. "Both victims were required to undergo … surgery to treat their wounds. This is a serious case."

The two victims, 22 and 20, were shot shortly before 2 a.m. Saturday in a parking lot near Tommy's Place Restaurant and Bar on Main St., Suffolk police said.

Both men had surgery at Stony Brook University Hospital, according to charging documents.

"The shooting of two people on Main Street in the Village of Port Jefferson on Saturday was not random and was between individuals who knew one another," Suffolk police said in a statement.

Steve Politi, Ladd's defense attorney said "at least half a dozen violent gang members were pursuing my client and his friend" at the time of the shooting.

A high school graduate, Ladd has no prior criminal history. He has lived with his family, who were in court Monday, in Port Jefferson Station his entire life, Politi said.

Following court Monday, Politi denied that this client had shot either of the two men.

Tom Schafer, owner of Tommy's Place, said one of the victims sought help at the back of his restaurant.

"He hobbled across the parking lot to us," he said. "We were fortunate enough to have an EMT, right there on the patio that came out and put a tourniquet on the kid right away."

In March a man was shot dead on Main Street and earlier this month a man was stabbed to death in nearby Port Jefferson Station on the Greenway trail.

Kathianne Snaden, a village trustee and commissioner of public safety for Port Jefferson, said she's been requesting additional Suffolk police presence when the bars let out.

"We are looking at how we can work better with Suffolk County police to have them here in the later hours," said Snaden, adding that shortening the hours of operation at area bars remains a potential option.

Suffolk police said in a statement: "The department has officers specifically tasked with patrolling the Village of Port Jefferson during peak times of activity. Additionally, the department is in the process of bolstering patrols on the weekends and is reviewing other possible measures to add police presence to the area."

Ladd, who surrendered to police Saturday, is due back in court Friday.

Cops: Man arrested in shooting outside Port Jefferson restaurantThe 20-year-old was arrested Sunday after police say he shot two men outside a Port Jefferson eatery over the weekend.