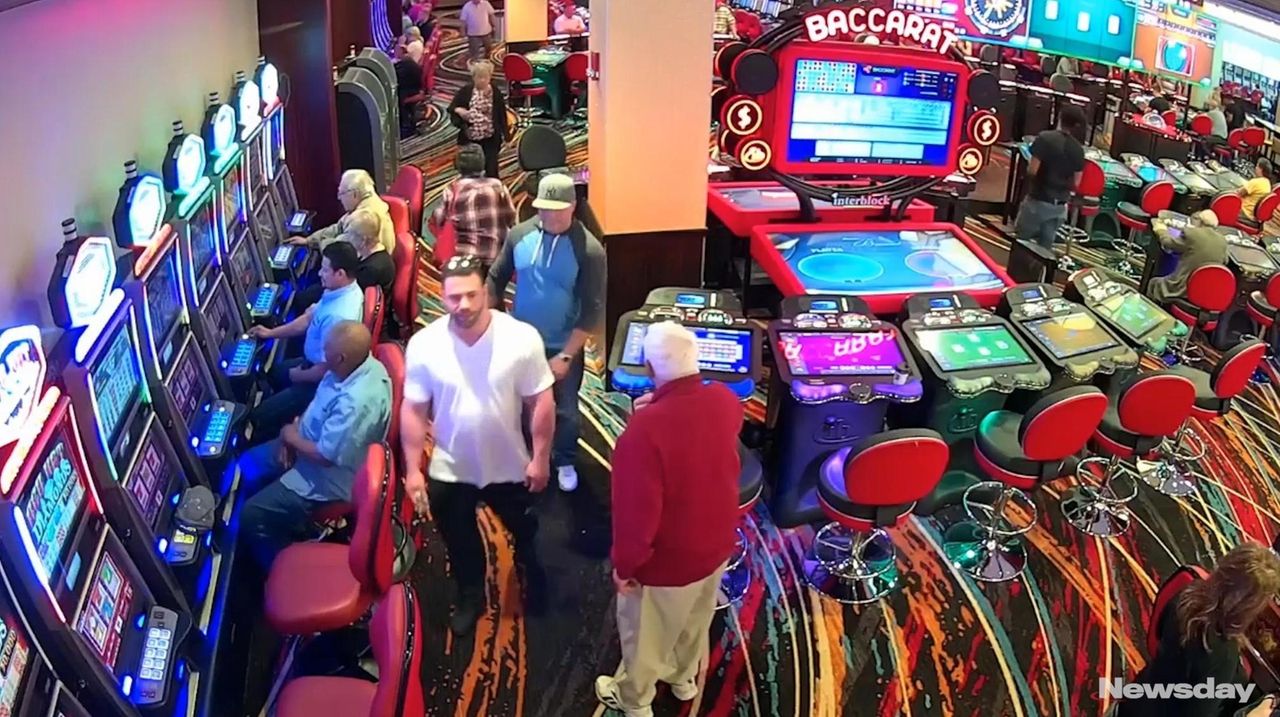 Daniel Caceres, 29, plotted with Nassau Police Officer Bruce Moeller to rob a high-roller who had won more than $50,000 at Jake’s 58 Hotel and Casino, Sini said during a news conference in Riverhead announcing the indictment of 13 people, including Moeller and the two other officers.

Moeller also conspired with his wife, Jake’s 58 cashier Christina Moeller, to rob an armored truck carrying cash from the casino, said Sini, who was joined by Suffolk Police Commissioner Geraldine Hart and representatives of the Drug Enforcement Administration and the U.S. Postal Service.

“I can’t explain to you why a police officer who works in Nassau County, who has a good job, a high-paying job, an important job, someone who swears to uphold the law, to enforce the law, then decides to violate that public trust,” Sini said.

“The message here is nobody is above the law,” the district attorney added.

Sini said law enforcement officials learned about the casino robbery conspiracies while investigating Caceres, who has allegedly been leading a ring that distributed marijuana, cocaine and other drugs since October 2016.

According to prosecutors, during the May incident at Jake’s 58, Christina Moeller sent her husband a text about a gambler who had won more than $50,000. Bruce Moeller was armed and flashed his badge as he and Caceres walked into the casino to hunt for the high-roller, but they did not find the man and gave up on the robbery plot, Sini said.

Christina Moeller also provided information to Bruce Moeller that he used to plot the robbery of an armored truck, Sini said. The district attorney said evidence collected by investigators suggests the plots were motivated by greed — and the thrill of plotting a casino heist.

“It sounds like something right out of a bad movie,” Sini said, “or maybe a good movie.”

Glen White, a spokesman for Jake’s 58, said the casino has been cooperating with authorities.

An indictment unsealed Wednesday also charged Nassau police Officer Erik Skoglund, 28, of Port Jefferson Station, with conspiracy and criminal possession of a controlled substance. Sini said Caceres arranged to have at least eight packages of marijuana shipped to Skoglund’s home from California. Skoglund would then deliver the drugs to Caceres, or arrange for Caceres to pick them up from his home, he said.

In a text to Skoglund, Caceres said, “Our jobs rely on the same thing LOL. When crime calls, we come.”

“LOL You’re just on the other team,” Skoglund responded.

“Same team,” Caceres fired back. “I employ you.”

Skoglund’s attorney Mark Alter said Skoglund will plead not guilty when he is arraigned next week. “Officer Skoglund is a respected Nassau County police officer,” Alter said. “He was not involved in any conspiracy.”

Nassau cop Karen Ernst, 32, of Bethpage — Skoglund’s girlfriend — was charged with criminal facilitation. Her attorney, Brian Griffin, said in an email late Wednesday that Ernst would plead not guilty to a single misdemeanor charge.

“Officer Ernst is a well regarded and highly respected police officer having served and protected the residents of both New York City and Nassau County,” said Griffin of Garden City.

All three cops have been suspended without pay, Nassau police said.

“Although all defendants are entitled to due process, it is extremely disappointing and disheartening to the department,” Nassau police Commissioner Patrick Ryder said. “We hold our members to an exceptionally high standard and these individuals do not represent the professionalism and honesty exhibited by the men and women of the Nassau County Police Department.”