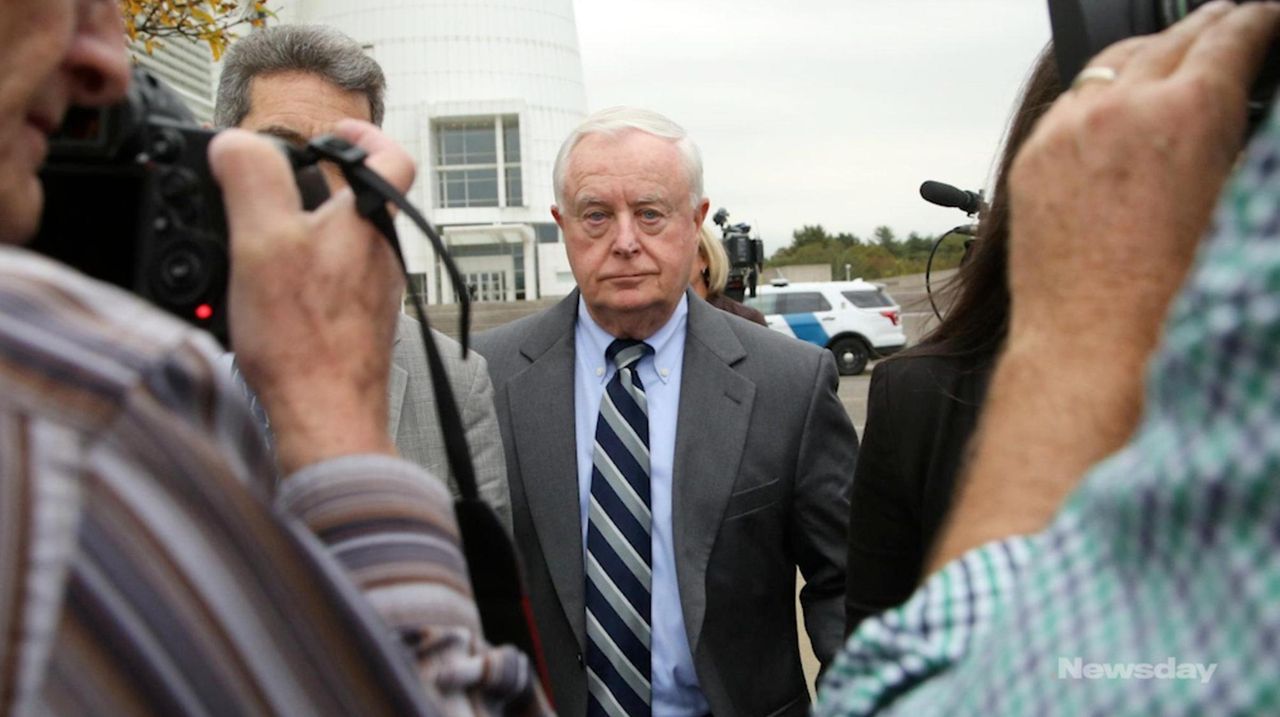 This story was reported by Nicole Fuller, Robert E. Kessler and Bridget Murphy. It was written by Murphy.

A key figure in the obstruction of justice case against former Suffolk County District Attorney Thomas Spota and one of his ex-top aides, Christopher McPartland, was in federal court Tuesday to watch jury selection.

Christopher Loeb, 33, whose beating by former Suffolk Police Chief James Burke led to Burke's arrest and allegations that Spota and McPartland tried to help cover it up, said he came to the Central Islip courthouse to "absolutely" see justice is done.

Loeb, who won a $1.5 million lawsuit settlement against Suffolk after the 2012 beating at a police precinct, also said in an interview he isn't holding any grudges.

"I forgive everyone involved," Loeb said, adding: "We all have to be held accountable for what we did."

At no time in the several hours that Loeb was in the courtroom taking notes did Spota or McPartland turn to look at him.

Loeb, a recovering heroin addict who said he's been sober since February and now attends a 12-step program, job training and church, took a third-row seat behind the defense table Tuesday after one of the final rounds of jury selection got underway.

It is expected to conclude Wednesday, with the final panel and alternate jurors picked from a group of at least 60 potential jurors.

Opening statements in the case are planned for Thursday.

Spota, 78, of Mount Sinai, and McPartland, 53, of Northport, who had served as the ex-district attorney's anti-corruption unit chief, are standing trial on four felony counts.

Prosecutors contend the two agreed, along with Burke and other police officials, to conceal Burke’s role in the assault of Loeb — then a handcuffed burglary suspect — in December 2012 and to obstruct a federal probe to protect Burke.

The indictment also alleges the defendants, Burke and others also used intimidation and threats to pressure one or more witnesses, including co-conspirators, not to cooperate with a federal probe, to provide false information or testimony, and to withhold information from authorities and the grand jury.

U.S. District Judge Joan Azrack dismissed 17 of 37 potential jurors after questioning them Tuesday morning, some because they wouldn't get paid by their employers if they served and others because they had travel plans or other commitments. At the day's end about 40 potential jurors were held over for the final pool.

One prospective juror replied, "I can't say for sure," when Azrack asked if he could put aside news reports about the case and decide based on the evidence.

"It was on the front page of Newsday on Sunday," the man said before his dismissal.

Before Tuesday, the jury pool was whittled down to about 150 people from an initial group of 400 after a survey with 45 questions that included whether potential panelists had any connection to people listed, including some prominent Long Island politicians.

The questionnaire also had queries about alcohol abuse and mental illness, signaling those topics could play a role in the trial. Azrack said Tuesday that "major testimony in the case" will come from people who had "problems" with alcohol.

The defendants have been free on $500,000 bond each since their arraignments and not-guilty pleas in October 2017.

If convicted, each would face up to 20 years in prison, but likely would receive less severe punishments.

Prosecutors have said two former Suffolk police department members, whom they haven’t named, are cooperating with the government after pleading guilty to obstruction of justice.

The U.S. attorney’s office has said dozens of witnesses will testify for the prosecution, including some current and former law enforcement officials.

They will detail the Loeb assault and the “long-standing and far-reaching obstruction of justice conspiracy” that the defendants spearheaded with Burke and others, according to prosecutors.

Government officials claim that testimony will be backed up with other evidence, such as phone and cell site records, photographs and financial documents.

But the defense insists Spota and McPartland committed no crimes.

Lawyers for the defendants contend Burke never admitted to Spota and McPartland that he had assaulted Loeb and actually “vociferously denied it” — negating the government’s theory that both knew Burke was guilty and took steps to help him cover it up.

Burke, of St. James, in November 2016 was sentenced to 46 months in prison for beating Loeb — who stole a duffel bag from Burke’s police vehicle — and orchestrating an elaborate scheme to try to conceal the crime.

In December 2012, Loeb, then 26 and living in Smithtown, broke into Burke’s department sport utility vehicle in St. James and stole the duffel that prosecutors said had a gun belt, magazines of ammunition, a box of cigars, sex toys and pornography inside it.

Burke, following his 2015 arrest, pleaded guilty in 2016 to obstruction of justice and violating Loeb’s civil rights. He served almost all of his prison sentence before his release last year to home confinement.

Before his role as Suffolk’s police chief from January 2012 to November 2015, Burke headed the detective unit for Spota’s office.

Sources previously told Newsday that Burke is not expected to testify at Spota and McPartland's trial.

Loeb said Tuesday he'll likely to return to court as the trial progresses, although he conceded: "I don't think anyone wants me here."

On Spota's role as a defendant, he added: "I don't want to see any man go through what I went through."

Former DA Spota's obstruction trial to start TuesdayThe longest-serving Suffolk DA is charged with interfering with a probe into then-police Chief James Burke's beating of a suspect in 2012.