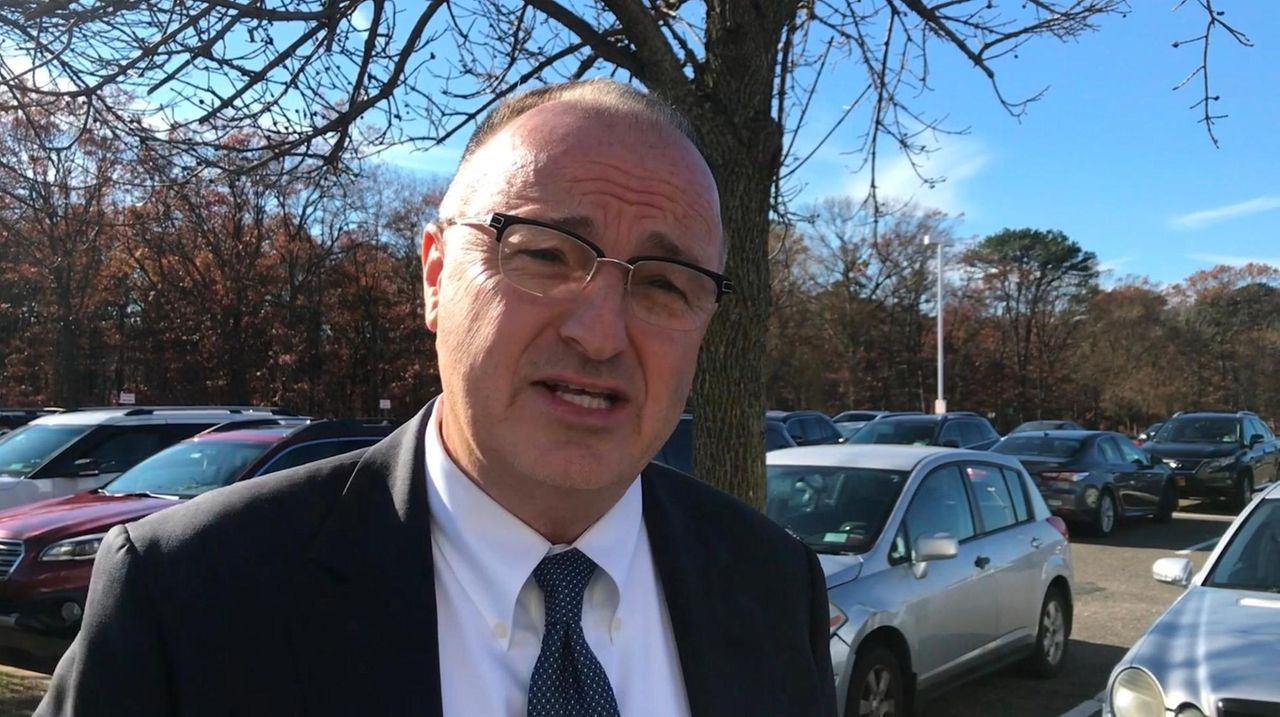 Suffolk County Legis. Robert Trotta said on Tuesday that after hearing testimony in the Spota/McPartland trial he is "greatly concerned"  because some of the union officials that were spoken about during the trial are still on the job. Credit: John Roca

The June 2015 revelation that federal officials had reopened an investigation into whether Suffolk Police Chief James Burke beat a prisoner put District Attorney Thomas Spota into a panic, and he demanded to know who "flipped" and exposed the cover-up effort, a government witness testified Tuesday at Spota's trial.

"Somebody's talking. You better find out fast, if it's not too late," Spota told ex-Suffolk police Lt. James Hickey during a meeting in Spota's office in Hauppauge, Hickey recalled.

Hickey, in testimony that directly tied Spota to the alleged conspiracy, told jurors in U.S. District Court in Central Islip that Spota also asked him: "Who do you think flipped?"

The prosecution witness said Burke and Spota's anti-corruption chief Christopher McPartland, his current co-defendant, also were there — four of the five members of a group that called themselves "The Inner Circle," all trying to figure out why the cover-up they'd cooked up after the 2012 beating was crumbling.

Hickey said he suggested perhaps one of the police officials involved had been scooped up or "kidnapped," a technique used by law enforcement in which a potential witness is approached discreetly and persuaded to be interviewed by federal officials.

But Spota shot down that idea, the witness said.

"The feds don't do that. The feds show up at your house at 6 in the morning. They show up at your job. They try to embarrass you. They're bad people," Hickey said Spota replied.

The district attorney believed Kenneth Bombace, one of the three detectives who took part in the prisoner assault, was the "weak link," Hickey recalled.

He said Suffolk's top law enforcement official then issued a threat against Bombace.

Burke also gave Hickey a message for Bombace and two other detectives from the criminal intelligence unit who also took part in beating prisoner Christopher Loeb, according to the witness.

"Remind those guys," the Suffolk police chief of department said, "what happens to guys who go against the administration."

Hickey took the stand in the third week of Spota and McPartland's obstruction of justice trial.

The key prosecution witness said he also was part of the "The Inner Circle," along with then-Chief of Detectives William Madigan. Hickey said the group's nickname was coined in November 2005, when he began leading the police department's criminal intelligence unit.

The 55-year-old former cop said he took part in the cover-up attempt after Loeb's beating because he knew what would've happened if he refused.

"If you cross Tom Spota, Chris McPartland, Jimmy Burke, you have made sworn enemies of the three most powerful men in Suffolk County," Hickey said.

Hickey said members of "The Inner Circle"  would destroy enemies financially, personally and professionally, even going after a target's family.

"I was in 'The Inner Circle' for 10 years. I know how they operate," the witness said. As the group saw it, "if you crossed one, you crossed all," according to Hickey.

To act otherwise would be "seen as disloyal," and "you would be out of 'The Inner Circle,' " he added.

Hickey also detailed for jurors the dynamics of the relationships among some group members.

McPartland, he said, "would be the first person Jimmy turned to when he was in trouble.”

Hickey said he retired in December 2016 after 30 years on Suffolk's police force to preserve his pension before pleading guilty to obstruction of justice in federal court a month later.

“I participated in the cover-up of an assault of a prisoner by my then-boss, James Burke," the witness told prosecutor Lara Treinis Gatz.

Spota and McPartland, who maintain their innocence, say they couldn't have been part of trying to conceal Burke's actions because Burke never admitted his guilt to them.

Burke, who was Spota's top investigator before he became chief, punched Loeb in a police precinct hours after the now-recovering heroin addict stole a bag from Burke's police vehicle on Dec. 12, 2014, according to testimony.

Burke pleaded guilty in early 2016 and served most of a 46-month prison sentence before his release to home confinement last year.

But Hickey's demeanor was steady and confident Tuesday as he continued to field questions from the prosecution, including some that drilled down into his perceptions of the mentality of those who had been in charge of Suffolk law enforcement.

Hickey said in addition to "The Inner Circle" moniker, that Spota, Burke and McPartland called themselves "The Administration" as the three men in charge of law and order in the county.

Hickey's detectives in the criminal intelligence unit were known as the "palace guard" of Burke's kingdom, the witness added.

"They would do anything and everything their king, Burke, would ask them to do," Hickey added.

When it came to the Loeb beating, the palace guards didn't let their king down, Hickey said Burke told him.

Later that same day, Burke gave Hickey a description of Loeb's beating in the Fourth Precinct and said Burke was in a celebratory mood.

"Burke told me that the criminal intelligence detectives did themselves proud, that they beat the hell out of Christopher Loeb," the witness said.

Hickey testified that McPartland was specially chosen to prosecute Loeb, with Burke remarking: "Chris will take care of it, bro."

Burke and other detectives involved in Loeb's assault later bragged about it at the criminal intelligence unit's holiday party at Oheka Castle, according to Hickey.

No one was worried about Loeb then, he said.

But the witness said that changed "dramatically" in January 2013, when another detective, Robert Trotta, posed questions at the Fourth Precinct about whether other cops saw Burke beat a prisoner there.

Trotta retired from the police force after his election that November as a Suffolk legislator. But his questions earlier that year "set off major alarms in 'The Inner Circle,' " Hickey said.

Trotta, along with John Oliva and William Maldonado, were the detectives that in September 2012 Burke took off a federal task force investigating MS-13-linked homicides, the witness told jurors.

The three were loyal to the feds, "who we hate," Hickey recalled Burke saying.

The witness said the real reason behind their removal was to cut Trotta's ties to federal officials to minimize his power.

Spota became worried about Trotta and Burke was panicked after Trotta's visit to the Fourth Precinct, Hickey said.

But the witness recalled McPartland said he didn't think federal officials in Washington would approve an investigation into a chief's actions since Loeb didn't suffer serious injuries and was "a career criminal."

The witness told Treinis Gatz, the prosecutor, that no one ever made a comment that there was nothing to worry about because Burke was innocent.

"We talked openly about it, about the fact that Burke beat the hell out of a prisoner and we had to cover it up," Hickey said.

That same month, "The Inner Circle" took aim at a new target after a Newsday article by Tania Lopez about the removal of the detectives from the task force.

Hickey said Oliva, believed to be leaking to Lopez, had become an enemy.

The witness said Burke, whom he'd heard leak stories to many Newsday reporters, called Oliva a "rat" who deserved retaliation.

Former Suffolk prosecutor Spiros Moustakas previously testified about a wiretap investigation to see if Oliva was leaking confidential information to the media, saying Spota spent a lot of time in 2014 listening to tapes of the detective's calls.

Moustakas said "officer safety" was the reason cited for the wiretap on an application that Spota signed.

Hickey testified Tuesday the Oliva wiretap "had nothing to do with officer safety," which was a "cover story we could use to get up on a wire."

The witness also described being under "daily, nonstop constant pressure" to make sure his detectives, whom he said took part in the beating with Burke — Bombace, Leto and Malone — kept quiet, especially after Loeb's lawyer went public with beating allegations.

More panic ensued in June 2013 when the FBI served subpoenas, including to two of Hickey's detectives, Hickey recalled.

The witness said he spoke to all his detectives that same day after McPartland ordered him to "find out what they said to the FBI and what was said to them."

The detectives "were a wreck," he said, adding that Burke sent a message to the detectives through him that day.

"Burke told me to tell them that he had the two smartest lawyers he knows working on this, Spota and McPartland, and they were going to get my guys real lawyers, not [expletive] union lawyers," Hickey said.

The witness said Spota and McPartland would tell him: "This is about keeping Jimmy out of jail."

Hickey said in 2013 he began drinking after work, starting with a glass of wine after dinner.

"I felt like I had the whole weight of this conspiracy on my back," the witness said.

He added that in the summer of 2013, he was drinking a bottle of wine and half a bottle of vodka at night before going to bed.

The witness said he was hospitalized at the end of the summer because of pancreatitis after his excessive drinking and never drank again after that hospital release.

Hickey also said the drinking didn't compromise his memory and he never drank at work or during conversations with Spota or McPartland.

He also recalled Tuesday that Burke was elated in December 2013 after an FBI official called him and said the Loeb probe was over and he'd been cleared.

But by fall 2015, Hickey said he learned Bombace had testified before a federal grand jury, and Burke was "extremely paranoid."

Hickey said he wasn't sleeping much, with pressure to continue the cover-up ramped up again, and his wife took him to Huntington Hospital in October 2015.

The witness said he remembers a doctor telling him he was having a mini-stroke, but nothing else until he woke up a day and a half later.

About a week later, federal investigators knocked on his door with a subpoena and he took it and drove straight to his police union's office, the witness said.

Hickey said Burke told him that night that Leto "had collapsed in the grand jury," or told the truth.

Burke said then his attorney was prepping a bail package for him and he didn't mind "doing three years, playing cards with mobsters" but needed Hickey "to be strong," the witness recalled.

Hickey said Burke meant one thing: to "not cooperate against Spota and McPartland."

Power on Trial: Ex-cop links McPartland, Spota to cover-upFormer Suffolk police Lt. James Hickey testified about what it meant to be in the "Inner Circle." Spota's obstruction trial: How we got hereFollow Newsday's coverage from the beginning of the case against Thomas Spota. See notable moments from Spota's careerThomas Spota was elected district attorney in 2001 as a corruption fighter. He retired in 2017 after being indicted on federal charges. Here's a look at Spota's career. Spota through the yearsThomas Spota has been serving as Suffolk County's district attorney since he won his first ...