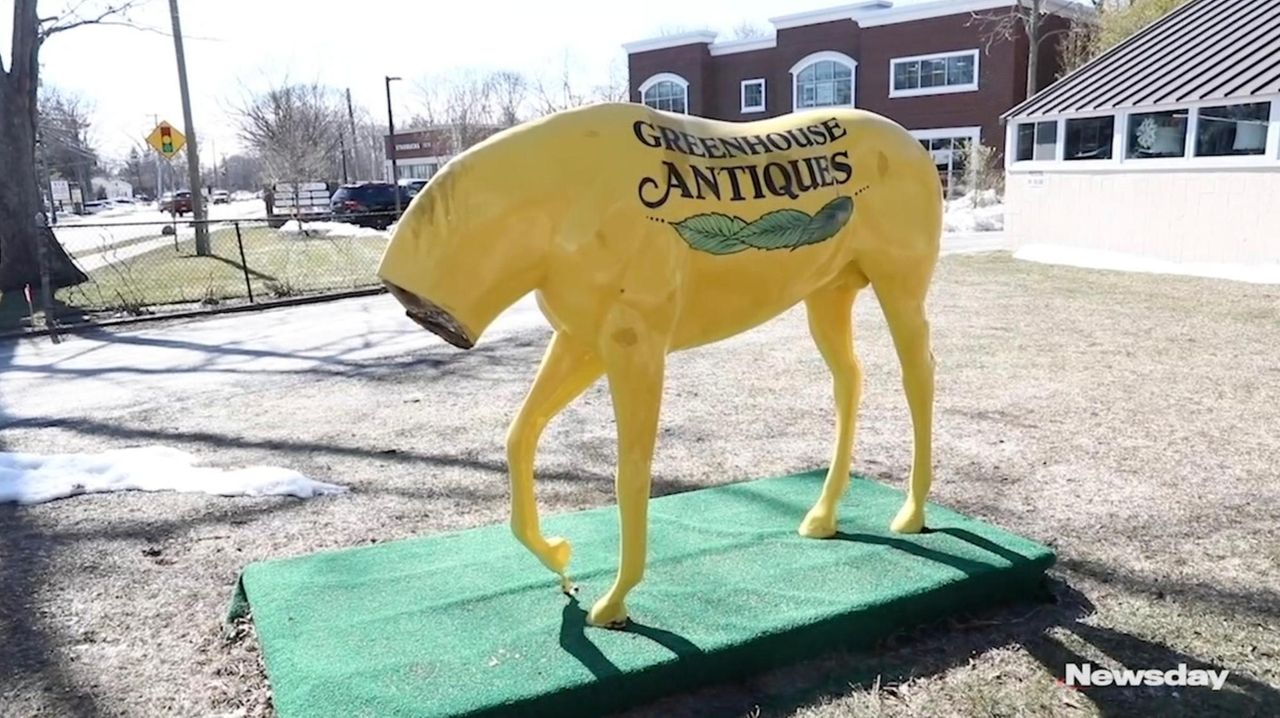 The yellow horse, a mascot outside The Greenhouse Antiques and Collectibles in St. James, had its head stolen in January. On Friday, it was returned. Newsday’s Steve Langford has the story. Credit: Newsday / Chris Ware

The kids were just horsing around.

That's the explanation Luciano Apadula, owner of The Greenhouse Antiques and Collectibles in St. James, got from the apologetic teenage girl who on Friday morning, accompanied by her mom, returned the missing head of his vandalized store mascot — a big, yellow fiberglass horse named Taxi.

The return came not long after Suffolk County police sent out a crime alert about the "stolen" horse head, offering to pony up a Crime Stoppers reward for any info leading to an arrest in the case.

Police said the statue, mounted outside the shop on North Country Road, had been vandalized sometime around 1:15 a.m. on Jan. 18. The incident was captured on surveillance video police described as hazy at best.

Apadula said the statue, worth about $2,000, had been a gift years ago from a local artist. Big and yellow, the words GREENHOUSE ANTIQUES over green fronds emblazoned on its hide, Apadula called him Taxi. Like the cab.

Apadula said it turned out that media coverage apparently made the girl and her friends realize what they'd done was no mere horseplay.

So hours after police issued the alert, Apadula said, he arrived at his store to find the girl and her mother waiting for him, fake horse head in hand.

"The mother brought the daughter down and she said, 'Go ahead, tell him what happened,' " Apadula said. "She said, 'I'm sorry, I'm the one who broke the horse's head.' …. She really couldn't explain [what happened] and I didn't want to prolong the agony."

Apadula said he called Suffolk police and left a message for the detective handling the case, saying he was not going to press charges.

"My name is Luciano Apadula and I'm missing a horse head," Apadula recalled. "I think that says it all — and now I hope the fact I've got it back as I did says it all, too. . . . That's all that matters."

Police confirmed later Friday that the head had been returned and that charges won't be pressed.

The next step, Apadula said, is to send Taxi off to the glue factory in hopes of reattaching the head.

"It took a lot for them to come here, for this girl to step up," Apadula said. "We all have kids. We all did stupid stuff when we were kids. I'm not looking for my pound of flesh here. It's over and done with, as far as I'm concerned."

As he said: "I don't want to beat a dead horse, no pun intended."