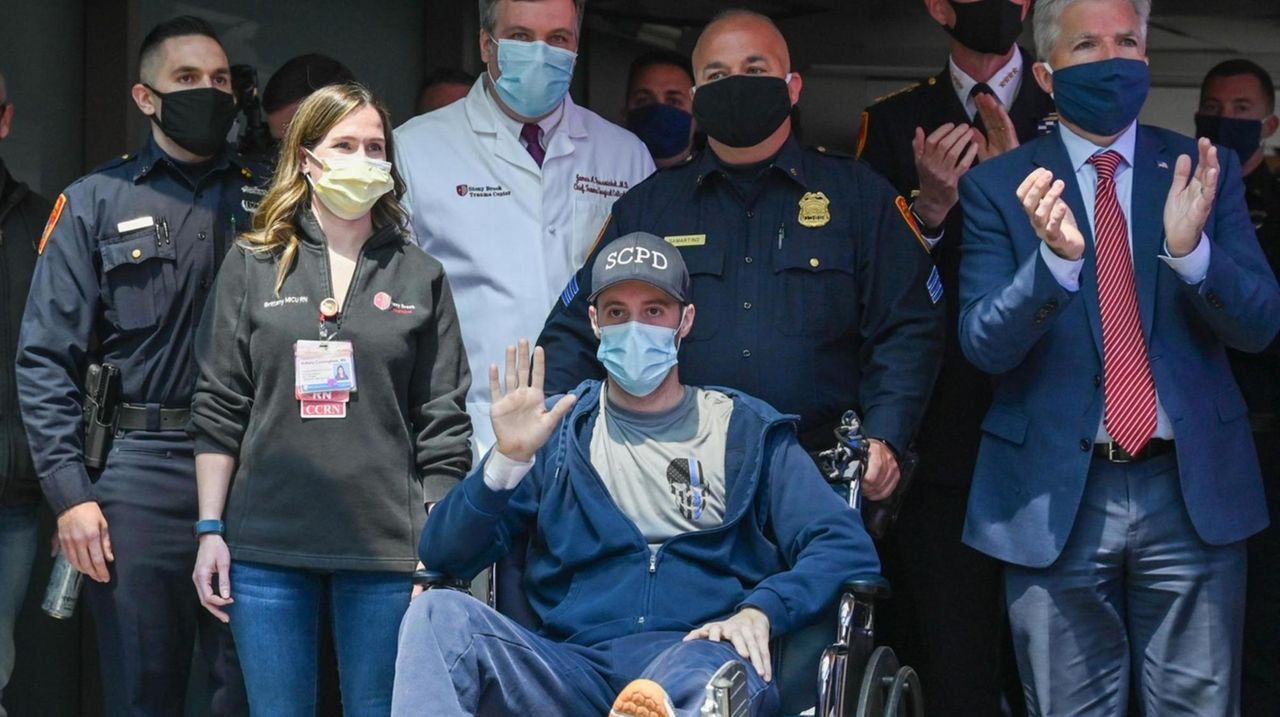 Suffolk County Police Officer Christopher Racioppo was released from the hospital after a stabbing that nearly cost him his life. Throngs of fellow cops celebrated his release. Credit: Howard Schnapp, James Carbone

Drums boomed, bagpipes skirled, motorcycles roared and hundreds of cops and supporters cheered Monday as the police officer who nearly died after he was stabbed by a drunken driving suspect earlier this month was discharged from Stony Brook University Hospital.

Christopher Racioppo, 31, left the hospital after 16 days in a wheelchair pushed by Sgt. Frank Samartino, one of the quick-thinking cops Suffolk Police Commissioner Geraldine Hart and other officials credited with saving his life.

Racioppo lost most of his blood after the near-fatal stabbing in Patchogue on April 10, according to doctors who said he could make a full recovery. Officials who said they feared they would be planning a funeral instead hosted a celebration.

"A lot of nurses and doctors to thank," Racioppo said before he was helped into the white Chevrolet SUV that would take him home, part of a motorcade led by eight Suffolk police motorcycles.

"Seeing him leave this hospital and getting on the road to recovery is really nothing short of a miracle," Bellone said before Racioppo was discharged, praising "the world-class care" Racioppo received from doctors and nurses at Stony Brook and Long Island Community Hospital.

Racioppo did not participate in a news conference held outside the hospital, but he thanked Samartino and the other officers officials said saved his life — Taylor Herbst, Jarrett Hanwright, Christopher Morris and Mike Aulivola — in a statement read by Suffolk Police Benevolent Association official Damon Marro.

"I hope with every passing day and week, he becomes stronger and healthier and will be able to return to the job he put his life on the line for," Hart said.

Officials have also praised Patchogue resident Guillermo Sandoval, a former Marine who provided aid at the scene, and Frank "J.R." Recupero, a retired NYPD detective who detained the suspect until police arrived. Recupero was in the crowd that cheered Racioppo when he was released.

Racioppo was in a marked patrol car on April 10 when he saw a 1999 Mercedes-Benz driving south erratically with no headlights on South Ocean Avenue in Patchogue, police said. When Racioppo attempted to stop the vehicle, the suspect, Jonathan Nunez of Centereach, allegedly sped off in the Mercedes and crashed into a 2004 Nissan.

Officials said Racioppo followed Nunez into a nearby yard, where the suspect stabbed the officer in the left thigh, cutting the femoral artery and a vein. Dr. James Vosswinkel, the head of trauma at the hospital and the Suffolk police chief consulting surgeon and medical director, said Racioppo suffered severe shock and would have died without the actions of the responding officers and the bystanders.

"What was done at the scene was miraculous," Vosswinkel said.

Suffolk PBA president Noel DiGerolamo said the injuries Racioppo suffered are a stark reminder of the dangers cops face every day they go to work. He pointed to the hundreds of police officers outside the hospital who came to support their colleague.

"All of these hundreds of people here right now, they would do the same thing Chris did in a split second tomorrow," DiGerolamo said. "I thank each and every one of you for the sacrifices you make."

Nunez was charged with aggravated assault upon a police officer with a deadly weapon, driving while intoxicated and resisting arrest. He pleaded not guilty at his virtual arraignment on April 13 and was ordered held without bail.

Suffolk Police Chief of Department Stuart Cameron was among those who called Racioppo’s discharge a miracle, pointing out that the officer’s life was saved by a "fragile chain of events that had to transpire for Chris to recover."

"Any break in that chain would have potentially resulted in Chris not being here today," Cameron said.

Stabbed Suffolk officer no longer in critical condition, officials sayOfficer Christopher Racioppo has been upgraded to fair condition, according to Dr. James Vosswinkel, the head of trauma at the hospital and the Suffolk County Police Department's chief consulting surgeon and medical director. Precinct supervisor: 'We thought we had lost' cop after suspect stabbed himSuffolk police Sgt. Frank Samartino said he decided to transport Officer Christopher Racioppo to a hospital in a patrol car because the three-year police veteran looked like he was bleeding to death. Quick thinking helped save Suffolk cop after stabbing, SCPD saysA Centereach man is in custody on multiple charges after police said he stabbed the Suffolk police officer, who is in critical but stable condition with a severe leg wound.