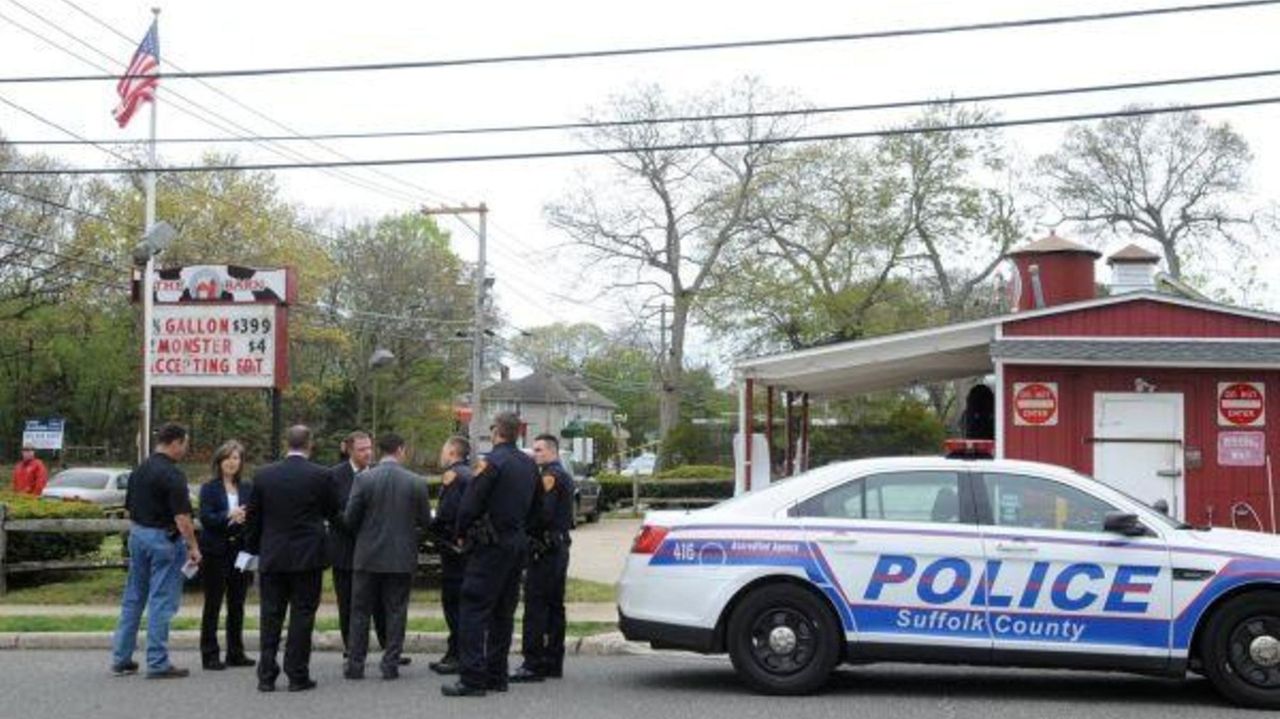 Suffolk County said on Sunday, April 30, 2017, that a convenience store in Lake Ronkonkoma was held up by a man with a knife -- a robbery that police said they believe is the latest in a series of knifepoint robberies across Long Island since February. Suffolk County police Major Case Unit detectives were at The Barn on Hawkins Avenue in Lake Ronkonkoma, which had been robbed at knifepoint at 11:53 a.m., Assistant Police Commissioner Justin Meyers said in an emailed statement.  Credit: James Carbone

A knife-wielding robber struck a Lake Ronkonkoma convenience store Sunday in what police believe is the 17th holdup in a series of similar crimes committed by the same suspect across Long Island since February.

The suspect, who escaped with an undisclosed amount of cash, wore a hood and had his face covered, police said. No injuries were reported. Suffolk County police Major Case Unit detectives are investigating, police said, and are “in the process of obtaining video” of the heist, police said.

The serial knifepoint robber is suspected of hitting 17 stores — 10 in Nassau and seven in Suffolk. Two were attempted robberies in the spree began on Feb. 13.

With his face covered consistently with either a mask or a scarf, the robber has largely struck chain ice cream shops and sandwich stores. No one has been injured in any of the heists, but cops have cautioned that the suspect, who has alternately produced a machete or large kitchen knife, is extremely dangerous and store clerks should hand over cash without argument.

Suffolk Police Commissioner Timothy Sini has said the robber may be a drug addict, stealing to support his habit.

The robber has eluded authorities for more than two months, even as police have stepped up patrols at similar stores in both Nassau and Suffolk and added special units.

Much of the surveillance footage captured of the suspect has been of poor quality, police said. The thief has primarily struck at night, but in at least two instances, including Sunday, has committed heists during daylight hours.

Before Sunday, the most recent holdup occurred shortly before 9 p.m. on April 19 at a Baskin-Robbins on Sunrise Highway in Bohemia, when a man with a knife walked in, demanded and received cash from an employee, and then fled, police said.

Sunday, The Barn was cordoned off with yellow crime scene tape and detectives canvassed the area for evidence. Another detective stood on a ladder and examined a surveillance camera.

A man who identified himself as a district manager, but would not provide his name, said: “They will get him. What goes around comes around. . . . The clerk is fine, thank God.”

He said people who live in the area are “hardworking people who come in to buy milk, bread, juice and cigarettes. . . . Now we have to deal with this lowlife,” he said.