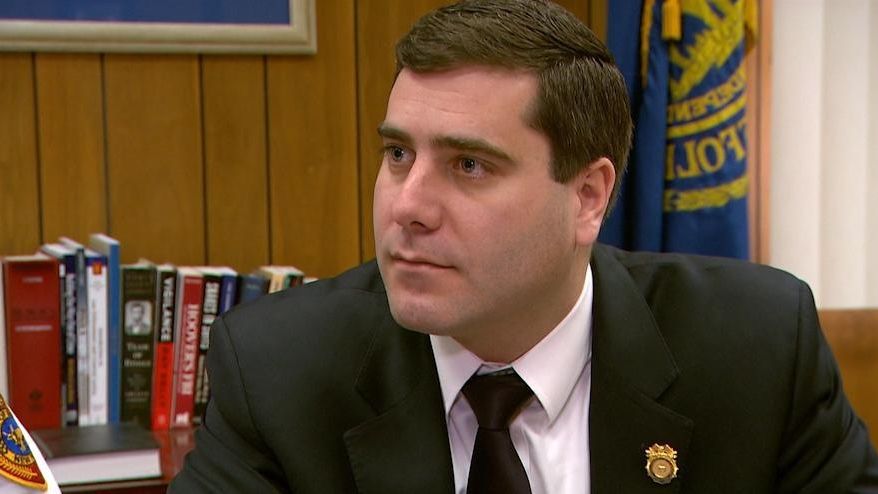 On Thursday, Feb. 2, 2017, Suffolk County Police commissioner Tim Sini talked about a pilot program that will be starting in the Sixth Precinct to combat drug overdose deaths. The program will feature a dedicated Field Intelligence Officer following up on all drug overdoses, including Narcan saves, with the focus on identifying the drug dealers. Credit: News 12 Long Island

Suffolk police are hoping that overdose victims’ near-death experiences could persuade them to share the identity of the dealer who sold them the toxic drug.

The program, announced Thursday, calls for the addition of an officer in the Sixth Precinct, where most overdoses took place in Suffolk County last year. The goal is for that officer to work with police in the field, talking to overdose victims to target dealers who knowingly distribute drugs that may lead to fatal overdoses.

“There are certain drug dealers that are selling opioids at a higher level that are causing overdoses and even a smaller number that know they’re doing it and continue to do it,” Chief of Department Stuart Cameron said in an interview Thursday.

“They know that they’re causing overdoses and, in many cases, fatal overdoses, and yet they continue to sell drugs. But they know they’re killing people. Those are the ones we’re really trying to target,” Cameron said.

Suffolk County Police Commissioner Timothy Sini said he hopes the program will help stem the skyrocketing number of fatal drug overdoses which will most likely exceed 300 for 2016, the most ever for Suffolk.

But critics of the program worry it could backfire on the overdose victims, and say that there are legal issues the department has not anticipated.

Eugene O’Donnell, a John Jay College of Criminal Justice lecturer who previously worked as an NYPD officer and a prosecutor at both the Queens and Brooklyn district attorney’s offices, was concerned about how the procedure would be carried out.

“There’s issues about whether this would trigger Miranda warnings, whether the person is entitled to counsel, who can guarantee that a user will just be treated as a user, when does that person cross the line to being an accessory?” O’Donnell said.

Sini said there were a “variety of legal tools” that would protect the overdose victims. They could partner with the Suffolk County district attorney’s office to offer immunity or give what is known as a “Queen for a Day” agreement, where victims can provide information to prosecutors and investigators and not have their words held against them in court.

“These overdose victims aren’t even in custody. They can refuse to talk to the detective or they can ask for their presence of counsel,” Sini said. “That doesn’t make sense. We’re only trying to save lives.”

The Suffolk district attorney’s office declined to comment on the program. But Assistant Police Commissioner Justin Meyers said, “We have spoken with the DA’s office and they are excited about the prospect of this pilot program.”

Suffolk officers have been able to save overdose victims by using Narcan, a nasal spray that blocks the effects of opioids. The Sixth Precinct also had the largest number of Narcan saves among all precincts last year with 211, officials said. The next largest was the Seventh, with 149 saves, officials said.

“They just died. And they were just revived by a police officer,” Sini said of victims saved by Narcan. “They’ve hit rock bottom and the hope is that we can tap into that reality.”

The program, which is voluntary, has been mulled over by the department’s executive staffers for months as they tried to find new ways to battle the opioid epidemic, Sini said.

The Sixth Precinct in Selden was the ideal place to start, with 465 fatal and nonfatal overdoses in 2016 within its territory. The Seventh Precinct in Shirley saw 335, Sini said.

Dr. Jeffrey Reynolds, president and CEO of the Family and Children’s Association, which runs several treatment centers on Long Island, said he worries the effort to get overdose victims to cooperate may make some think twice before calling for help.

“I want to put the dealers in jail as much as anyone, but it depends on the officer,” Reynolds said. “Can they navigate that balance from getting good and actionable information with the need to make sure the questioning is not so aggressive that it has a chilling effect on people’s willingness to pick up the phone and call 911?”

“The intent and spirit of this program is not to charge overdose victims with criminal possession of a controlled substance,” Sini said. “Rather, the intent and spirit is to gather info so we can target and address drug dealers killing people in our communities.”

David Besso, a Bay Shore defense attorney who administers the county’s “18-b” program, which provides attorneys to those who can’t afford legal help, echoed O’Donnell’s concerns.

“The ends don’t justify the means,” Besso said. “Everyone wants to get drug dealers off the streets, but dealing with and using them [overdose victims] . . . as foils and sources of information, which could endanger them and possibly implicate them in criminal activity, is not the way to do it.”