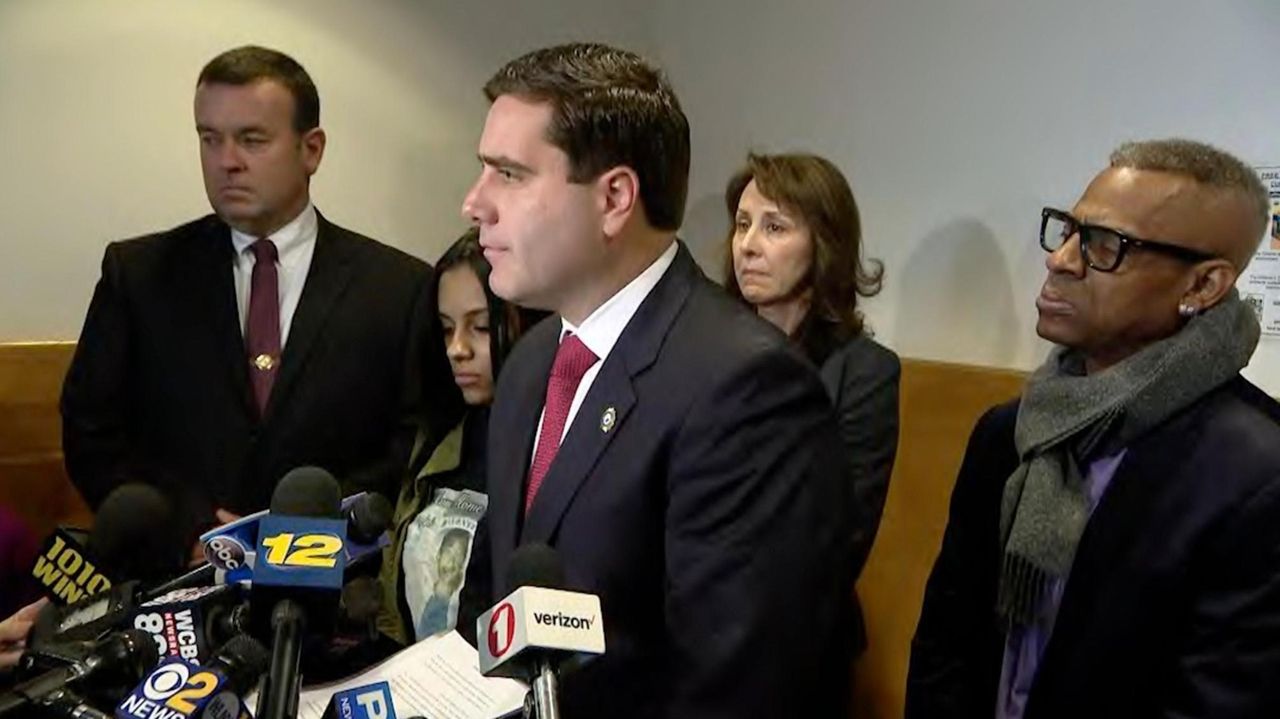 The woman who ran over and killed anti-gang activist Evelyn Rodriguez on the second anniversary of her daughter's slaying was charged Friday with criminally negligent homicide and with crimes related to the destruction and theft of a memorial to Rodriguez's daughter, prosecutors said.

AnnMarie Drago, 58, of Patchogue, pleaded not guilty to the three-count indictment, which also charged her with criminal mischief and petit larceny. She faces a maximum of 1 1/3 to 4 years in prison if convicted of the top count. State Supreme Court Justice Fernando Camacho agreed to both sides' request to let Drago remain free with no bail, a decision that upset some friends of the Rodriguez family.

Rodriguez, 50, was fatally struck Sept. 14 on a Brentwood cul-de-sac during an argument over the destruction of the sidewalk memorial in honor of her daughter, Kayla Cuevas, 16, and Kayla's friend Nisa Mickens, 15, Assistant District Attorney Marc Lindemann said. The girls are believed to have been killed by MS-13 gang members.

“Justice was served today, in a way,” said Freddy Cuevas, Rodriguez's longtime partner and Kayla’s father, who was there the day Rodriguez was killed. The confrontation and killing were captured on video by News 12 Long Island, which was preparing to cover the memorial that evening.

In court, Drago stood with her hands cuffed behind her back as Lindemann described the events of that day.

Lindemann said Drago was trying to sell her mother's home and felt the memorial — a collection of cards, candles, photos, signs, balloons and an elaborate floral arrangement on a table — would discourage buyers. So, Lindemann said, Drago destroyed it. She stuffed as much of it as she could in a garbage can, popping balloons and smashing vases to make them fit, he said.

A neighbor told Drago that "this was not a good day to do this," and another neighbor alerted Rodriguez to what was happening and she and Cuevas rushed to the scene, Lindemann said.

"Evelyn had no idea she would be joining her daughter that day," he said. 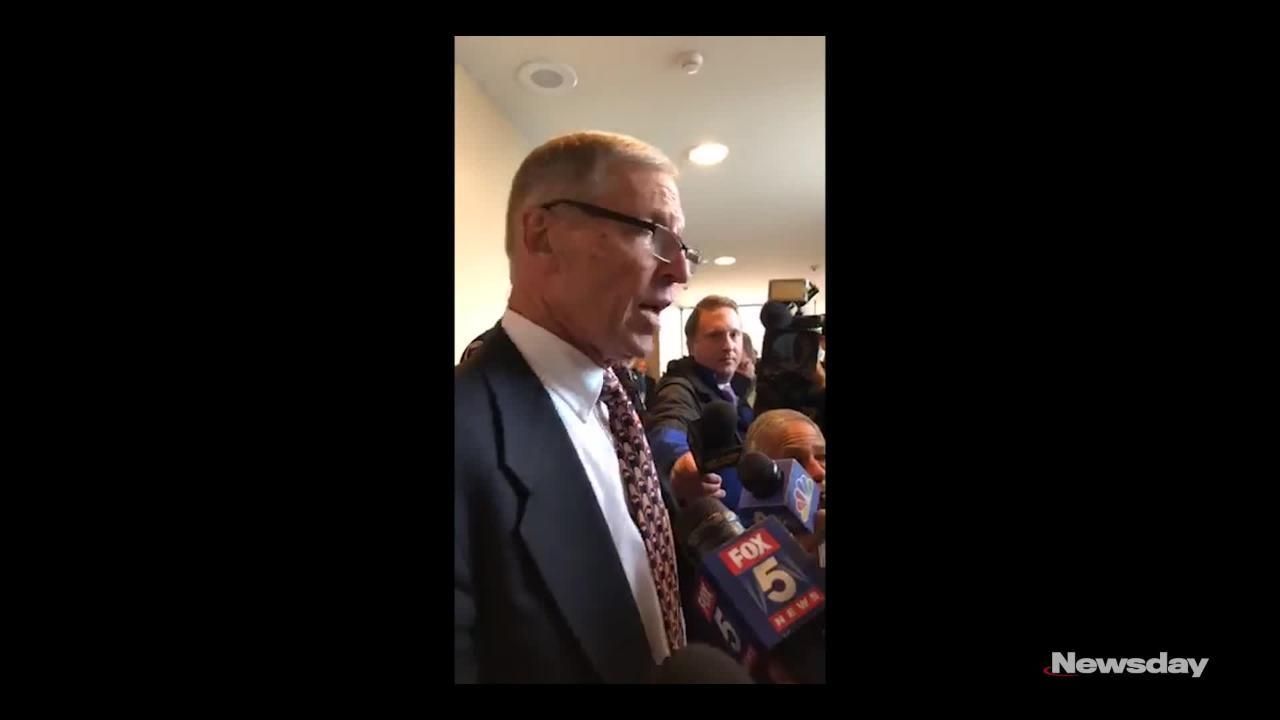 But she accelerated, Lindemann said. The impact knocked Rodriguez down and the Rogue's rear wheel rolled over her body, he said. Drago remained at the scene.

Defense attorney Stephen Kunken of Commack said his client, a registered nurse and a teacher, has cooperated with police, prosecutors and the grand jury. He expressed condolences to the Rodriguez family on behalf of his client but said his client's "actions that day were neither intentional nor reckless," and he expects her to be found not guilty of any crimes.

"I don’t know if she meant it," she said. "I hope that she did. But sorry won’t bring my mother back.”

"I can tell you literally no stone was left unturned," Sini said.

Friends who were present said prosecutors should have asked Camacho to hold Drago on bail.

"We want her incarcerated, and to stay there," said Liz Cordero.

Barbara Medina, a victim’s rights advocate who befriended Rodriguez after her daughter was killed, said she attended Drago’s arraignment with Kelsey Cuevas.

Medina, who organized a memorial for Rodriguez and attended a protest outside a police precinct calling for criminal charges against Drago, described herself as feeling a “sense of relief” that charges were lodged against Drago. But she said she and Kelsey Cuevas were left with a “sour note” after Drago was released.

“I think that’s when my stomach turned,” Medina said. “It was just nauseating when she got uncuffed. Evelyn’s daughter clawed me with her nails…she was trying to compose herself.”

Sini noted that the purpose of bail is only to ensure a defendant returns to court, and Drago was no flight risk.

Rep. Peter King (R-Seaford), who worked with Rodriguez as she fought against gang violence and helped arrange her meetings with President Donald Trump, praised Sini and the grand jury upon learning of the indictment.

"Evelyn Rodriguez will now, in effect, get her day in court," King said. “What happened to her is terrible. This is how it should be resolved. Hopefully, Evelyn will now see the justice she's entitled to."

King, whose re-election campaign filmed an ad featuring Rodriguez days before she died, said that while he wasn’t privy to all of the evidence reviewed by the grand jury, the driver’s actions were “morally wrong.” The ad later aired at the insistence of Rodriguez's family.

"I felt from the start that it was morally wrong, and now the grand jury concluded that it was criminally wrong," King said. "I give DA Sini tremendous credit for doing this in a thoughtful way, not rushing this, doing a very thorough investigation."

“Evelyn Rodriguez was an incredible, fierce advocate for her daughter’s memory and for all the kids in her community,” Bellone said. “It’s still unimaginable what happened and I just pray for her family.”

At a vigil Friday night on Ray Court, where Rodriguez died, about two dozen friends and supporters lighted candles where "R.I.P. Kayla and Evelyn" and a broken heart was painted on a sidewalk.

Several voiced displeasure over Drago being free over the holidays, while Rodriguez' family just faced Thanksgiving without the Evelyn and Kayla.

"I can't even imagine it — that's how much it hurts," said Noel Vega, a family friend from Brentwood. "We came here today to show she's not forgotten and we continue to seek justice."

His daughter, Adriana Rodriguez, a friend of Kayla's sister Kelsey, said she had started painting RIP for Kayla on the anniversary of her slaying but was interrupted by Evelyn's death. She went back and painted a broken heart where she saw Rodriguez' blood, she said, and painted the sidewalk memorial on Ray Court, which she and others have visited daily.

Friday night, Adriana Rodriguez spoke about Evelyn Rodriguez praying to Kayla every day: "She would tell me stories, just little things, when things would go her way . . . She knew it was Kayla looking out for her."

CORRECTION: The top charge was incorrect in a previous version of this story.

Prosecutors’ account of the events leading to the death of Evelyn Rodriguez:

A few hours before her death, Evelyn Rodriguez and Freddy Cuevas set up a cloth-covered table at the spot where Kayla Cuevas’ body had been found, in front of the home of AnnMarie Drago’s mother on Ray Court. The table was the center of a memorial that included candles, a floral arrangements, photos and balloons, which would be the focus of a candlelight vigil that night.

Prosecutors say Drago was trying to sell her mother’s home and felt the memorial would discourage buyers, so she destroyed it all. She smashed vases and popped balloons so they would fit in a garbage can and put larger items, including the table in the back of her Nissan Rogue.

A neighbor told Drago that “this was not a good day to do this” and alerted Rodriguez to what was happening and she and Cuevas rushed to the scene. There was a confrontation, although prosecutors say Rodriguez and Cuevas had no weapons and made no threats while they demanded their property back. Cuevas warned Drago that if she moved her car she’d hit Rodriguez.

But Drago accelerated, and the impact knocked Rodriguez down and the Rogue’s rear wheel rolled over her body. Drago remained at the scene.

Cops: Mom of slain Brentwood teen struck, killed by carEvelyn Rodriguez, who became a national voice against MS-13 gang violence after her teenage daughter ... Rodriguez hailed as powerful anti-gang advocateThe mother from Brentwood, whose daughter was murdered in 2016, allegedly by MS-13 gang members, helped bring millions of dollars to Long Island to combat the gang she vowed to battle. Family, friends want answers on activist's deathAt a meeting in the Suffolk police's third precinct, frustrated attendees asked for more information about her death and the driver who struck and killed her.