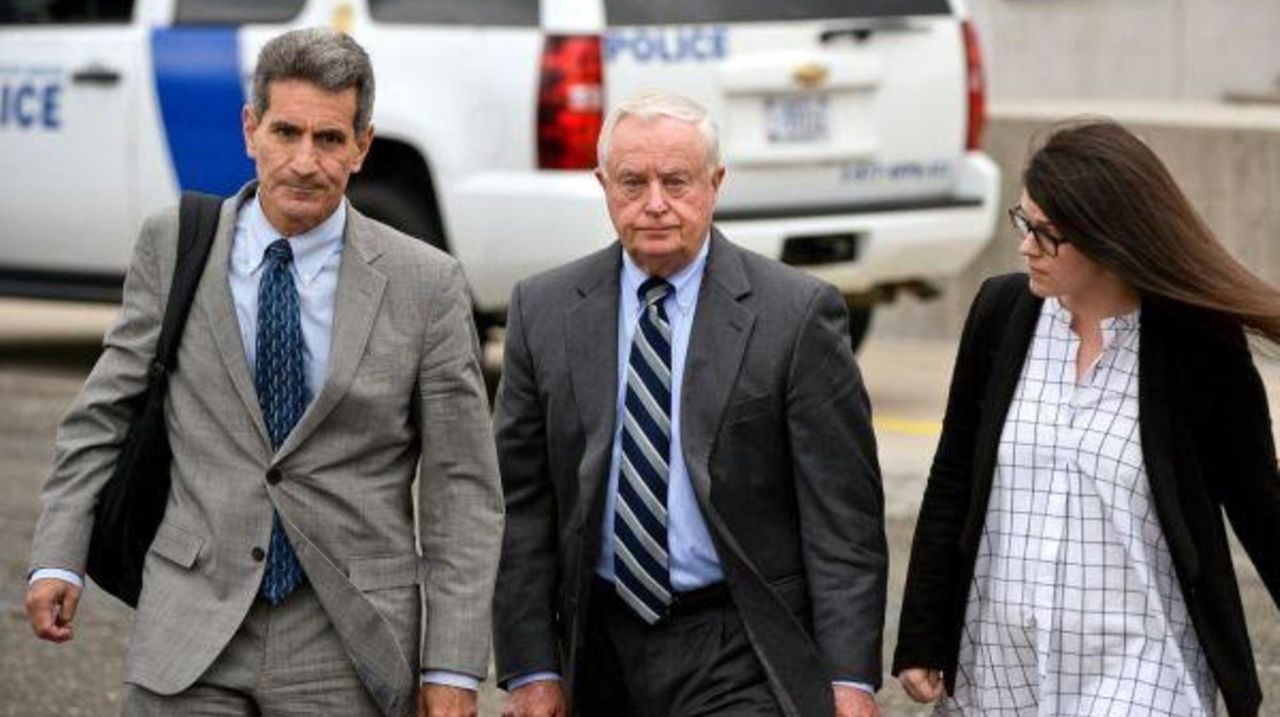 Longtime Suffolk County District Attorney Thomas Spota and one of his chief aides on Wednesday, Oct. 25, 2017, were indicted on federal charges that they were involved in a cover-up of former Suffolk Police Chief James Burke's assault of a suspect in 2012. Spota, a Democrat who was elected in 2001 as a corruption fighter, and Christopher McPartland, the head of the district attorney's political corruption unit, pleaded not guilty at arraignment in Central Islip federal court. Each was released on a $500,000 bond. Credit: News 12 Long Island

Longtime Suffolk County District Attorney Thomas Spota and one of his chief aides have been indicted on federal charges that they were involved in a cover-up of former Suffolk Police Chief James Burke’s assault of a suspect in 2012.

Spota, a Democrat, the top law enforcement officer in the county who was first elected as a corruption fighter, and his aide, Christopher McPartland, who runs the political corruption unit, pleaded not guilty Wednesday at a brief arraignment in U.S. District Court in Central Islip.

Both were released on $500,000 bond. They showed no emotion before the packed courtroom.

Spota, 76, of Mount Sinai, and McPartland, 51, of Northport, along with Burke and other members of the Suffolk County Police Department “had numerous meetings and telephone conversations wherein they discussed the assault,” the victim’s allegations against Burke, and the federal investigation, prosecutors said in a letter to the judge asking for strict bail conditions.

They “agreed to conceal Burke’s role in the assault and to obstruct and attempt to obstruct the federal investigation in order to protect Burke,” prosecutors said in the letter.

Federal prosecutors said the two men were accused of “using intimidation threats and corrupt persuasion to pressure . . . witnesses, including co-conspirators not to cooperate with the federal investigation, to provide false information, including false testimony under oath, and to withhold relevant information from” federal investigators.

Acting U.S. Attorney Bridget M. Rohde said in the letter that Spota and McPartland have “demonstrated their utter contempt for the laws they were charged with upholding.”

The “nature and circumstances of the crimes charged are shocking and appalling as the defendants . . . are alleged to have grossly and outrageously violated their positions of trust and operated in a manner more akin to criminal enterprise than a district attorney’s office,” the letter said.

U.S. District Court Judge Leonard Wexler, at their arraignment, ordered Spota and McPartland not to have contact with each other without their lawyers present in matters of the indictment, and not to contact any witnesses.

The judge said a third party, agreed to by prosecutors and defense attorneys, has to be involved in any joint regular work at the district attorney’s office by Spota and McPartland.

In asking for such conditions, prosecutors argued that the defendants still had considerable influence.

After the hearing, Spota’s attorney, former acting Eastern District Attorney Alan Vinegrad, disputed prosecutors’ assertions. “Tom Spota committed no crime,” Vinegrad said outside the federal court. “In fact, for many years of a very long and distinguished career, Tom has worked hard to investigate and prosecute crime and deliver justice to the residents of Suffolk County.”

Vinegrad added: “Tom categorically denies the government’s charges and looks forward to vindicating himself in court.”

After that statement, he and Spota left without comment.

McPartland’s attorney, Lawrence Krantz, said in a statement afterward: “Chris McPartland has always been an honest and dedicated public servant. He vehemently denies the charges and asserts his innocence. He looks forward to his day in court.

Spota would not comment on whether he will resign.

In addition to the $500,000 bond, secured by their homes, Spota and McPartland were restricted to traveling within the continental United States.

Eastern District Assistant United States Attorneys Lara Treinis Gatz and John Durham said in the letter that the strength of the government’s case “is overwhelming and consists of dozens of witnesses . . . fully corroborated by numerous sources of evidence . . . including telephone call detail records, cell site records, photographs, financial records . . . and other documentary evidence.”

An attorney for Burke could not be reached for comment.

If convicted they each would face up to 20 years in prison, but would most probably receive less.

Newsday has reported that federal prosecutors and investigators had been probing whether Spota and McPartland took part in the cover-up of the assault by Burke on Christopher Loeb, who stole a duffel bag from the chief’s department SUV, parked in front of Burke’s St. James home in December 2012. The duffel bag reportedly contained a gun belt, cigars, sex toys and adult pornography, officials said. Loeb is not named in the indictment.

“Of all the problems that have existed in Suffolk County over the decades, what seems to have broken the back of Suffolk law enforcement was a kid who didn’t want to take a beating from a cop,” said Bruce Barket of Garden City, Loeb’s attorney.

“It’s an unfortunate, sad thing, but a very good occurrence for the county,” Barket said. “It’s good for law enforcement. The old guard had to go.”

He said Spota should resign immediately, and that there is no point to sticking around for the last two months of his term. “He needs to go,” Barket said.

Spota, who is the longest-serving district attorney in county history, announced in May he was not planning to run for a fifth term in November.

In announcing his decision, Spota said the “deciding factor . . . is that life is too short [especially at my age] and it’s time to spend quality time with my wife, children and grandchildren, with two more on the way.”

Suffolk Democratic Party chairman Rich Schaffer said Spota should be allowed to serve out his term because “it’s an accusation” and he has not been found guilty.

“It’s sad for him and his family, that they have to go through this at the end of his career,” Schaffer said. “And we’ll give him the opportunity to defend himself in the court of law.”

Burke, a longtime Spota protégé and a close colleague and friend of McPartland’s, is serving a 46-month federal sentence for violating in 2012 the civil rights of Loeb after pleading guilty to assaulting him, and then engaging in obstruction of justice by orchestrating a cover-up of the attack.

In addition to the Burke-Loeb case, Newsday has reported that the comprehensive federal scrutiny of Spota’s office has included whether there was anything unlawful in the handling of the investigation into the shooting of Huntington Station taxi driver Thomas Moroughan by an off-duty Nassau County police officer; the circumstances under which former Suffolk County Executive Steve Levy gave up a $4.1-million-dollar campaign chest to the district attorney’s office, and also agreed not to run for re-election; the legality of a wiretap placed on the phone of former Suffolk detective John Oliva; the resolution of the criminal case against well-known Suffolk criminal lawyer Robert Macedonio; the office’s distribution of asset-forfeiture money; and the investigation into a number of political associates of Suffolk County Executive Steve Bellone.