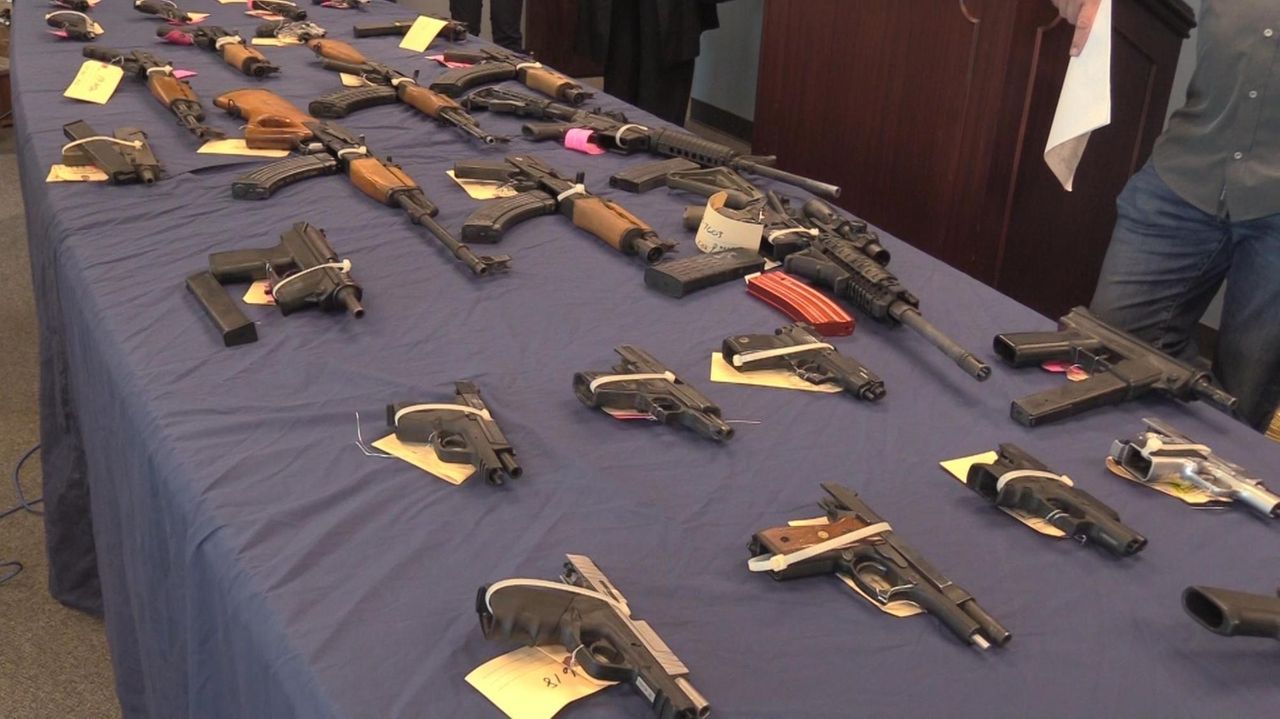 Suffolk District Attorney Timothy Sini spoke Tuesday in Hauppauge about 14 people indicted on charges in connection with an illegal gun trafficking operation based in the county. Credit: James Carbone

Fourteen people alleged to be Bloods gang members or associates have been indicted on charges they were part of an illegal gun trafficking operation headquartered in Suffolk County, officials announced Tuesday.

Suffolk County District Attorney Timothy Sini said 73 illegal firearms were recovered as part of the yearlong investigation, including 13 assault rifles, among them AR-15s and AK-47s. Forty-eight of the guns were loaded at the time they were seized and six had their serial numbers destroyed, rendering them untraceable.

The weapons were allegedly illegally smuggled from southern states along the so-called “iron pipeline” that carries illegal guns from states like Virginia, North Carolina and Georgia with more lax gun laws to northern states where gun restrictions abound.

“This was a large operation of gang members and associates who were retrieving guns from the iron pipeline through straw purchasers and smuggling weapons from other states into the state of New York,” Sini said during a news conference at his Hauppauge office with Suffolk police and ATF officials.

Ten of the 14 defendants have been arrested and arraigned on charges including felony charges of criminal sale of a firearm, which are contained in a 127-count indictment, officials said. Warrants have been issued for the remaining four defendants.

The investigation began in September 2018 and included physical and electronic surveillance of the subjects and court-approved wiretapping, Sini said.

Among those indicted, nine are alleged to be known Bloods gang members, including Leroy Jones, 31, of Deer Park; Curtis Bostic, 28, of Hempstead; and Jasmine Sexton, 37, of Huntington Station.

Sexton coordinated with a relative, Damar Parler, 35, of Lynchburg, Virginia, who would purchase the firearms through a network of straw buyers in Virginia, Sini said.

Sexton also worked with Bostic to sell the firearms, authorities said, and the two used Jones as a runner to pick up the firearms and deliver them to the buyer to complete the sales.

"Jones would act as runner to deliver the weapons to local buyers," Sini said. "Unfortunately for them, some of those local buyers were undercover police officers."

On Sept. 14, law enforcement officers in Nassau County pulled over a 2014 Ford Explorer owned by another defendant, Tameeka Stevens, 35, of Lynchburg, Virginia. Parler, her boyfriend, was also in the vehicle, along with a child, Sini said.

Two firearms were recovered from the vehicle. One of the guns was loaded.

Jones' attorney, Joseph Hanshe of Sayville, said his client, who has been diagnosed with schizophrenia, bipolar and post-traumatic stress disorders, was entrapped by police. He denied that his client is a Bloods gang member, but said he has struggled with drug addiction.

"He was entrapped," said Hanshe. "There's no question about it."

Jones was attending a drug treatment program when another man — who Hanshe believes was a confidential informant — introduced him to a cigar-smoking man who "begged" Jones to help him get a gun to protect his family, Hanshe said.

The cigar smoker was an undercover police officer, Hanshe said, who gave Jones the money to purchase the first gun. When he asked for Jones to get him more guns, Hansche said his client asked him if he was a cop and he denied it. Hansche said his client then asked if the gun purchases were legal and the man he believes is an undercover cop told him: "Oh, we're just getting these guns off the street."

Brown’s attorney, Robert Macedonio of Central Islip, said: “Scott Brown is not a member of the Bloods, nor is he trying to become a member of the bloods. He denies the allegations. It makes great press to accuse people of being gang members when you’re trying to disprove a negative.”

Macedonio, whose partner represents Stevens, said: “Miss Stevens is a mother of three children, with no prior criminal record. She denies the allegations.”

Pascal’s lawyer, Christopher Cassar, said Tuesday night, “The government is trying to paint my client as a gang member. He’s definitely not a gang member.”

Cassar, whose law firm is based in Huntington, also said Pascal will be exonerated of the charges against him. “When the facts come out, my client will be proven innocent of these charges. He did not sell or possess any guns.”

Attorneys for the other defendants either did not respond to messages or could not be reached.