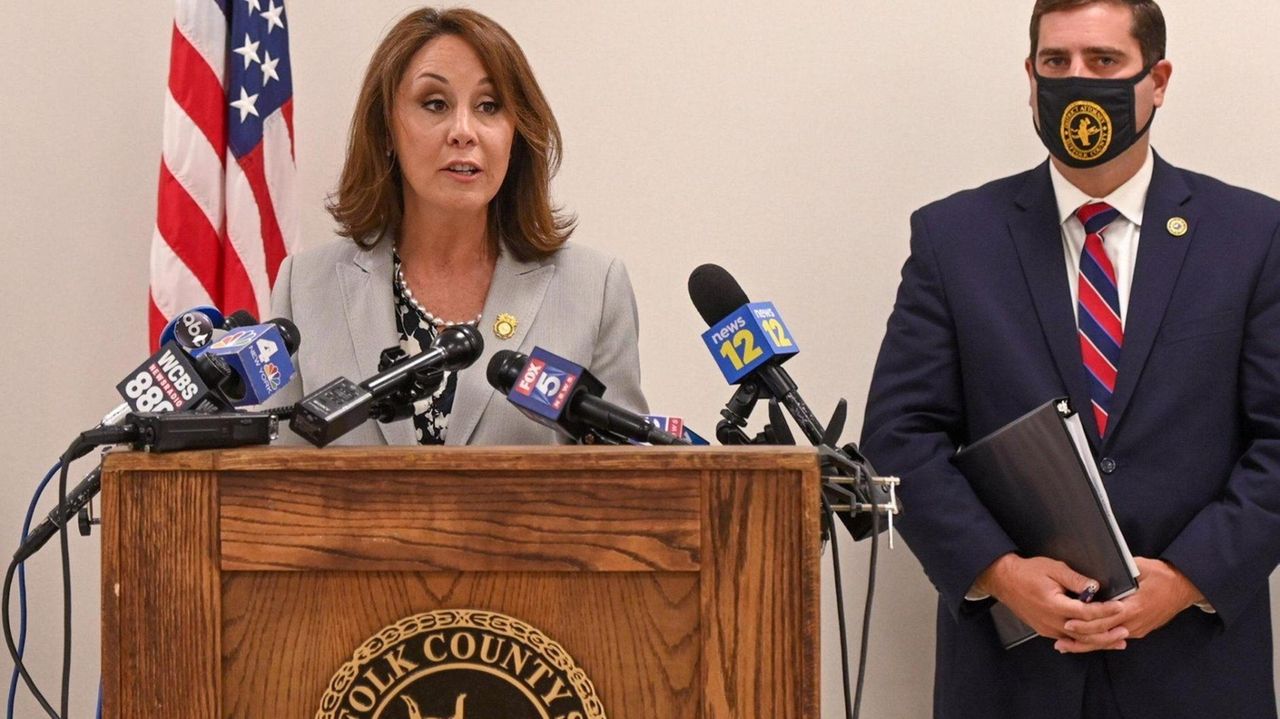 Authorities on Wednesday said more than $1 million was stolen from financial institutions in a nationwide synthetic identity fraud scheme that involved the theft of Social Security numbers from children, immigrants and the elderly. 13 people have been charged; the majority of the defendants are from Long Island. Here is Newsday's Cecilia Dowd. Credit: Newsday / Raychel Brightman; Photo Credit: Getty Images/iStock; Suffolk County District Attorney’s office

A complex scheme that netted more than $1 million after thieves created about 20 new identities with stolen information and used them in Suffolk County to get loans and other credit began unraveling after a single phone call to police, authorities said Wednesday.

Suffolk Police Commissioner Geraldine Hart said the investigation her department started in August 2018 -- and grew to include local prosecutors, federal agencies and California authorities -- began with a phone call from a local bank employee with concerns about a borrower with about $20,000 in unpaid debt.

Hart said a Suffolk detective found that while the borrower used a legitimate Social Security number, it belonged to a teenager in Ohio, not the 54-year-old man who took out the loan.

The detective then reached out to other financial institutions and found similar instances of synthetic identity fraud, Hart said.

Authorities said the alleged scammers used Social Security numbers stolen from people not likely to check their credit histories, including children as young as 5, recent immigrants, the elderly, the incarcerated and even the dead, to create synthetic — or fraudulent — new identities.

The scammers used their own names and dates of birth along with the stolen Social Security numbers and random Suffolk addresses "to wrack up debt and defraud financial institutions," Sini said.

He called the indictment "historic" and said the prosecution was the first of its kind in Suffolk to target a new kind of criminal scheme.

Sini said while local losses topped $1 million dollars, authorities believe the same schemers amassed a credit limit of hundreds of millions of dollars across the country.

Authorities said that in order to make the ploy work, the scammers took steps to make the new identities look legitimate that included applying for phone accounts, library cards and rewards cards.

One of the schemers also would use sophisticated software to insert the synthetic identities into public databases that financial institutions use to verify information, law enforcement officials said.

From there, the schemers began fraudulently building credit for the new identities, including by adding them on as authorized users on the credit card accounts of real people, authorities said.

The scam’s alleged mastermind, Adam D. Arena, 43, of Corona, California, then created shell corporations that falsely reported the made-up identities to credit reporting agencies as if they were corporation customers to boost the credit ratings of the fake identities, law enforcement officials said.

Arena also allegedly backdated the information to try to make it look like the fake individuals had good credit histories for years.

Three corporations the California man owns face charges of acting with him to carry out money laundering, authorities said.

With fake credit histories established, the scheme's participants allegedly used the synthetic identities to get loans that weren't repaid and to max credit cards — what authorities said is known as a credit "bust out."

Court records show Arena pleaded not guilty to the indictment, which includes grand larceny and money laundering among the charges against him, after his February arrest. He is scheduled for a conference in Suffolk court in early October.

The Suffolk attorney who is listed in court records as Arena's appointed lawyer couldn't be reached at his office Wednesday.

Another of the defendants, Tremayne Smith, 44, of Mastic, appeared in a Suffolk court for an arraignment Wednesday on multiple charges that included grand larceny and falsifying business records.

Smith's appointed attorney, Daniel Sullivan, said while leaving court with his client that the man had pleaded not guilty, was put on supervised release and would return to court next month.

Authorities said other defendants, who all face grand larceny charges, were arraigned previously and that they're still seeking to arrest two more suspects.