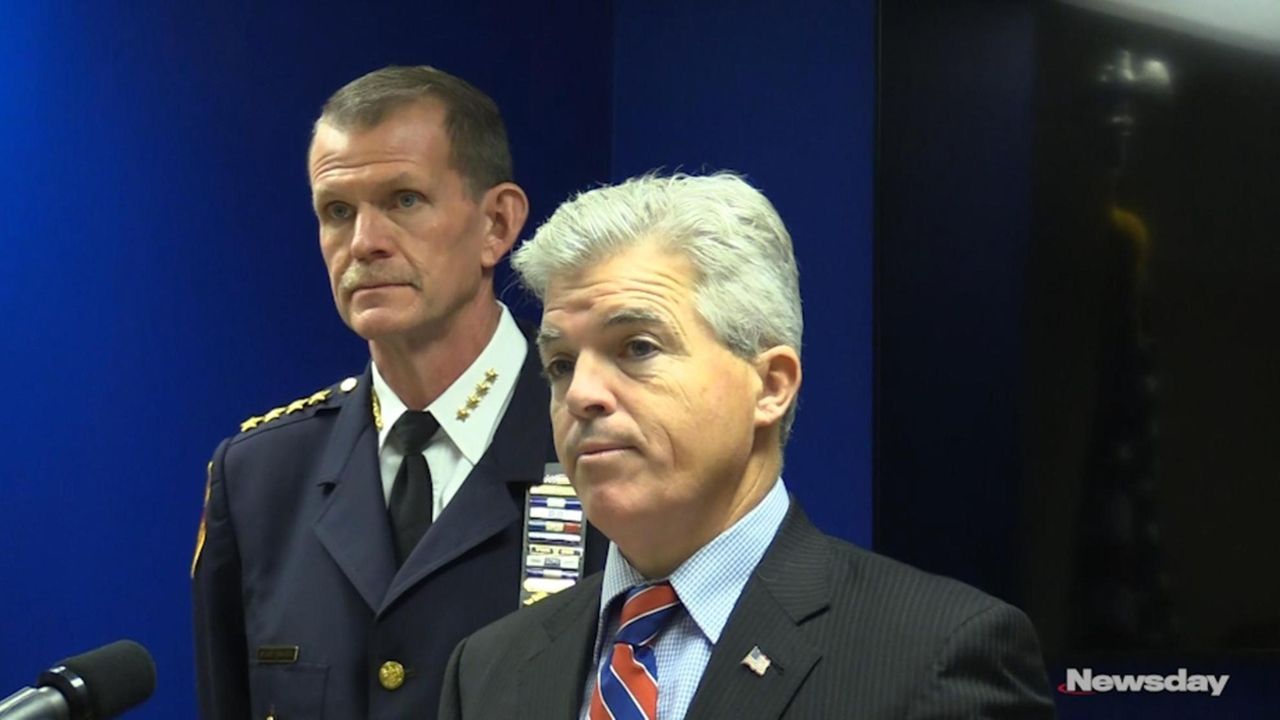 Crime decreased to historic lows across Long Island over the past year, including a dramatic drop in the number of killings attributed to MS-13 gang violence, police reported.

Four of the homicides recorded on the Island in 2018 appear to be connected to MS-13, compared to the 14 killings — eight in Nassau and six in Suffolk — that were the work of the street gang in 2017, police said.

Suffolk County Police Commissioner Geraldine Hart said the decreases in crime this year were due to the department’s concentration on data and intelligence, and using that information to more efficiently deploy officers and specialty teams to areas where crimes are likely to happen or have already occurred.

She also credited the department’s collaboration with federal law enforcement and its efforts in building stronger community relationships, pointing to the hiring of a part-time civilian liaison to increase outreach to the county’s Latino residents.

“The lion’s share of the credit goes to the men and women of the department, who are taking every opportunity to partner with our communities,” Hart, who became commissioner in April, said in an interview.

Nassau Police Commissioner Patrick Ryder was unavailable for an interview to discuss crime statistics because he was planning a news conference in early January to publicly announce the numbers, Det. Lt. Richard LeBrun, a department spokesman, said.

Two of the Nassau killings this year were actually committed in 2017 but the bodies were discovered in 2018 and are recorded in this year’s homicide statistics, LeBrun said. Three of the 2018 killings were attributed to gang violence, including the two that were committed in 2017, which are connected to MS-13, police said.

The Dec. 18 fatal shooting of Harold B. Sermeno, 17, whose body was found behind the Five Towns Community Center in Lawrence, appears to be connected to MS-13, according to an NYPD official. LeBrun declined to comment on the investigation.

Eight of Nassau’s 2018 homicides were the result of gunshot injuries, six were stabbings and two were from blunt force trauma, police said.

Two of Suffolk’s homicides this year occurred in previous years, police said, including a 2016 killing. Only one homicide is linked to MS-13 violence, Hart said. In April, the remains of Ceasar Rivera, 29, who disappeared in October 2015, were found by the FBI in Babylon Village. Hart said police believe he was killed in 2015.

Two other 2018 homicides have a possible gang connection, but not to MS-13, Hart said.

Ten of Suffolk’s 21 homicides were caused by gunshot wounds and four were stabbings while two victims were killed by assailants using their hands and one through blunt force trauma, police reported. Four others were categorized as “homicidal violence,” police said.

In Nassau, total crime is down 6.3 percent this year, with 24,264 crimes reported through Dec. 26, compared with the 25,909 reported through the end of 2017, according to department statistics.

Suffolk police recorded decreases in all crime categories in 2018 through Dec. 25, with both violent crime and property crime down 11.9 percent this year when it recorded a total of 16,180 compared to 18,359 in 2017, according to statistics provided by the department. Violent crime alone dropped 22.5 percent.

Hart attributed the decrease in violence to the department’s use of wiretaps to target gangs and nacotics traffickers and search warrants, which are up 207 percent over the last three years. This year, 276 search warrants were issued compared with 90 in 2015, Hart said.

The crime decreases on Long Island mirror the national trend of decreasing crime. The Brennan Center for Justice at NYU’s School of Law forecasts crime in the country’s 30 largest cities will fall in 2018, according to a late December analysis.

The overall crime rate in the 30 largest cities, including New York City, in 2018 is estimated to decline slightly from the previous year, falling by 1.8 percent, a figure that will represent the lowest since at least 1990, the analysis shows.

The murder rate in the 30 largest cities is estimated to decline by nearly 6 percent, according to the report, with decreases in the number of homicides even in some of the most violent big American cities such as Baltimore and Chicago.

Joseph Giacalone, an adjunct professor at John Jay College of Criminal Justice in Manhattan and a retired NYPD sergeant, said the investment in technology such as license plate readers and other video surveillance has served as a major factor in crime decreases on Long Island.

In the past, a single serial robber could drive up the numbers in a crime category, but with the proliferation of cameras, they generally are apprehended a lot sooner, Giacalone said.

Police should be applauded for making inroads against MS-13, but they must remain vigilant, he said.

“One thing in policing, you can never really take a victory lap,” Giacalone said. “You’re always one incident away from being the focus of the community saying, ‘what are you doing here?’ ”

Port Jefferson Station housing gives former marine a home and a chance at 'serenity'
LIers could get hit with $35 toll driving in Manhattan
Can vaccine holdouts on Long Island be swayed?
'Moulin Rouge! The Musical' sashays home with 10 Tonys
CDC director: Booster shots were expanded 'to stay ahead of the virus'
3:52
Gabby Petito's father: 'Her nature was always to smile'
Didn’t find what you were looking for?