Tayawon Anderson, 20, of Bayport, is led from of the Third Precinct in Bay Shore on Wednesday, Feb. 21, 2018, after Suffolk County police said he stole a police vehicle the previous day. Credit: James Carbone

A Bayport man charged with stealing the marked Suffolk County police car of the officer who was chasing him on foot was arraigned Wednesday.

Tayawon Anderson, 20, of Terrace Road, who was identified by authorities as a Crips gang member, was arrested after he crashed the police car Tuesday in a wooded area off the Sagtikos State Parkway in Bay Shore, police said.

He pleaded not guilty to charges of third-degree grand larceny and first-degree reckless endangerment and was held on bail of $75,000 cash or $100,000 bond at First District Court in Central Islip.

Authorities said Anderson hopped into the still-running car and took off. But his attorney, Christopher M. Gioe of Hauppague, said after his client’s arraignment: “He maintains his innocence with respect to the charges, and he plans on fighting the charges.” 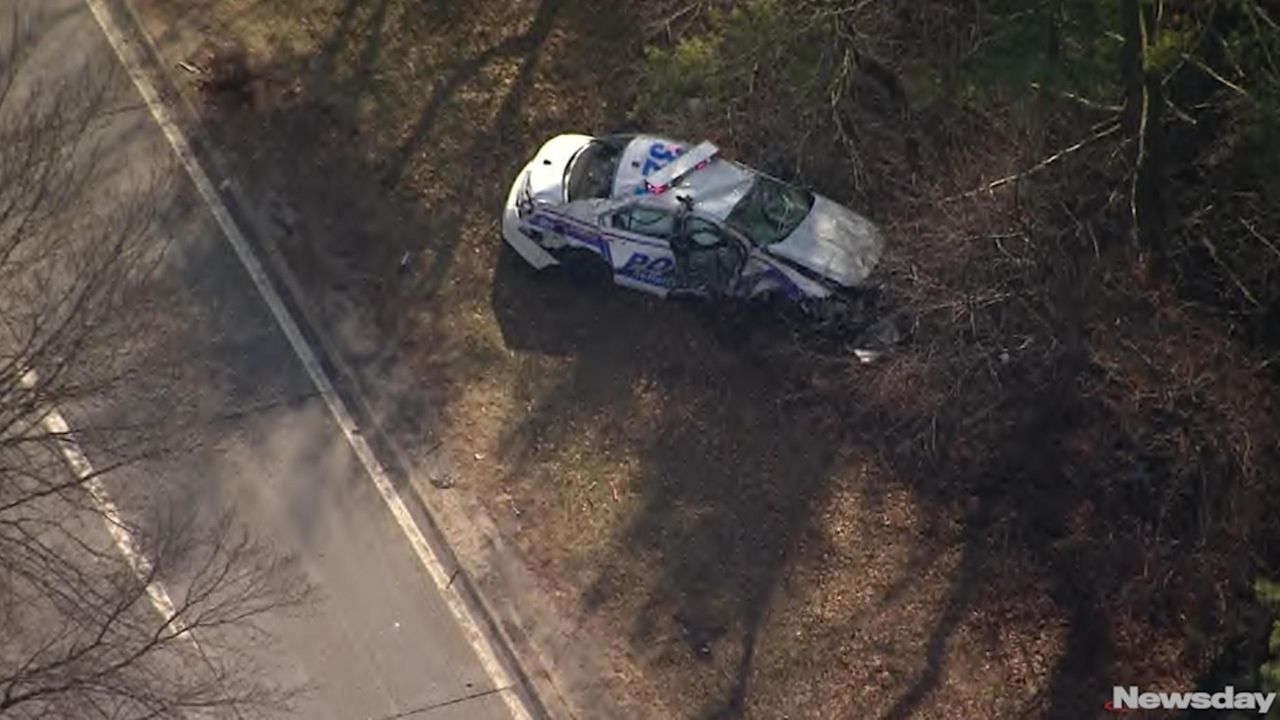 The incident began when police received a call about suspicious people in a parked car in front of a home on Ackerson Boulevard just after noon on Tuesday, officials said. An officer from the Third Precinct arrived and was waiting for back-up with the keys in the ignition of his vehicle when Anderson, one of two people in the parked car, fled on foot, police said.

The officer left the car and ran after Anderson, police said. But Anderson“circled back” and drove off with it, police said.

He was arrested after crashing the cruiser off the southbound lanes of the Sagtikos, south of Pine Aire Drive, about two miles from where it had been stolen, police said. Anderson was taken to Good Samaritan Hospital Medical Center with minor injuries, police said.

A police spokesman said “The arrestee has connections” to the Crips but there’s “no information that it was a gang-related incident.” Gioe said nothing in court records indicates Anderson’s gang affiliaton.

According to the complaint, Anderson drove the police car “ for several minutes on public highways at a very high and dangerous rate of speed, recklessly swerving in and out of traffic putting other motorists in imminent danger.”

The complaint says Anderson took the car “ to get away from the cop that was running after him.”

Anderson and another man were arrested in June in connection with three auto thefts where they broke into homes, grabbed car keys and drove off, police said.

He also has other pending cases on charges of criminal marijuana possession, resisting arrest and aggrivated unlicensed operation of a motor vehicle, records show.

A spokesman for the Nassau District Attorney’s office said those cases are still open.

Anderson is due back in court on Feb. 26.