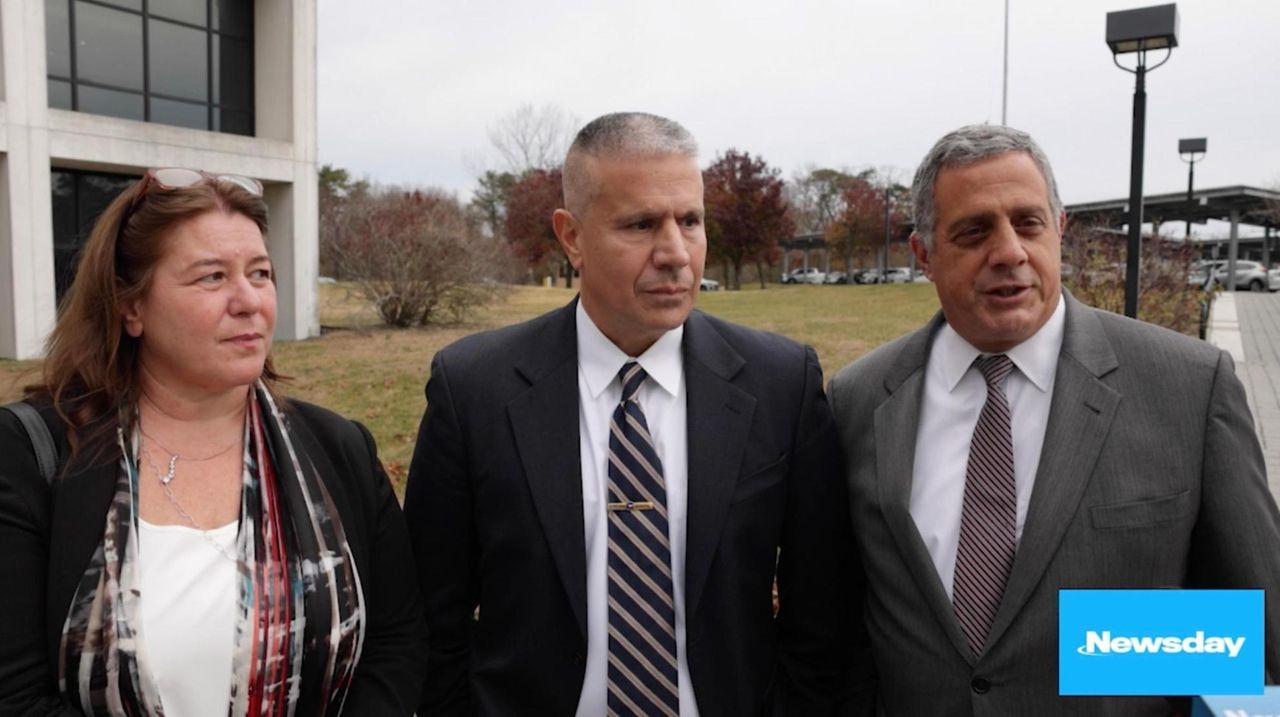 Former Suffolk police Det. John Oliva and his attorney spoke outside of a Riverhead courthouse Thursday after a judge tossed out Oliva's 2014 conviction on official misconduct for leaking information to Newsday, and said those involved in his prosecution were part of a "vindictive conspiracy." Credit: Newsday / Steve Pfost

A judge Thursday tossed out the conviction of an ex-Suffolk police detective accused of leaking information to Newsday, saying disgraced former Suffolk County District Attorney Thomas Spota, his top aide, and others involved in the prosecution, were part of a "vindictive conspiracy."

"All of those who engaged in this vindictive conspiracy became the abusers and oppressors," Camacho said in a Riverhead courtroom. "Shame on them."

An emotional Oliva, a 20-year police department veteran forced to retire after his conviction, teared up following the proceeding and thanked his defense team and the district attorney’s office for working to vacate his conviction.

"I was a dedicated law enforcement officer whose focus was to protect communities and my fellow officers by holding gang members accountable for their unconscionable actions," Oliva said. "Instead of being recognized for my commitment to the people of Suffolk County, I was unfairly targeted by the very people who were in charge of upholding the law. My reputation was tarnished and my career was cut short by a false arrest."

Oliva pleaded guilty to the official misconduct charge for providing information to Newsday reporter Tania Lopez about a string of gunpoint robberies. He was sentenced to a conditional discharge. Oliva maintains he did not leak the information.

His Garden City-based defense attorneys, Donna Aldea and Bruce Barket, claimed Oliva pleaded guilty "through duress" and as a result of "direct threats" to harm the career of his brother-in-law, also a Suffolk police officer, by Christopher McPartland, a top prosecutor under Spota.

Spota and McPartland, now convicted felons for orchestrating a cover-up of the 2012 beating of a prisoner by ex-Suffolk Police Chief James Burke, had obtained a court-sanctioned wiretap on Oliva’s phone through "misrepresentations and fraud upon the court," the defense attorneys said in their motion. Spota and McPartland, both set to begin five-year prison sentences next week, also used personal information from listening to Oliva's conversations over four months to "coerce" his guilty plea, the motion alleged.

In a statement Thursday, Suffolk District Attorney Timothy Sini said: "As our affirmation sets forth and as Justice Camacho found in his ruling, this unconstitutional prosecution was brought for vindictive reasons and constituted outrageous government conduct. This was an abuse of power at the highest level of law enforcement. I created the CIB to investigate and remedy wrongful convictions, which is what was done here today. I am grateful to the CIB and the Court for righting this injustice."

Barket called Olivia’s treatment "another sad, tragic episode in the Spota, Burke, McPartland disaster" and said the then-prosecutors "lied to the court, made material misrepresentations in an effort to obtain an eavesdropping warrant … then they threatened Detective Oliva with harm to his family if he didn’t accept the guilty plea to a crime he didn’t commit."

Barket applauded Sini, Master and their team for "righting this wrong."

The investigation by Sini’s Conviction Integrity Bureau found that Spota and McPartland "misled the court" in order to obtain a wiretap of Oliva’s phone and their claim that the wiretap was necessary to protect officer safety was "at least partially false." The investigation also found that Oliva’s claim he was induced to plead guilty in part by the existence of the wiretap and by threats made by McPartland to harm him and his family was "credible."

According to testimony at their 2019 federal trial, Spota and McPartland, along with Burke, viewed Oliva as an enemy because they suspected him of revealing embarrassing information to the press, including the fact that Oliva and other detectives had been removed from a federal task force. Trial witnesses said Burke wanted to prevent Oliva and then police Det. Robert Trotta, now a Republican Suffolk County legislator, from talking to federal authorities.