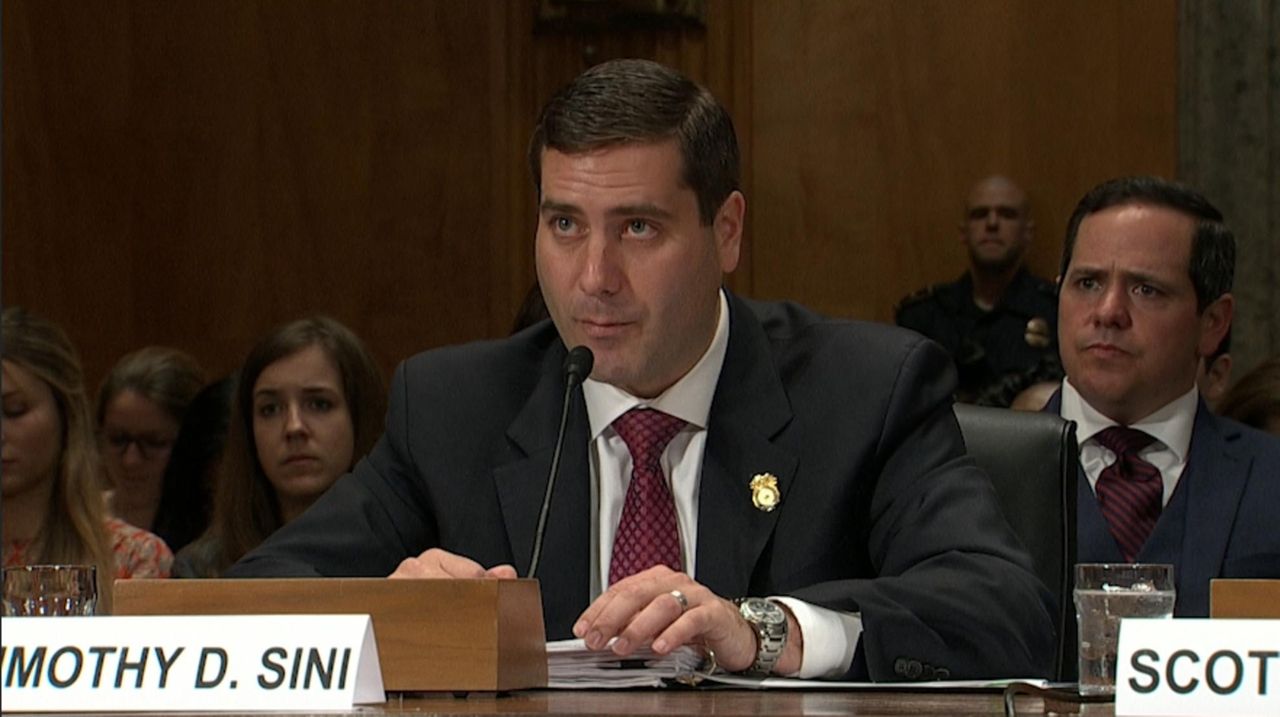 Suffolk County Police Commissioner Timothy Sini testified before the Senate Committee on Homeland Security and Governmental Affairs, on Wednesday, May 24, 2017, about the recent spike in MS-13 gang violence in the county. Credit: News 12 Long Island

Sini, in testimony before the Senate Homeland Security and Governmental Affairs Committee, said MS-13 was responsible for 27 killings in Suffolk since 2013 with 17 of those committed since January 2016. As proof that members of the gang are “savages,” Sini said they recently attempted to recruit a 10-year-old.

“This database is mission-critical to facilitating effective collaboration,” Sini told the committee.

The police commissioner later said he envisioned collaboration that would eventually include international law enforcement from countries such as Honduras, Guatemala, and El Salvador. MS-13 is centered in the prison systems of the three Central American countries, according to experts.

Sini to testify on Capitol Hill about MS-13 on LI

“What we’re seeing for the first time on Long Island is direct connections with young gang members to El Salvador,” Sini said.

In Suffolk, the gang has about 400 members, Sini told the committee.

His testimony comes as Suffolk County has become an epicenter of MS-13’s brutality in the United States — the most recent violence including the still-unsolved killings of four young men whose bodies were found in a Central Islip park in April.

Sini, who last week announced his candidacy for Suffolk district attorney, told senators the gang has preyed on the county’s most vulnerable: youth, and in particular, the thousands of unaccompanied minors who have arrived in Suffolk in recent years, many fleeing gang violence in Central America.

Sini told the committee the gang has mostly concentrated on committing crimes such as homicide, assault, drug-dealing, extortion, robbery and burglary, although many have day jobs. In 2016, Sini said, MS-13 members most frequently engaged in assault, with their signature weapon a machete.

He said more federal prosecutors are needed for a pilot program with the FBI and U.S. attorney’s office that would allow all MS-13 gang arrests to be screened for federal prosecution under stiffer statutes.

Sini appeared alongside police officials from Chelsea, Massachusetts and Montgomery County, Maryland, which have also been recent hotbeds of MS-13 violence.

Sini referenced the gruesome September killings of Kayla Cuevas, 16, and Nisa Mickens, 15 — best friends who grew up together in Brentwood, where they were beaten with bats and mutilated with sharp objects. Their deaths shocked the community and led to the discovery of the bodies of three young men, also believed to be victims of MS-13.

More than a half-dozen members of MS-13 were indicted earlier this year in the killings of Cuevas, Mickens, and MS-13 member Jose Pena-Hernandez, 18, whose skeletal remains were found in a wooded area near the former Pilgrim Psychiatric Center in the days after the girls’ bodies were discovered.

Asked by committee chairman Sen. Ron Johnson, a Republican from Wisconsin, to describe what drives MS-13, Sini replied that the gang’s main objective “is to exist and be feared.”

Det. Scott Conley of the Chelsea, Massachusetts police department who has traveled to El Salvador about a dozen times in his work on a federal gang task force in the Boston area, said while the gang is “just maintaining” for now, the fear is that its cliques along the East Coast will attempt to replicate its more established syndicates in Los Angeles and Central America and seek to run sophisticated drug enterprises.

In Montgomery County, with a population of about 1 million and located outside Washington D.C., MS-13 gang members have organized to extort Hispanic business owners for money and threatened their relatives if they didn’t pay.

Sini said “before they do develop that level of sophistication, we need to take them out, eradicate them.”

Ironically, he said, it’s the lack of organized activity by MS-13 in Suffolk that makes it more difficult to arrest and prosecute members.

“Oftentimes, what we find with MS-13 in Suffolk County, they are quiet because we’re out in full force,” Sini said in an interview afterwards, referencing the more than 200 local arrests of MS-13 in the last nine months. “We have an incredibly enhanced presence right now in the affected areas and we’re targeting MS-13 members relentlessly. . . . They’re off the streets, they’re quiet . . . Then they’re told to put in work, and sort of without any notice or any sign, then we’ll have violence. That’s what makes it particularly difficult to patrol our way out of this situation, or even do targeted enforcement.”

Suffolk’s battle to “eradicate” MS-13 has received national attention after President Donald Trump both tweeted and spoke at a rally about the recent gang violence on Long Island.

Trump’s attention to the issue was followed by an April visit to Central Islip by Attorney General Jeff Sessions, who promised to help combat the gang with more rigorous border security.

Community advocates have said the Trump administration’s push for more deportations and cooperation with police and jails means that some immigrants don’t feel safe in talking to local law enforcement.

“We reject any attempt to exploit the very real challenges of gang-related violence in Suffolk County to further the Trump regime’s bigoted, anti-immigrant agenda,” said Donna Lieberman, the NYCLU’s executive director, in a statement. “ . . . The Suffolk County Police Department must re-commit to building trust with Latino communities in order to combat the recent wave of violence.”