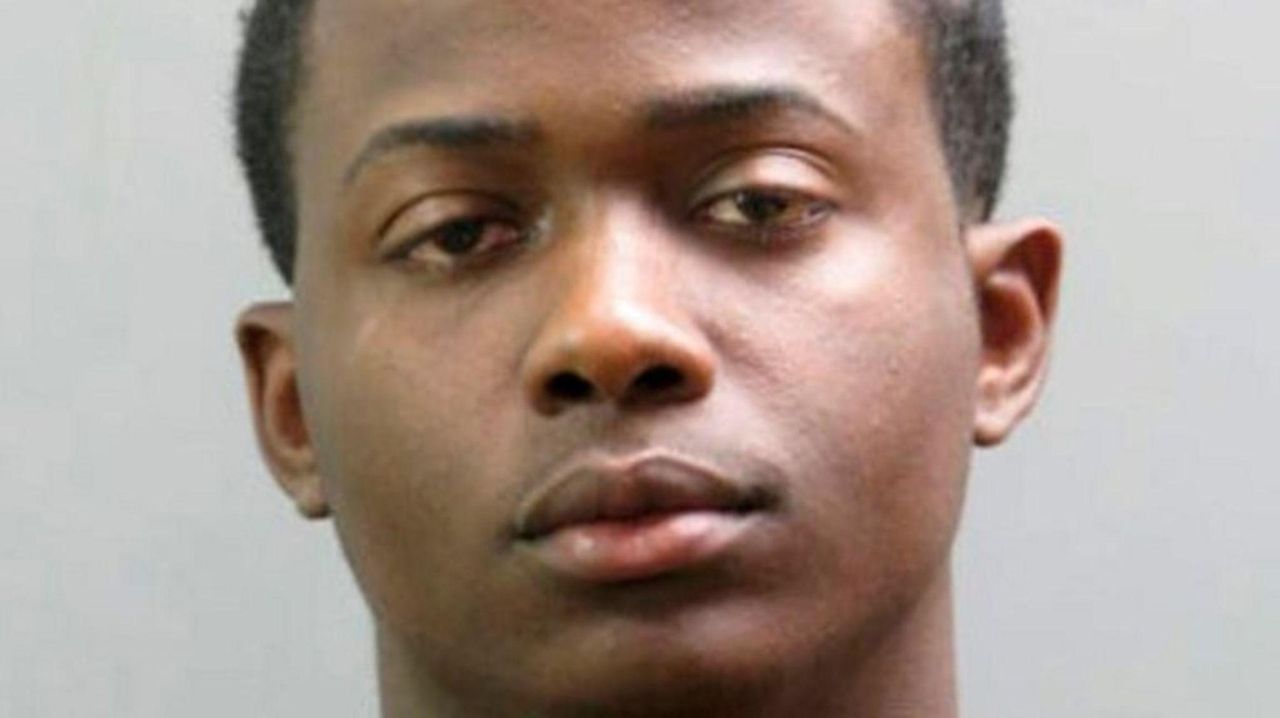 A Hempstead man, Dwayne Henderson, has been charged with assault after dragging a police officer who had stopped the suspect’s vehicle on Sunday, May 13, 2018, Nassau County police said. Henderson drove away, dragging one officer, who suffered injuries to his knees, elbows and right knee, police said. Credit: News 12 Long Island

A Hempstead man has been charged with assault after dragging and running over a police officer who had stopped the suspect’s vehicle for speeding, Nassau County police said Monday.

Two officers pulled over a BMW driven by Dwayne Henderson, 21, at 5:21 p.m. Sunday at the Gulf gas station on Greenwich Street in Hempstead, police said.

When the officers learned Henderson had a suspended license, they ordered him out of the car, but he refused, authorities said.

The driver sped off, dragging an officer who got his hand caught in the passenger side door handle, authorities said.

Surveillance video obtained by News 12 Long Island shows the officers, one on each side of the car, looking in the windows. The car then begins to move forward and the officer on the passenger side is dragged through the service station, the video shows.

The officer was dragged about 60 feet as Henderson pulled out onto Robinwood Avenue, and when the officer fell away from the car, he was run over by the rear tire, according to court documents.

The officer suffered injuries to his knees, elbows and right knee, police said, and was treated at a hospital and released.

Another officer later spotted the BMW in Uniondale and arrested Henderson after a brief pursuit on foot and a struggle on Macon Place, court documents said. Henderson flailed his arms and legs as the officer tried to cuff him, according to the complaint against him, but he gave up after the officer took out his Taser.

Police said they recovered a clear bag with a substance that appeared to be crack.

Henderson was arraigned in First District Court in Hempstead on charges of assault, reckless endangerment, criminal possession of a controlled substance, resisting arrest and unlawful fleeing of a police officer. Bail was set at $30,000 bond or $15,000 cash. He was represented by the Legal Aid of Nassau County; his attorney could not be immediately reached Monday night.

Court documents gave the injured officer’s last name as Bruno and the police union confirmed that a video of Officer Ricky Bruno on its YouTube channel shows the same officer who was dragged.

Bruno was diagnosed with brain cancer at age 17, but he survived chemo, graduated and joined the Army as a lieutenant before becoming a Nassau officer in 2013, according to the video, from Steiner Sports CEO Brandon Steiner, who had arranged a tour of Yankee Stadium for Bruno.