Tyrene Rodriquez, the housekeeper for Thomas Valva and Angela Pollina, inside courtroom at Suffolk County Court in Riverhead on Monday. Credit: James Carbone

Thomas Valva, the 8-year-old Center Moriches boy who prosecutors say was killed by his ex-NYPD father and the father’s fiancee, was naked, "very cold" and blue in color as his dad performed CPR on the boy just before his death, the family housekeeper testified Monday.

Valva died from hypothermia on Jan. 17, 2020, after prosecutors allege, the boy was forced by his father Michael Valva and his father’s then-fiancee Angela Pollina, to sleep in an unheated garage. Valva, 42, and Pollina, 43, have both pleaded not guilty to second-degree murder and child endangerment charges in connection with Thomas’ death.

Tyrene Rodriguez, who cleaned the Valva home weekly, testified for the defense in Suffolk County Court in Riverhead about what she observed the day Thomas died. The pretrial hearing is to determine whether key evidence against Valva and Pollina — including video surveillance, statements made by them to police and Thomas’ clothing — will be admitted as evidence at trial.

Rodriguez said that she heard Thomas crying as she cleaned a main-level bathroom and saw the defendants walking him toward the basement door. About five or 10 minutes later, Rodriguez testified, Pollina tapped her on the shoulder and said Thomas wasn’t breathing and Valva was on the phone with 911.

Rodriguez said she and Pollina ran to the basement, where she saw Valva giving CPR to Thomas, who was laying on a sofa. Rodriguez, who said she had previously received CPR training, said she told Valva that Thomas should be on a hard, flat surface, after a 911 operator gave Valva the same instruction.

Rodriguez said Valva picked Thomas up and put him on the floor and she held Thomas’ head, and at one point, leaned his head back to open his airway as Valva continued giving Thomas mouth-to-mouth resuscitation and chest compressions.

"I was just holding his head," said Rodriguez. "He was very cold. He was damp."

Pollina, according to Rodriguez, was standing behind them and "just freaking out."

An emergency responder took over the CPR, and seeing no change in Thomas’ condition, carried him to a waiting ambulance. Valva, according to Rodriguez, "went upstairs to change" clothes and then went into the ambulance with Thomas, Rodriguez said.

Prosecutor Patricia Theodorou, while cross-examining Rodriguez, noted that the Valva family’s dog "Bella," slept in a heated mud room inside the home. Thomas, who was on the autism spectrum, slept in the unheated garage when the outside temperature was just 19 degrees, prosecutors have alleged.

Also testifying Monday for the defense was Laura Lauretta, a next-door neighbor of the Valva family who works as a paralegal. Lauretta, who said she is married to Second Precinct Suffolk Police Officer Sal Lauretta, said she went to the hospital the day of Thomas’ death because she was concerned about the family's other children. She said she texted and called Pollina and got no answer.

When she arrived at Long Island Community Hospital in Patchogue, she was led into a room by hospital security and saw Pollina laying in a bed. She asked Pollina what happened several times and Pollina, whose back was to her, didn’t answer, Lauretta testified.

"She was groggy," said Lauretta. "She was sleeping. She was moaning."

Pollina wiped tears from her eyes as Lauretta spoke. Lauretta said two men who she presumed to be Suffolk police detectives then asked her to leave the room. Suffolk police have testified previously that Pollina was "lucid" when they interviewed her in the hospital room that day. 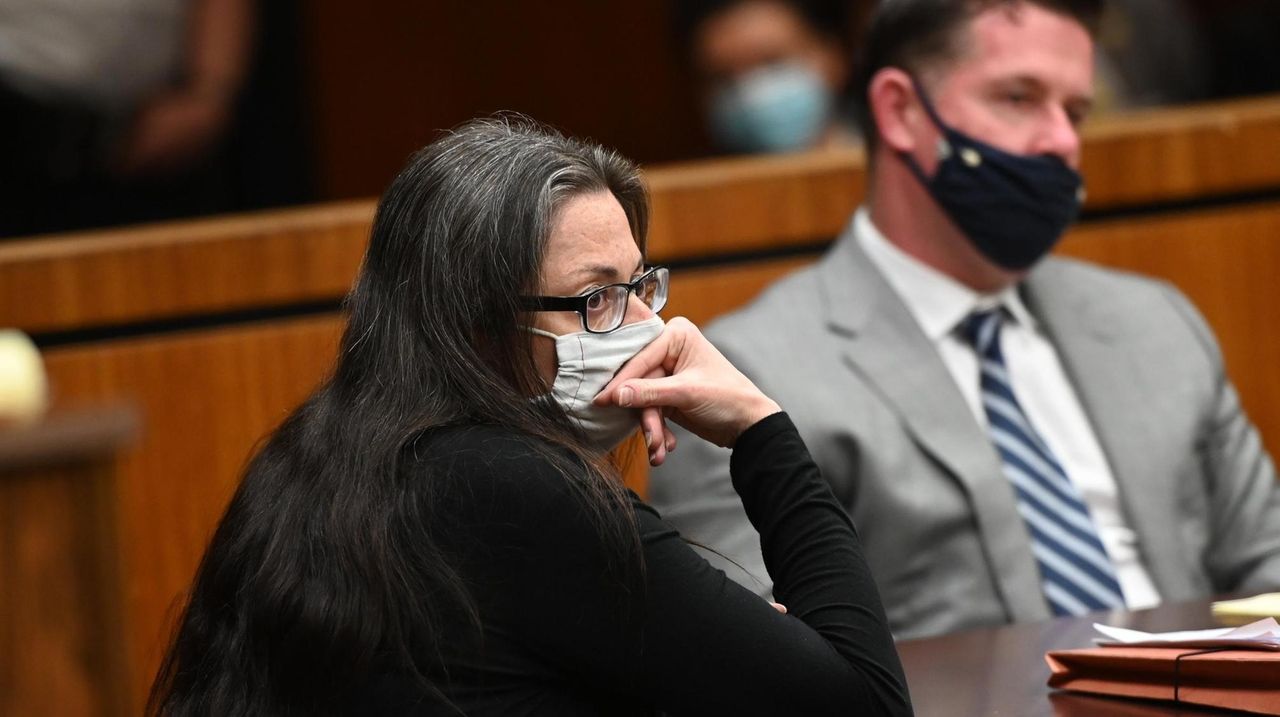 Pollina defense attorney Matthew Tuohy said the testimonies of both Lauretta and Rodriguez demonstrate that his client did not give consent for Suffolk police to stay in the home after the emergency care for Thomas’ had ceased, or to conduct a search, and they contend the evidence should be tossed. Tuohy also said his client, who he said was administered Xanax at the hospital after learning Thomas had died, did not willingly sign a consent form for police to access the home’s video surveillance.

"She was given a narcotic," said Tuohy after proceedings ended for the day. "She couldn’t really consent….Never did she ever intend upon giving permission to stay and remain in the house. The exigency had expired. These guys [prosecutors] have a huge problem and they know it. They never got express written permission from either Angela or Michael to remain at the house and search for evidence."

The hearing is scheduled to continue Wednesday morning when Pollina is expected to testify.