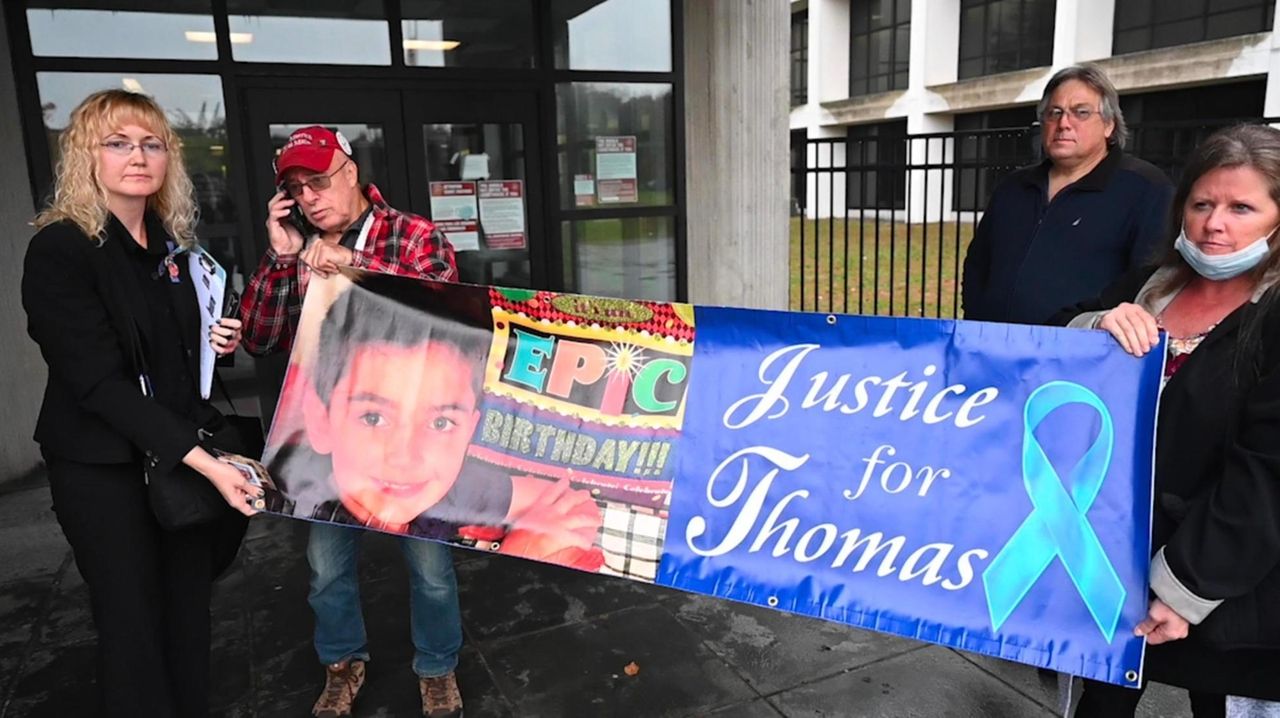 A Dec. 16 hearing date was set Wednesday to determine the admissibility at trial of statements that authorities allege Michael Valva made to police in connection with his son’s death. Newsday spoke with Justyna Zubko-Valva, Thomas Valva's mother, after the hearing. Credit: James Carbone

The New York City police officer accused of killing his 8-year-old son, Thomas Valva, who authorities said died after he was forced to sleep in a freezing garage at their Center Moriches home, resigned from the police department Wednesday, according to his attorney.

Valva, 41, a 15-year-department veteran who has been suspended from the NYPD without pay since his January arrest, appeared briefly Wednesday morning in Suffolk County Court in Riverhead.

"He voluntarily resigned today," LoTurco said. "He executed paperwork in that regard today, which protects his benefits and his pension. There's no admission of any wrongdoing. It allows him to forgo any disciplinary hearing and in exchange, he will no longer receive any salary or any future benefits."

McRorie said Valva retired without permission from the police commissioner, therefore he will not collect his pension.

"He will not be receiving a pension, however he will receive any money he contributed to the pension system back," McRorie said. The sergeant added that she did not know the amount of money Valva paid into the pension system during his police department career and has no access to that information.

Both Michael Valva, 41, and his fiancee Angela Pollina, 42, have pleaded not guilty to second-degree murder and child endangerment in the Jan. 17 death of Thomas.

A third-grader at East Moriches Elementary School, Thomas, who was on the autism spectrum, died from hypothermia after authorities said he was forced by Valva and Pollina to sleep in an unheated garage as temperatures outside dipped to 19 degrees. Pollina’s attorney waived her court appearance Wednesday.

Suffolk Supreme Court Justice William Condon on Wednesday set a Dec. 16 hearing date to determine the admissibility at trial of statements that authorities allege Michael Valva made to police in connection with his son’s death. Valva, who appeared to be performing CPR on Thomas in the basement when the police arrived, told authorities that Thomas had fallen in the driveway while waiting for the school bus and then lost consciousness, prosecutors have said.

Prosecutors have also alleged that after Thomas was pronounced dead at the hospital, Michael Valva was asked if he needed anything and he replied: "I’ve been through more stressful things than this."

LoTurco declined to comment on any of the alleged statements Wednesday.

"I’m not commenting on any statements that we are attempting to preclude as a part of our application to exclude any statements. I’m not going to comment on our strategy."

Condon also granted a two-week extension request from LoTurco and Pollina’s attorney Matthew Tuohy to present defense motions in the case. Prosecutor Kerriann Kelly, chief of the Suffolk District Attorney’s homicide bureau, did not object, citing what she called an "unprecedented" amount of discovery in the case.

The defense now has until Nov. 18 to file motions in the case.

Prosecutors have said Thomas and his two brothers lived in a "house of horrors" where they were beaten and starved by Valva and Pollina.

Thomas’ mother, Justyna Zubko-Valva, who attended Wednesday’s conference along with her supporters, said despite the attempt of Valva’s attorney to get Michael’s statements to police thrown out, other evidence in the case — such as Thomas’ 76.1 body temperature when he was brought to the hospital — will be difficult to counter.

"His attorney’s going to try to challenge the statements made by Michael to the police ….," said Zubko-Valva, speaking outside the Riverhead courthouse. "The first original statement he made in regards to Thomas’ death was Tommy fell in the driveway and hit his head . . . then he changed his statement."

A timeline of the Thomas Valva case Suffolk panel probes failings that led to death of Thomas ValvaThe three-person committee will comb through Suffolk County's child protective services, police, school, court and other records to establish a case timeline and issue recommendations for reforms. Thomas Valva's mother files $200M lawsuit in son's death The federal suit contends that local officials failed to protect boy, 8, who died in January after his father allegedly forced him to sleep in an unheated garage. Lawyer: Thomas Valva's father 'emotionally distraught' over deathMichael Valva's new court-appointed attorney said, "Thomas' death was a nightmarish accidental death and clearly not a murder."