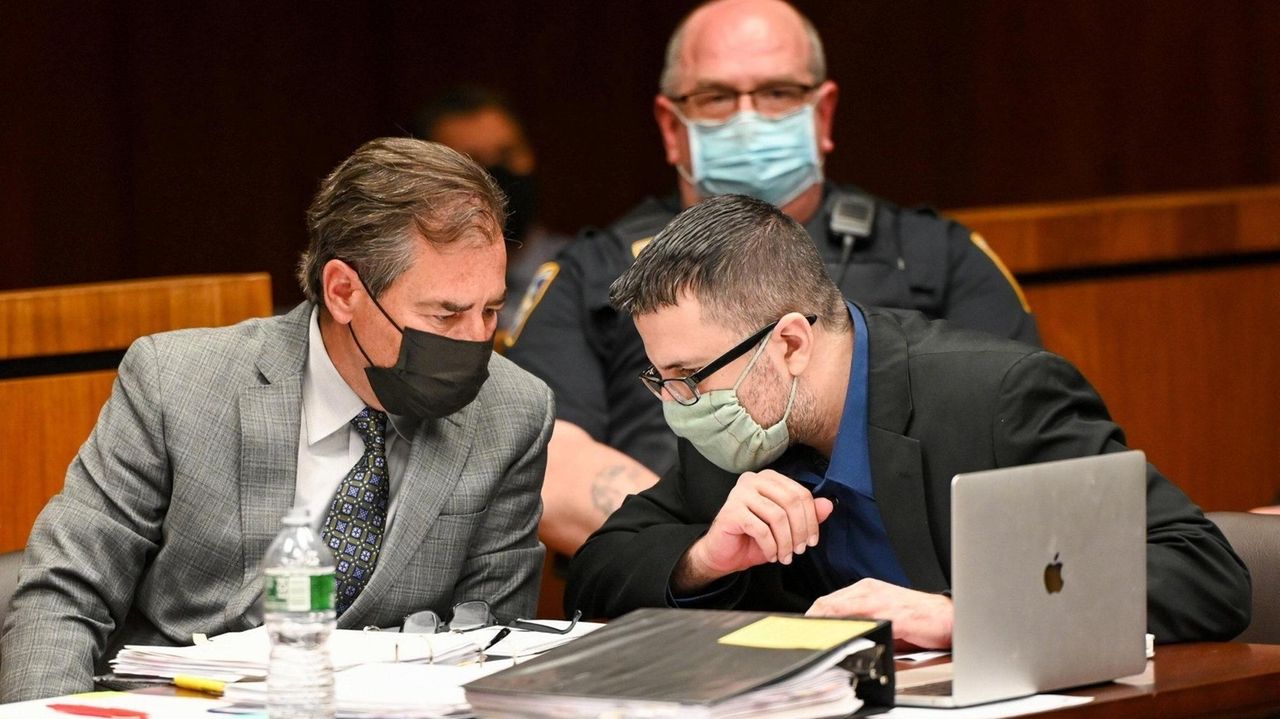 Michael Valva, the ex-NYPD officer from Center Moriches and his then-fiance, Angela Pollina, both charged with murder in the death of Valva's 8-year-old son Thomas Valva, agreed to police interviews just an hour after the boy’s 2020 death and did not raise concerns about the police investigation inside their home, Suffolk Det. Norberto Flores testified during a pre-trial hearing Thursday in Riverhead. Credit: James Carbone

The ex-NYPD officer from Center Moriches and his then-fiance, both charged with murder in the death of 8-year-old Thomas Valva, agreed to police interviews just an hour after the boy’s 2020 death and did not raise concerns about the police investigation inside their home, a Suffolk police detective testified.

Suffolk Det. Norberto Flores made the assertions during a pre-trial hearing Thursday in the murder case against Michael Valva and his ex-fiance Angela Pollina in Suffolk County Court in Riverhead. The hearing is to help a judge determine whether video surveillance and other evidence in the case will be admissible at trial.

Flores testified that he interviewed Valva and Pollina separately on Jan. 17, 2020 at Long Island Community Hospital in Patchogue after Valva's son Thomas was pronounced dead there.

Defense attorneys for Valva, 42, and Pollina, 43 — both of whom have pleaded not guilty to second-degree murder and child endangerment in connection with Thomas’ death — said their clients felt tremendous pressure from Suffolk police, who did not immediately get search warrants for the home.

Prosecutors have alleged that Valva and Pollina forced Thomas, who died from hypothermia, to sleep in an unheated garage in frigid temperatures before his death.

Defense attorneys for the defendants have asked Supreme Court Justice William Condon to throw out key evidence against Valva and Pollina -- including video surveillance, Thomas' clothing from the day of his death and the defendants’ statements to police -- on the allegation that the evidence was obtained unlawfully.

Suffolk prosecutors have denied the allegations and said the police presence at the home was warranted because they were responding to an emergency and conducting a death investigation. Prosecutors were later granted three search warrants in the case, according to court papers.

Valva was "matter-of-fact" in relaying the details of what transpired before his son’s death in a police interview and Pollina was "lucid," despite the fact that she received treatment at the hospital because she was upset about Thomas’ death, Flores said.

Pollina signed a consent form giving police permission to access the Nest and Ring video surveillance cameras at the home, Flores testified. She also provided the user name and password for one of the systems, Flores said.

And later, when detectives needed a code to gain access, Pollina complied, Flores said. Her attorney disputed that.

Pollina’s attorney Matthew Tuohy said his client was administered Xanax at the hospital after Thomas’ death.

"He characterized it like it was a very friendly interaction, he was comforting her at different points, when really it was adversarial," said Tuohy outside the courtroom. "He was putting a tremendous amount of pressure on her, he really was, and at a very, very traumatic time."

Tuohy, who had previously said he intended to call Pollina to testify, said Thursday that if prosecutors get permission to expand the scope of topics they can questions Pollina about, he would not allow her to take the stand.

"Mr. Valva has told me he felt nothing but coercion," said LoTurco. "There was coercion, duress …we find Det. Flores’s testimony to be less than credible."

When pressed by LoTurco on cross-examination on why he didn’t seek a search warrant for the home the day Thomas died, Flores said Valva was "being cooperative and I felt he wanted to assist us in finding out what happened to Thomas."

Outside court, LoTurco was critical of that assertion: "You can’t just say, ‘Oh, it seems like they were ok with it.’ No, that’s doesn’t fly."

In the days after Thomas’ death, Valva continued to communicate by phone and in person with Flores, the detective testified, in conversations he described as cordial.

Two days later, Flores said he spoke to Valva at the Franklin Square home of Pollina’s parents, who had been granted temporary custody of the couple's children.

"When I saw Michael Valva inside he called me over and he asked me whether he was going to be arrested," Flores recalled. "I said ‘no,’ I wasn’t arresting him." Valva asked Flores the same question later that afternoon, Flores said.

Valva continued to call Flores, the detective said, even asking for help in getting Thomas’ body released from the medical examiner for burial.