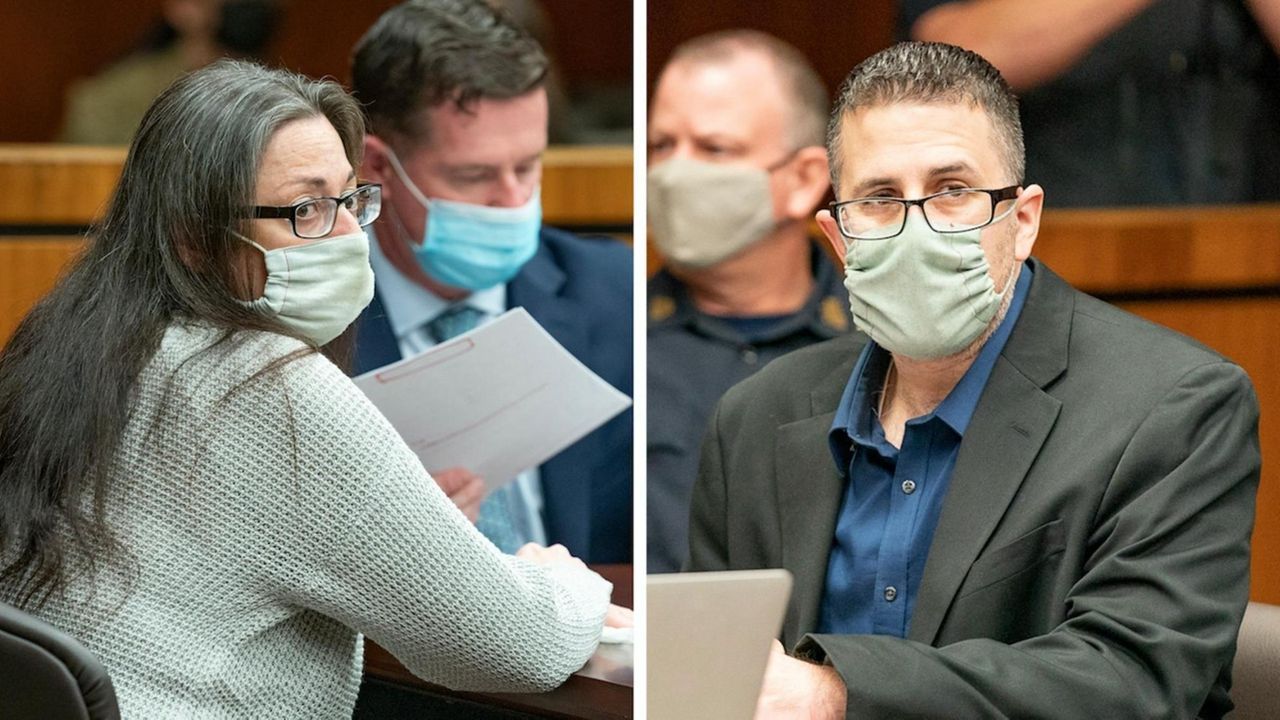 The former NYPD officer accused of killing his 8-year-old son told 911 operators he was trying to revive the boy with CPR, but the first Suffolk officer to respond testified Tuesday she did not see the father giving his son aid. 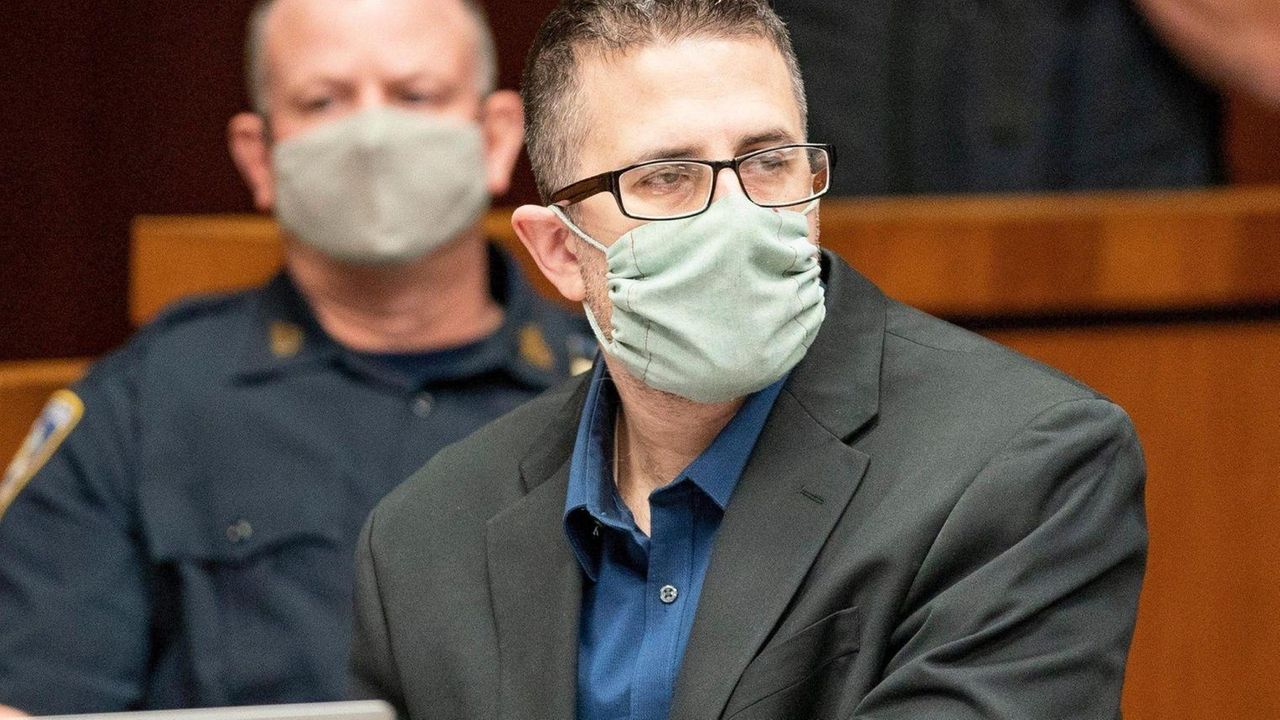 Listen to Michael Valva's 911 call The 911 call made on the morning of Jan. 17, 2020, by Michael Valva, the former NYPD officer accused of killing his 8-year-old son.  Credit: Suffolk County District Attorney's Office

The dramatic 911 call was played in a Riverhead courtroom Tuesday during a pretrial hearing to determine whether other evidence in the case, including video and audio surveillance from the home, will be admissible at trial. Key to that issue is whether responding police saw surveillance cameras when they first arrived or, as the defense contends, while doing an illegal search.

Valva, along with his co-defendant and then-fiancee Angela Pollina, has pleaded not guilty to second-degree murder and child endangerment charges in Thomas’ death and the alleged abuse of Thomas’ older brother.

Authorities said Thomas died of hypothermia after Valva and Pollina forced the boy and his older brother, Anthony, to sleep in an unheated garage at the couple’s home on Bittersweet Lane in Center Moriches on that frigid January night.

Valva, 42, and Pollina, 43, both appeared in the courtroom Tuesday wearing masks. Valva's ankles were shackled, while Pollina, who was wearing black wedge shoes, was not in shackles.

Valva removed his glasses and dabbed his eyes with tissue as he listened to the 911 call. Pollina also briefly cried while the call was played.

On the 911 call, Valva was heard counting aloud, as if to coincide with chest compressions he was administering to Thomas.

Valva, a veteran NYPD officer, told the operators: "His belly is filling up a lot as I’m doing CPR. … Is that normal?"

At one point, one of the 911 operator asked if Thomas was breathing.

Valva chuckled slightly and replied: "I don't know, to be honest."

Seventh Precinct Suffolk Police Officer Cassidy Lessard testified that when she entered the basement of the Valva home at about 9:45 a.m., she saw Michael Valva kneeling at the head of Thomas, who was wearing only a pair of gray sweatpants, pulled up to his knees, and socks. Michael Valva was not performing CPR on his son, but was on his cellphone, Lessard said.

Defense attorneys for both defendants have asked Supreme Court Justice William Condon to suppress video and audio from a surveillance system at their Center Moriches home, as well as statements allegedly made by the defendants, on the grounds that police began searching the house without permission or a search warrant.

Prosecutors have vigorously denied those allegations saying the initial police presence was allowed because they were providing emergency services and police later received permission from both Valva and Pollina to search the home.

During her testimony Tuesday, Lessard said police training dictates that CPR should not stop until there is an improvement in a patient's condition.

"He told me that the child fell while getting ready for school; he peed on himself so he put him in the shower because he was a mess," Lessard said, recalling what Michael Valva said. Lessard said when she knelt down beside Thomas to take his pulse, "he was cold to the touch."

As Lessard did 14 to 15 rounds of CPR on Thomas, with the assistance of her partner and EMS personnel, she testified, she could hear Michael Valva "pacing back and forth." Valva said "several times" that Thomas "ran into the basement wall, peed himself, so he put in him in the bath," Lessard said.

Thomas had no pulse and was not breathing, so she picked up Thomas, whose back and hair was wet, and carried him to a waiting ambulance.

Lessard and her colleagues continued CPR on Thomas in the ambulance on the way to the hospital as Michael Valva sat in the front seat. Lessard said she heard the father ask several times: "Is Thomas alive?"

In testimony key to the admissibility issue, Lessard said when she spoke to responding homicide detectives at the hospital, she told them about the Ring doorbell camera she noticed when she first arrived at the Valva home.

But on cross-examination by Valva’s attorney John LoTurco, Lessard admitted she had not noted the presence of the surveillance camera in her supplemental report. Lessard also testified that she had not written in the report that she told the homicide detectives about the camera.

Outside the courtroom, LoTurco said: "It says to me that she is fabricating her testimony."

Suffolk Police Sgt. Gregory Turzer also testified that he responded to the Valva home after the ambulance had already left — which defense attorneys contend was inappropriate because the emergency had ceased — and went inside the home and spoke to Pollina and the family's housekeeper.

Turzer said Pollina told him that Thomas fell outside, was "crying hysterically" in the kitchen for about 20 minutes and then peed and defecated on himself so she and Valva took the boy downstairs to the basement bathroom to clean him up.

"Did she ever say she did not want to talk to you?" asked prosecutor Patricia Theodorou.

"She did not," Turzer said.

Pollina's attorney, Matthew Tuohy, who has said his client is innocent and blamed Thomas’ death on Valva, questioned whether Turzer should have responded to the home at all because Thomas had already left in an ambulance.