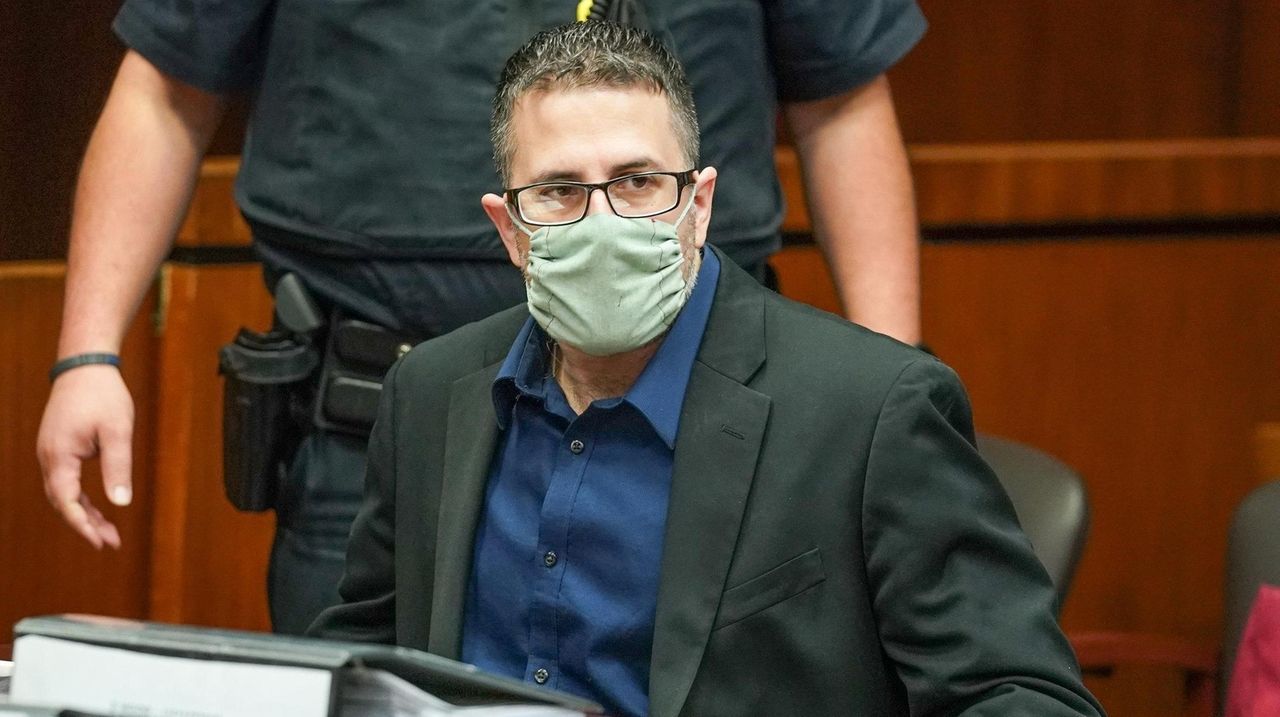 Michael Valva’s divorce attorney took the stand in a pre-trial hearing in the Thomas Valva case. Angela Pollina and Michael Valva are charged with murder in the death of the 8-year-old boy. Pollina may take the stand next week. Newsday's Cecilia Dowd has the story.  Credit: Howard Schnapp; Photo Credit: Pool Photo/ Dennis A. Clark; David Wexler; Justyna Zubko-Valva

The ex-NYPD officer accused of killing his 8-year-old son Thomas Valva texted his divorce attorney the day the boy died and said Suffolk police investigating were "forceful" and asked the lawyer to tell police to leave his Center Moriches home, the attorney testified Friday.

Lindenhurst divorce attorney Shana Curti testified during a pretrial hearing in the murder case of Michael Valva and his ex-fiancee Angela Pollina that she told a Suffolk police detective to stop searching the house and leave so the family could have privacy as they grieved.

Curti's testimony, defense lawyers for the pair contend, is key to their fight to have evidence against Valva and Pollina, including video surveillance, thrown out on grounds that it was illegally obtained by police.

"I asked them to please leave," Curti testified on direct examination by Pollina's defense attorney Matthew Tuohy in a Riverhead courtroom. "Give them privacy so they can grieve."

Valva and Pollina have pleaded not guilty to second-degree murder and child endangerment charges in connection with Thomas' Jan. 17, 2020, death. Prosecutors allege the pair forced Thomas to sleep in an unheated garage in freezing temperatures. Thomas died from hypothermia.

But Suffolk Homicide Det. Norberto Flores testified earlier Friday that Curti didn't explicitly tell him to leave the home, but police left shortly after the call because they had wrapped up their investigation at the house.

Curti, who said she met Valva in December 2015 when she began representing him in his divorce from Thomas' mother, testified about receiving a text from Valva at 10:50 that morning: "Thomas passed away. He banged his head."

But prosecutors pointed to another text to bolster their contention that Valva didn't feel pressured by investigators.

At 12:07 p.m., Valva wrote: "OK, I just talked to detectives," which coincides with the approximately half-hour interview that Flores said he conducted with Valva at Long Island Community Hospital in Patchogue, where Thomas was pronounced dead.

But at 2:37 p.m. Valva texted Curti, she testified, and said: "Cops getting a little forceful out here. Is it OK if I say you're my attorney."

On cross-examination, prosecutor Daryl Levy ripped into Curti, who signed an affidavit in November claiming that she spoke to Suffolk police at about 2:05 p.m. on the day Thomas died and told police to leave the Valva home.

But Curti's own phone records, she conceded, showed she spoke to the police detective closer to 2:40 p.m. on a call that lasted seven minutes and 18 seconds.

"They were trying to suggest she had a relationship with Michael Valva," LoTurco said, referencing Levy's questions about "personal" texts between Curti and Valva. "If she was going to fabricate her testimony, she had so many opportunities to help us out."

"If it wasn't intentional, was it neglectful?" Levy asked.

"I don't believe so," Curti replied.

Curti testified that at 3:06 p.m. Valva texted Curti again and said: "Me nor Ang gave them permission to stay."

He then added: "Nice to be treated like this. Unreal. At the end of the day, Tom is gone."

"There was coercion and there certainly wasn't this permission to search," he said outside the courthouse after the hearing. "I think today went well for us."

Pollina, seated at the defense table, became emotional when she saw her sister seated in the courtroom gallery.

Lucia Pollina, 53, said in a brief interview that she hasn't seen her sister in a year. "CPS and everybody else is to blame for this," the sister said. "She's a good person. She's got a good heart and she loves her kids."

Lucia Pollina, who also was moved to tears, added: "She's a very good person, very hard to see my sister like this."

Lucia Pollina later got into a verbal spat that spilled from the courtroom to a hallway with a Babylon woman who has attended every day to watch the proceedings.

Witness: Couple agreed to talk to police after Thomas Valva's deathSuffolk Det. Norberto Flores made the assertions during a pre-trial hearing to help a judge determine whether video surveillance and other evidence in the murder case against Michael Valva and Angela Pollina will be admissible at their trial.