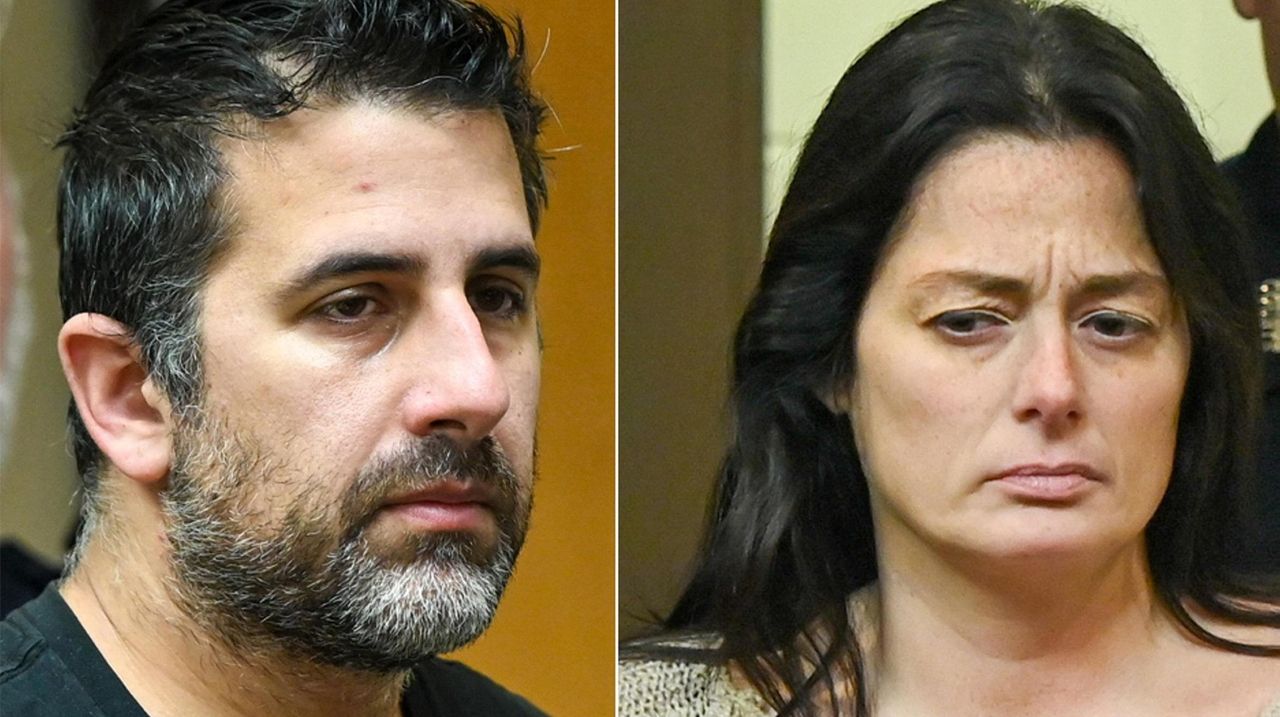 Eight-year-old Thomas Valva lived in a "house of horrors," where he and his older brother Anthony, 10, were slapped, punched and so starved that they ate out of garbage cans before the younger boy's death after being forced to sleep in a freezing garage, allegedly by his NYPD officer father and his fiancee, prosecutors said Thursday.

Michael Valva, 40, and Angela Pollina, 42, of Center Moriches, pleaded not guilty to an indictment of second-degree murder and endangering the welfare of a child -- counts related to alleged abuse of both Thomas and Anthony -- in separate arraignments before Suffolk County Supreme Court Justice William Condon in Riverhead. The two were held without bail.

Before a packed courtroom, Assistant District Attorney Kerriann Kelly, chief of the Homicide Bureau, outlined disturbing and graphic allegations of abuse suffered by the two boys as both defendants, handcuffed behind their backs and wearing street clothes, showed no emotion.

Kelly described how two nights before Thomas died, Pollina texted video clips to Valva while he was working as an NYPD officer, showing the boys sleeping "in nothing more than pajamas," on a "concrete slab" without blankets in the garage in 19 degree weather. He died on Jan. 17 of hypothermia, authorities said.

"Thomas shivering and shaking and holding himself because he needed to use the bathroom, looking into the Nest camera with pleading eyes for someone to help him," Kelly said, describing the video that detectives captured from a camera surveillance system in almost every room in the house, which she said was the defendants' "undoing."

At one point, in an exchange of texts Jan. 15, Pollina asked Valva if Thomas was going to school the next day.

"I have zero clothing for him," he replied, describing Thomas using an expletive. "He's not going anywhere."

After Thomas was pronounced dead at the hospital, Valva, according to Kelly, was asked if he needed anything. “I’ve been through more stressful things than this,” the prosecutor quoted Valva as saying.

Kelly described how at the start of the school year in 2017 -- when Valva gained custody of the boys -- the children appeared "unbearably thin," ate crumbs off tables and were denied breakfast if they didn't call Pollina "mommy."

"They were literally begging for food at school, eating crumbs off of the table, eating out of the garbage cans, going under bleachers in the gym to try to find food," Kelly said. "The teachers at the school brought extra food to the school for the children. The teachers repeatedly asked both this defendant and Michael Valva to bring additional food to the school because the children were so hungry. They never did."

The veteran prosecutor at times icily stared down the defendants while she detailed the alleged abuse. The boys' mother, Justyna Zubko-Valva, sobbed audibly with tears streaming down her face.

Zubko-Valva, who held prayer cards -- one bearing the image of a smiling Thomas -- had lost custody of all three of the sons she shared with Valva in September 2017 amid their contentious divorce proceedings, and hadn't seen the boys in about two years before Thomas' death.

"Now everybody’s trying to do the right thing, but where were you when I begged you for help? When you could have saved my child’s life?” said Zubko-Valva, 36, of Valley Stream, still crying after the arraignments.

Protesters lash out at CPS at Nassau hearing

Defense attorney Robert Del Col of Bay Shore, appointed by the court to represent Michael Valva for arraignment, warned against a rush to judgment.

"You don't represent a client in this sort of case, you represent the liberties and constitutional protections of all of us," he said after court, adding he was unsure if he would continue to represent Valva. The judge told Valva, who didn't qualify for a court-appointed lawyer, that he needed to hire an attorney.

Pollina's attorney, Matthew Tuohy, of Huntington,  said in a text message later that the family dynamics in the Bittersweet Lane home dictated that his client took care of her three daughters and Valva cared for his sons.

“She had been warned not to interfere with him, and the household situation. And her relationship with Mr. Valva made it impossible to navigate around his emotions, temper and behavior," Tuohy wrote.

Suffolk District Attorney Timothy Sini, who along with Suffolk Police Commissioner Geraldine Hart and other top police officials and homicide detectives attended the arraignments, said afterward that his office and the police are investigating all aspects of the case, including all the family's contact with authorities.

"It was very difficult for all of us to be in that courtroom and that's because what happened here is heinous," Sini said. "It is clearly a house of horrors."

Sini also raised the possibility of convening a special grand jury to examine the case, though he said he had not made a decision. "I am making a pledge to the public. We will get to the bottom of what happened here and we will be transparent at the appropriate time," he said.

Hart said the case was "one of the toughest" for her homicide detectives.

8-year-old was among about 1,000 children under CPS monitoring

Kelly, who detailed the allegations in her successful bid to have the couple remanded, said: "Those boys had to wear Pull-Ups to school as they soiled themselves in fear of her [Pollina] and their father Michael Valva," said Kelly, who added they often smelled of urine and feces. "While living in this defendant’s home, the children were locked in their bedrooms and denied access to the bathroom. When they soiled themselves, they were punished by being forced to sleep in the garage."

Both boys were diagnosed as autistic, but high-functioning, Kelly said. They were described as "sweet and loving children" by school district employees at the time of Thomas' death.

Kelly also described the boys being physically beaten by the defendants: "They were slapped and punched and carried by the wrist with their feet not touching the floor. Thomas was thrown and dragged down a flight of stairs. The boys would arrive at school with scratches, bruises and cuts."

Protesters lash out at CPS at Nassau hearingThe hearing was convened to review Nassau's own procedures after 8-year-old Thomas Valva died in Suffolk. Strangers mourn Thomas Valva: 'It goes straight to your heart'Word of 8-year-old Thomas Valva's death spread on Facebook, Twitter and across living rooms an ocean away. Strangers turned out by the hundreds. DSS mandates new safeguard for abuse, neglect casesOfficials announced the new policy two weeks after the death of Thomas Valva, 8, who was allegedly forced to sleep in an unheated garage. NYPD officer indicted in 8-year-old son's death, court papers sayMichael Valva and his fiancee were indicted on charges of second-degree murder and endangering the welfare of a child, according to court records.