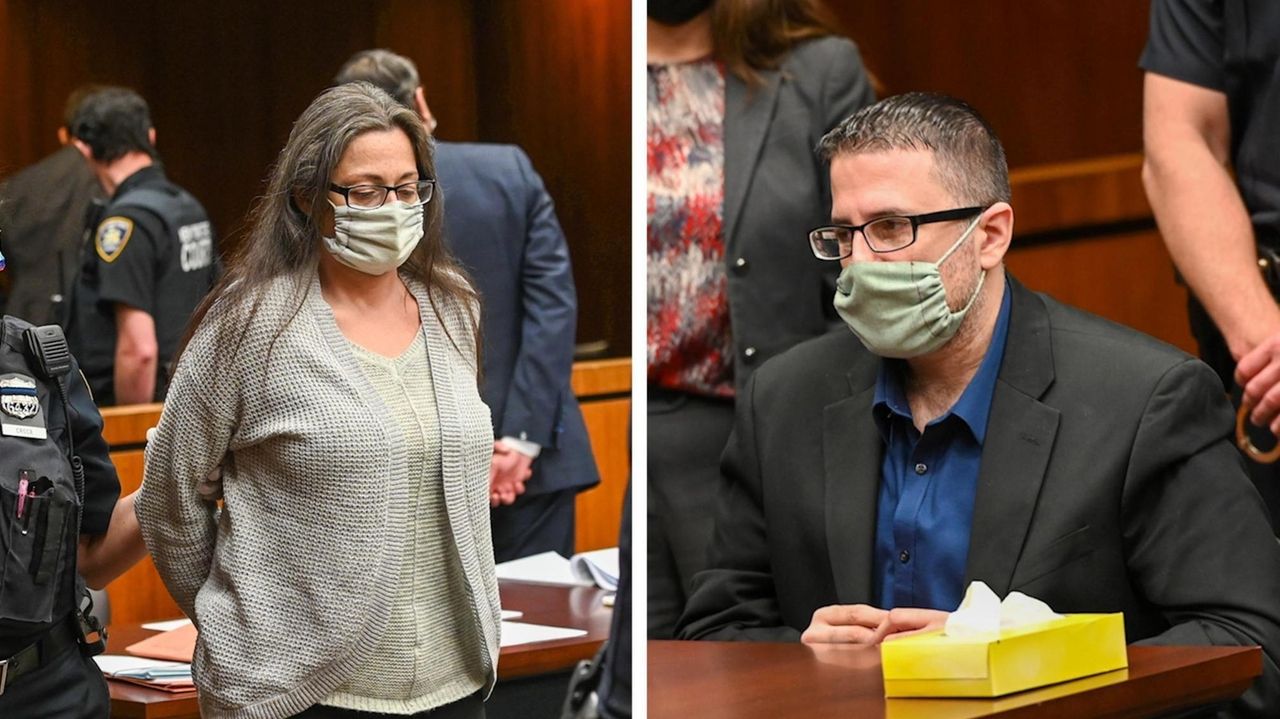 A Suffolk homicide detective who investigated the death of 8-year-old Thomas Valva testified Wednesday the woman then engaged to the boy's father allowed him to access the home’s surveillance video — key evidence that the defense wants thrown out.

Det. Michael Ronca testified during a pretrial hearing in Riverhead that Angela Pollina, the then-fiancee of Thomas’s father Michael Valva, an ex-NYPD officer, gave him the user name and password to the video system on the afternoon of Jan. 17, 2020, the same day that Thomas died from hypothermia.

"She gave me the password along with the user name," said Ronca. "It appeared to me she just provided it from her memory."

Prosecutors allege that Michael Valva and Pollina forced Thomas, who had autism, to sleep in a freezing garage without blankets before his death. Both have pleaded not guilty to second-degree murder and child endangerment related to Thomas’ death and the alleged abuse of both Thomas and his older brother, Anthony.

In another development Wednesday, Pollina’s defense attorney Matthew Tuohy, who has attempted to cast blame for Thomas’ death away from his client and toward Valva, told reporters that he’s "99.9% likely to call Pollina to testify" during the hearings.

Defense attorneys for Valva, 42, and Pollina, 43, have asked Supreme Court Justice William Condon to suppress video and audio from a surveillance system at their Center Moriches home, as well as other evidence and statements allegedly made by the defendants, arguing police began searching the house without permission or a search warrant.

Anthony LaPinta, one of Valva’s attorneys, repeated his assertion that police conducted an "improper search" of the Valva home.

"They had more than enough opportunity to obtain a warrant … and they didn’t," LaPinta said. "Our view is that the failure to obtain a judicial warrant is fatal to the admissibility of the evidence here."

Prosecutors have vigorously denied those allegations, saying the police presence and search of parts of the home was allowed because they were providing emergency services and investigating the circumstances of Thomas’ death.

But on cross-examination by LaPinta, the homicide detective, who had earlier testified his search area was limited to areas where he believed Thomas had been injured or treated — including the garage, basement and driveway — admitted that he had been in the living room with another detective and observed a surveillance camera on the wall.

Ronca also testified that a detective, who obtained video from a neighbor’s home with a view of the Valva driveway, had watched the video and did not see Thomas falling, as Valva had asserted to authorities.

Michael Valva, in a 911 call played in court Tuesday and in statements he made to police on the day Thomas died, said his son fell in the driveway as he ran for the school bus and hit his head, then stopped breathing.

"He stated he was able to see other children leave on the bus but he didn’t see any child falling," Ronca said of his fellow detective.

Ronca said he was still at the home when Valva and Pollina arrived back home about 2:11 p.m. following Thomas’ death at a hospital that morning. Ronca said the lead detective in the case, in the foyer of the home, asked Pollina for access to the camera system. Ronca said he had identified what appeared to be two different cameras systems outside the home — and several cameras inside the home, including in the den and living room — while conducting a walk-through of the areas where Thomas had been before his death.

"She agreed," Ronca said, referring to Pollina. "She said they can have access. She just needed to retrieve the password from a notebook upstairs."

Roca said Pollina was "upset," which he said was appropriate given the fact that Thomas had just died, but she walked upstairs with him willingly.

Once upstairs in the bedroom, Pollina retrieved a notebook from the closet, but did not consult it and just provided the information "from her memory," Ronca said, then spelling out the user name and password he was given.

Under questioning from prosecutor Kerriann Kelly, Ronca said neither Valva nor Pollina asked him or any of the Suffolk police officers to leave their home.

A short time later, Ronca testified, Valva "said out loud, ‘Can someone speak to my attorney?’" Ronca said.

Ronca said he spoke to Shana Curti, Valva’s divorce lawyer, who he said asked him to explain what was happening at the house.

"At any time that you were on the phone with her, did she ask you to leave that house?" Kelly asked.

Curti has said in a sworn statement, according to an earlier defense motion, that she told police to leave the home.

Ronca said his conversation with Curti lasted 20 to 30 seconds before he "passed the phone off" to the lead detective in the case. Ronca said police left the home a few minutes later because crime scene officers were "just about wrapped up in the garage."

The lead detective in the case is scheduled to testify Thursday.