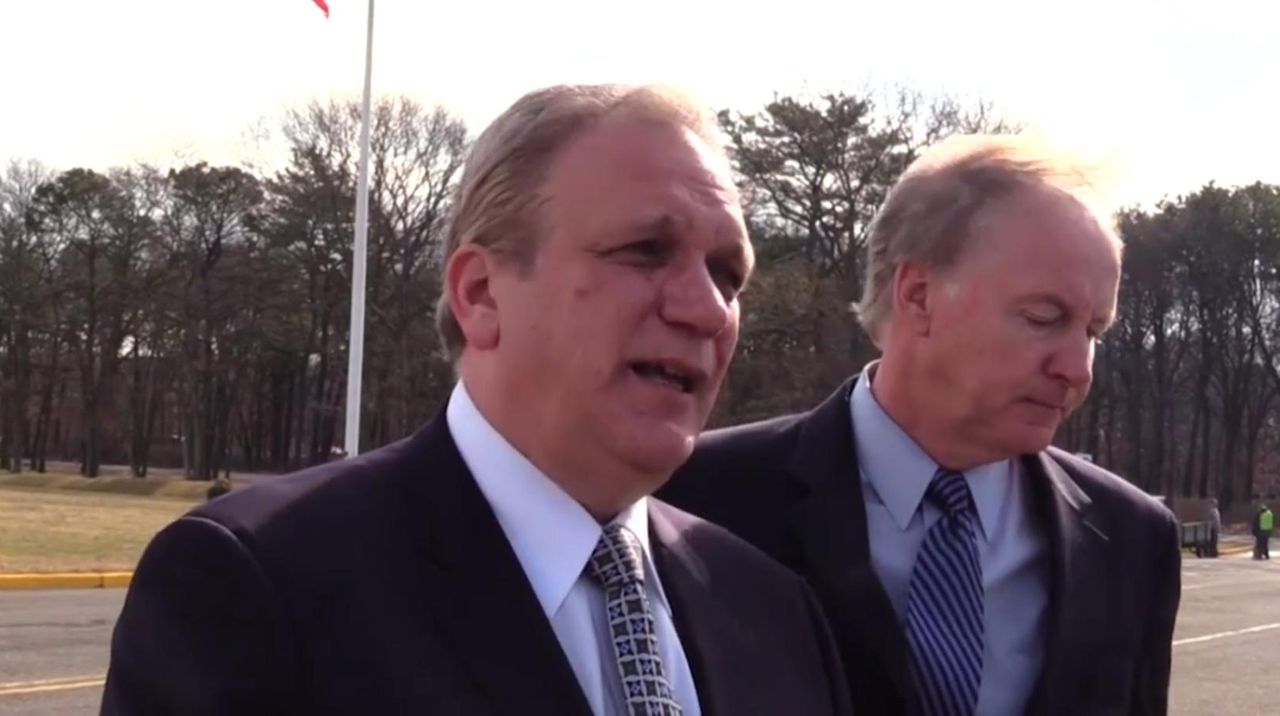 U.S. District Court Judge Joan M. Azrack set the date as Mangano and Venditto, along with Mangano’s wife, Linda, who is also charged, appeared in federal court for a status hearing on their case.

Assistant U.S. Attorney Catherine M. Mirabile said the government has already turned over 10,000 pages of pretrial documents to the defendants and intends shortly to hand over 10,000 more pages.

The judge set April 5 as the next court date.

Outside court, Mangano said the case has not affected his ability to govern, saying, “It’s really not been a distraction.”

Mangano’s lawyer, Kevin Keating of Garden City, has rebutted the allegations that the county executive was involved in a scheme to steer county contracts to a Long Island restaurateur.

“We are pleased the court has set a trial date,” he said Wednesday. “My client is innocent and we will have an opportunity to clear his name.”

The Mangano and Venditto case in under a minute Nassau County Executive Edward Mangano and Oyster Bay Town Supervisor John Venditto were arrested Oct. 20, 2016, and charged with conspiracy to commit federal program bribery and honest services fraud. Federal officials say Mangano and Venditto received bribes and kickbacks from a businessman who gave Mangano’s wife a lucrative no-show job the year her husband first took office. Here is everything you need to know about what happened on Thursday, in under a minute. Credit: News 12 Long Island, Ed Betz, Jim Staubitser

Mangano and Venditto were arrested in October and charged with receiving “bribes and kickbacks” from a businessman who also gave Mangano’s wife a lucrative no-show job, federal authorities said.

At their arraignments in October, all three pleaded not guilty through their attorneys and were each released on $500,000 bond.

The federal corruption charges center on a relationship involving Mangano, Venditto and a person identified only as a co-conspirator in the 13-count indictment, but whom sources identified as restaurateur Harendra Singh.

Republicans Mangano, 54, of Bethpage, and Venditto, 67, of North Massapequa, are charged with conspiracy to commit bribery, fraud and obstruction of justice.

Linda Mangano, 54, is charged with obstruction and making false statements. Prosecutors contend she received more than $450,000 from the no-show job from April 2010, months after her husband took office, to August 2014.

One of her phony jobs was to serve as a “food taster,” prosecutors said.

Authorities accuse Edward Mangano and Venditto of scheming to award the co-conspirator contracts worth hundreds of thousands of dollars to provide food services to county agencies and secure multimillion-dollar loan guarantees for his businesses.

In exchange, Mangano and Venditto received gifts from the co-conspirator, including “hotel and travel expenses, limousine services, free meals and other gifts,” according to the indictment.

Among the gifts Mangano received were a massage chair worth $3,600, an ergonomic office chair worth $3,300, a Panerai Luminor watch worth $7,300, and installation of hardwood flooring in his bedroom, authorities said.

In return for helping the businessman, Venditto got use of a private room at a restaurant, free chauffeur service for himself and his family, and discounted fundraisers at a restaurant, according to the indictment.

The restaurants are not identified in the indictment, but sources said the fundraisers were held at Woodlands at the Town of Oyster Bay golf course, previously operated by Singh, and the private room was at Singh’s now-defunct restaurant in Bethpage, H.R. Singletons.

If convicted of the top count, all three defendants face up to 20 years in prison. The charges resulted from an investigation by federal prosecutors, along with FBI and IRS agents.