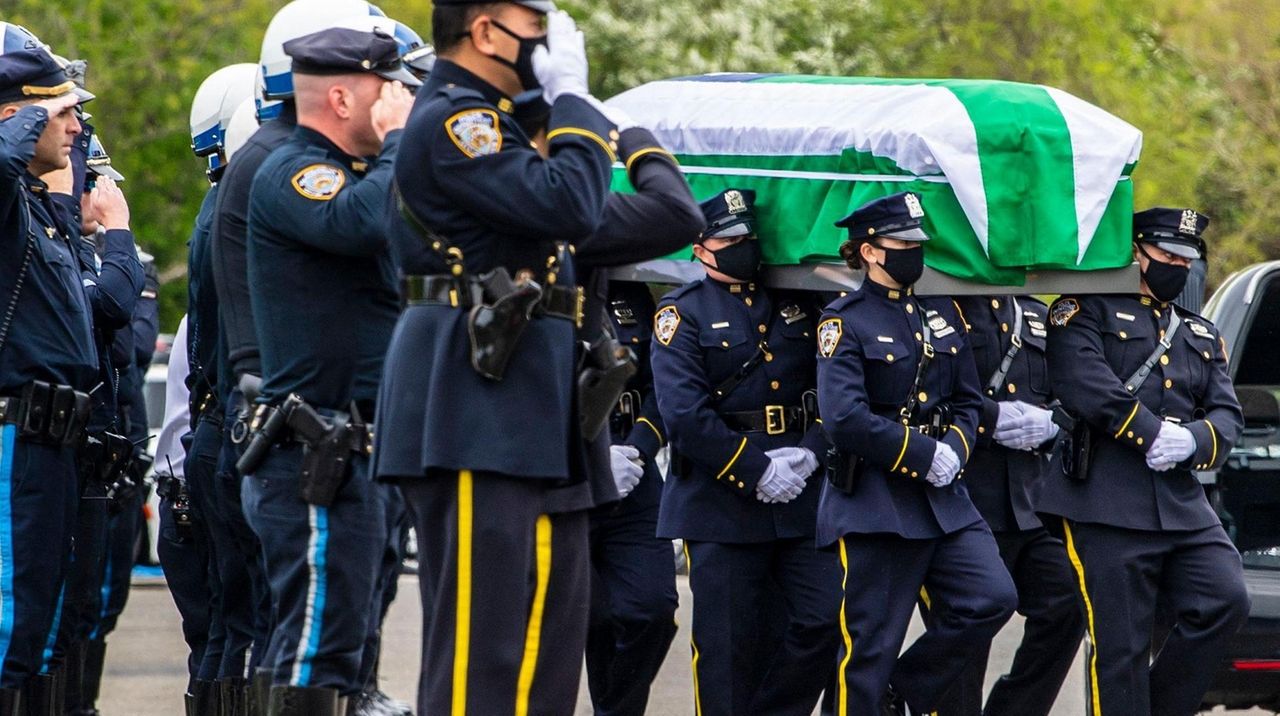 The wake for NYPD Officer Anastasios Tsakos, 43, who was fatally struck last week by a woman who is accused of speeding and drunken driving, was held Monday, as hundreds of police officers escorted the body from Astoria, Queens, to Greenlawn. Newsday's Cecilia Dowd reports. Credit: Newsday staff, Photo Credit: Tsakos Family

This story was reported by Robert Brodsky, Matthew Chayes, Cecilia Dowd, Keldy Ortiz and Dandan Zou. It was written by Brodsky and Chayes.

An infectious smile that could light up a room. His spotless uniform and meticulous police vehicle. That sardonic wit which could make always make his friends laugh, even when they didn't want to crack a smile. And an unwavering commitment to help anyone in need.

Anastasios Tsakos, 43, the NYPD officer from East Northport who was killed by an allegedly drunken, speeding driver on the Long Island Expressway last week, was one of a kind, recalled Lt. John Pappas, commanding officer of the city's Transit Bureau K-9 unit.

A throng of Tsakos' fellow officers joined family, friends and other mourners Monday as they filed into a Greenlawn church to pay their respects to the 14-year department veteran and father of two young children.

"We are going to the do the best we can to be there for him, for his family, for his parents," Pappas said outside of church. "That family just inherited … 35,000 moms and dads for those kids."

Tsakos' coffin arrived at St. Paraskevi Greek Orthodox Shrine Church for the seven-hour visitation in a black hearse, escorted by a caravan of hundreds — including officers from the NYPD, Suffolk County, Nassau County and state police, ambulances, motorcycles and other police vehicles.

With a light rain falling and officers standing in formation, the coffin, draped in the NYPD's white and green flag, was carried past an array of floral arrangements into the church. Overhead, two police helicopters circled, while bomb-sniffing dogs surrounded the building. Three NYPD vans carried Tsakos family members, who greeted NYPD officers stationed outside the church and went inside.

Pappas, who has known Tsakos since he joined the department, said it's a "heartbreaking" time for anyone who knew the man known affectionately as 'Tasso.'

"He tried to help his friends. He helped me personally; helped a lot of other people," Pappas said. "Very quietly in the background. And wanted zero recognition for it. Just wanted to be there for his friends and family. And that's why it's such a potent loss because he was a dynamite guy."

Kelly Fokianos’ husband, Michael, is an officer in Tsakos' Highway Patrol unit in Queens and worked with him for many years. Her children are about the same age as Tsakos’ 3-year-old son and 6-year-old daughter, and they live in the same town.

"It’s just a very tough day for everyone; for the NYPD, for all officers," Fokianos said outside the church as she wiped away tears. "They put their lives on the line and this could have happened to anyone. And it’s unfortunate because he had a lot of plans. And I’m here today to show support for all of them."

Fokianos said her husband and his colleagues are "trying to be as strong as they can, but I think they are really focused on trying to take care of the family. And just be there for them in any way that they need."

Tsakos was fatally struck as he directed traffic while responding to an earlier crash on the LIE in Queens during the early morning hours of April 27.

The driver, Jessica Beauvais, 32, of Hempstead, has been charged with 13 counts, including second-degree aggravated manslaughter and vehicular manslaughter, authorities said. A judge last week ordered Beauvais to be jailed without bail following her arraignment at Queens Criminal Court.

Tsakos' funeral is scheduled for Tuesday morning at the church followed by burial at Northport Rural Cemetery.

Two mourners, Dawn Cameron and Jennifer Martinico, live in Greenlawn and despite not knowing the officer, came out to watch the procession and pay their respects.

"It’s part of the community," Cameron said. "Cops help us and they don’t know us either. So we should back them up as well."

Martinico added that "I feel like we need to be all together and back the blue."

Pastor John Boyd of the New Greater Bethel Ministries in Queens Village met Tsakos several years ago when his church "adopted" the Highway Patrol Unit. Boyd said he got to known Tsakos as he brought breakfast to the officers.

"When you have the opportunity to meet these officers one on one, you take off your hat and appreciate what [they] do," Boyd said.

Tsakos joined the NYPD in January 2007 and was assigned to Highway Unit 3 in August 2014, the NYPD said. His death is the first NYPD line-of-duty death this year, the department said.

A GoFundMe page set up to help support Tsakos' family raised more than $213,000 as of Monday evening. A separate fundraiser set up by a crowdfunding platform for police and military families has raised nearly $84,000 so far.

And on Monday, COPSHOT, the business-backed tip line for information about those who shoot police officers, pledged $10,000 to Tsakos' widow and children, according to spokesman Steve Mangione.

Jim Mastoras of Bayside a family friend of 16 years, said he will remember Tasso's smile and ability to make everyone around him burst out in laughter.

"He was a good guy," Mastoras said. "Didn't deserve it. Nobody deserves this but especially him."

Arthur Meyer, a founder of LI's Friends World College, dies at 96
Voting begins: Islanders decide on board candidates, budgets
0:48
Survey: Millennials of color unsure if Long Island can meet their expectations
National Grid seeks 2-year rate hike of $5.35 a month
NYC Marathon set for Nov. 7 with 33,000 runners
Housekeeper testifies for the defense about day Thomas Valva died
Didn’t find what you were looking for?