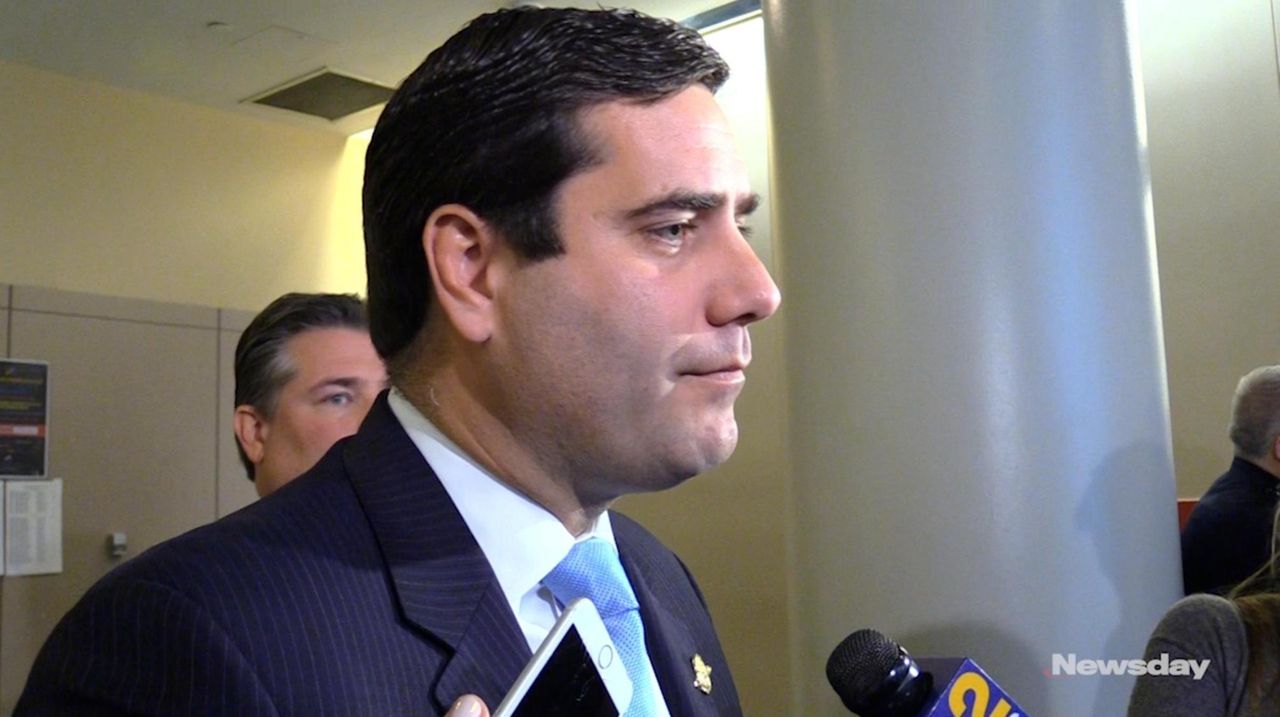 Suffolk County District Attorney Timothy Sini announced Monday that an Uber driver has been charged with second-degree manslaughter in the death of a 15-year-old boy who fell from the roof of the driver’s vehicle while “car surfing” — a thrill-seeking activity — after a night of drinking in September. Credit: James Carbone

Suffolk County prosecutors charged an Uber driver with second-degree manslaughter Monday in the death of a 15-year-old Cold Spring Harbor boy who fell from the roof of the driver’s vehicle while “car surfing” in September.

Danyal Cheema, 24, of Huntington Station, faces a maximum sentence of 5 to 15 years in prison if found guilty, Suffolk County District Attorney Timothy Sini said at a news conference shortly after Cheema pleaded not guilty at his arraignment Monday in First District Court in Central Islip.

The death of Ryan Mullen, a student at St. Anthony’s High School, may have been the result of a tragic accident, but Sini said the manslaughter charge is appropriate because the case involves a death.

“The defendant made a reckless decision and engaged in reckless conduct that caused the death of a young boy, and he will be held accountable,” Sini said.

Under the law, second-degree manslaughter means disregarding an obvious risk and causing a death as a result of reckless conduct.

Ryan's mother, Janice Mullen, told WABC-TV's "Eyewitness News" on Monday: "There was an adult present, and the adult should have said, 'No, that's a bad decision. You're not allowed to do that.’ ” Ryan's father, Matthew, asked: "What if the driver was responsible enough to say no?"

Cheema’s attorney, Christopher Renfroe, said in court that his client has expressed remorse for Mullen’s death and does not have a prior criminal record. Cheema’s family attended Monday’s arraignment but declined to speak to reporters. Renfroe also declined to comment and did not return a later call from Newsday.

A spokeswoman for Uber said the company is cooperating with an ongoing investigation by the district attorney’s office and Suffolk County police.

Sini said Mullen attended several parties in the Cold Spring Harbor area before he and two friends, both 16, contacted Uber. Mullen and his friends, Sini said, had been drinking, and investigators are trying to determine how the teens obtained the alcohol.

The boys first offered Cheema $70 to let two of them ride atop his 2010 Toyota Highlander while the third recorded a video, Sini said. They withdrew the offer after deciding $70 was too much, but later offered Cheema $40 if he let them car surf.

Mullen and another boy climbed on the roof of Cheema’s SUV while the third teen videotaped them on Snapchat, a social media site, Sini said. Mullen fell from the Highlander as it drove away on Cove Road in Huntington early on the morning of Sept. 23, striking his head on the pavement. He sustained a fractured skull, Sini said.

Mullen returned home and died in his sleep later that morning. “The cause of death was blunt-force trauma to the head,” Sini said.

Brother Gary Cregan, St. Anthony's principal, said in a statement: "Ryan, his family, and his friends remain in our daily thoughts and prayers.”

Car surfing, according to the federal Centers for Disease Control and Prevention, involves riding on the top or exterior of a moving vehicle driven by another person. Fifty-eight people, mostly young men between the ages of 15 and 19, died as a result of car surfing between 1990 and 2008, the CDC reported in 2008.

Sini said he does not believe car surfing has become a fad among Long Island teens, but he fears social media encourages young people to take foolish risks.

“We have a culture right now where the mindset is, ‘How can we outdo each other?’ particularly among young people on social media, and we often see the tragic consequences of that,” Sini said. “A lot of young people think they are invincible, and that’s something we need to keep drilling in their heads — that this could happen to anyone when you engage in this kind of conduct.”

A Westbury man pleaded guilty last year to second-degree manslaughter and other charges in a similar case, according to Nassau County District Attorney Madeline Singas’ office. Singas said Herbie McLeod knew two teen girls were sitting on the trunk of his BMW when he speeded away in New Cassel in July 2015. Both girls fell and landed on the street; one of the girls, Sabrina Paul, died after suffering from skull fractures and brain swelling. McLeod was sentenced to 4 to 8 years in prison.

A spokeswoman for Sini's office said Suffolk prosecutors are not aware of similar cases in the county.

An Uber spokeswoman said in an email: “Words cannot describe how deeply troubled we are by this incident. Our thoughts are with the rider’s family during this difficult time. This driver has been permanently removed from the app.”

Health insurance cost increases jump back to pre-pandemic pace
Legendary teacher with school named after him to have plaque dedicated in his honor
Seniors Calendar: Events from Oct. 31 to Nov. 7
Way to Go! Student named International Thespian Officer
Way to Go! Student cycles for cancer research
Asking the Clergy: What is All Souls' Day all about?
Didn’t find what you were looking for?